Along with the news of the death of senior Al Qaeda operative Abu Mohammed al-Masri came the news that his daughter, Maryam, who was also a target in the operation, was being groomed for a leadership role in the terrorist organization.

Maryam was the widow of Hamza bin Laden, the son of one of Al Qaeda founders Osama bin Laden, the AP reported. The younger bin Laden was killed last year, and Maryam had been living in Iran.

Terrorist organizations seem to predominantly be made up of men and almost exclusively are headed by men. Of the 27 individuals on the United States FBI’s most wanted terrorism list, only two are women.

One is wanted for domestic terrorism in the US; the other is a Jordanian national who earned her spot on the list for participating in 2001 suicide bomb attack in Jerusalem.

“The perception that women can only be victims of terrorism or violence is indeed problematic,” read one 2016 report from the Global Center on Cooperative Security.

While the role of women in terrorist organizations is often underestimated and underreported on, they have made headlines for extremist acts over the last four decades.

Brief history of women and extremism

More recently, Nigeria’s Boko Haram female members have emerged as some of the group’s most effective members, killing more than 1,200 people in the 2014-2018 period, also comprising almost two-thirds of the group’s suicide attackers.

Typically, women are more prominently associated with recruitment and operational support roles. In the United States, a network of 15 women was charged in 2014 for transferring funds to Al-Shabab in Somalia, using small transactions and coded language.
But when women do take part in combat missions, the effects are deadly.

According to a 2019 discussion paper by the Council of Foreign Relations, “female suicide attacks are more lethal on average than those conducted by men.” 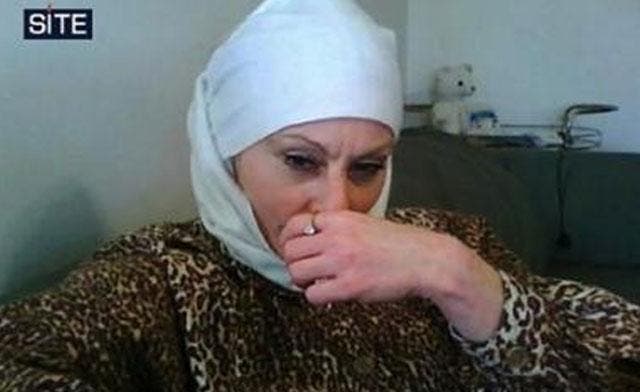 Colleen LaRose, known by the self-created pseudonym of “Jihad Jane,” is pictured in this a photo released by Site Intelligence Group on March 10, 2010. LaRose pleaded guilty to terrorism charges related to a plot to kill a Swedish cartoonist and attempts to recruit fighters via the Internet to commit violent attacks overseas.

In 2016, women constituted around 26 percent of all those arrested on terrorism charges across the European Union.

In 2017, Global Extremism Monitor registered 100 distinct suicide attacks conducted by 181 female militants, which made up 11 percent of overall incidents that year.

The public role of women among the extremist groups’ ranks represents a novel phenomenon, however. Nearly a decade ago, the BBC reported that there had seemed to be a shift in Al Qaeda regarding the acceptance of women in armed actions.

“While the traditional jihadists limit women’s participation in jihad to supporting militant men in activities such as nursing, teaching, and moral support, the new ideologues have begun to mention female participation in armed actions in their literature recently,” Hassan Abu Haniya told BBC at the time.

Perhaps the most infamous among them was American Colleen LaRose who used the nom de guerre Jihad Jane. In 2014, she was sentenced to 10 years in prison for her role in a failed plot to kill a Swedish artist who had depicted the head of the Muslim Prophet Mohammad on a dog, Reuters reported.