The FBI is investigating whether foreign governments, organisations or individuals provided financial support to people who helped plan and execute the January 6 attack on the Capitol, a news report said on Sunday.

As part of the investigation, the FBI is examining payments of $500,000 in bitcoin, apparently by a French national, to key figures and groups in the far right before the riot, one current and one former FBI official told NBC News.

The payments were documented and posted online last week by a company that analyses cryptocurrency transfers. Bitcoin payments can be traced because they are documented on a public ledger.

The current FBI official was quoted as saying the bitcoin transfers appear to have been made by a French computer programmer who took his own life on December 8 last year after triggering the transfers, according to French media.

The cryptocurrency payments prompted the FBI to examine whether any of the money was used to fund illegal acts, which, if true, raises the possibility of money-laundering and conspiracy charges, the FBI official said.

On December 8, Chainalysis reported the donor sent 28.15 BTC – worth about $522,000 at the time of transfer – to 22 separate addresses, many of which belong to far-right activists.

Separately, a joint threat assessment issued last week by the FBI, the Department of Homeland Security, and various other federal and DC-area police agencies noted since the deadly January 6 riot, “Russian, Iranian, and Chinese influence actors have seized the opportunity to amplify narratives in furtherance of their policy interest amid the presidential transition.”

“In at least one instance, a Russian proxy claimed that ANTIFA members disguised themselves as supporters of President Trump, and were responsible for storming the Capitol building.”

Chinese media, meanwhile, “have seized the story to denigrate US democratic governance, casting the United States as broadly in decline – and to justify China’s crackdown on protesters in Hong Kong”.

The examination of possible foreign influence related to the Capitol riot, which involves the FBI’s counterintelligence division, comes after years of what current and former FBI officials say is mounting evidence that Russia and other foreign adversaries have sought to secretly support “political extremists” on the far right and far left.

Law enforcement officials and security analysts say there has long been “a mutual affection between Western white supremacists and the Russian government”, as two scholars put it in a February paper on the JustSecurity website.

Some senators were concerned enough about the issue that they inserted a requirement in the 2021 defence bill that the Pentagon “report to Congress on the extent of Russian support for ‘racially and ethnically motivated violent extremist groups and networks in Europe and the United States’ – and what can be done to counter it”.

Fuentes, who spoke at pro-Trump rallies last year in Michigan and Washington, DC, told the ProPublica news organisation he was at the “Stop the Steal” rally on Wednesday, January 6, but did not follow the mob into the Capitol.

One group of Fuentes’ supporters, which calls itself the Groyper Army, was filmed running through the Capitol carrying a large blue flag with the America First logo, ProPublica reported.

“We’re looking at and treating this just like a significant international counter-terrorism or counter-intelligence operation,” Michael Sherwin, the US attorney in Washington, DC, said at a news briefing last week. 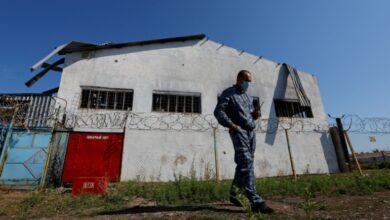 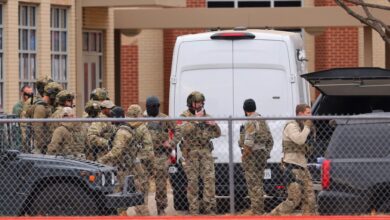