In 1851, the Great Exhibition set out to bring culture, history and innovations together in one place — London — for the world to see. Since this inaugural world expo, however, more than 85 percent of the global events have been hosted by either European or North American cities.

Some notable exceptions are the expos held in Asia, including Osaka in 1970, Aichi in 2005 and Shanghai in 2010, almost all of which set attendance records. But to date, these major events have been predominantly northern and western hemisphere affairs.

That is why Expo 2020 Dubai has been such a big deal, not just for world expos but also for the Middle East and North Africa region as a whole, with the Arab world occupying center stage for the first time.

As host, the UAE has offered the very essence of Arab hospitality, first by dedicating a pavilion to every participating nation, and, second, by giving every nation its own “national day” throughout the event. Saudi Arabia’s day fell on Jan. 7.

Expo 2020 Dubai has also had a distinctly Arab feel. The site is peppered with traditional Arabic design features, on its sunshades, water fountains and even public seating.

It is a well-known expo fact that pavilion positioning is everything, often indicating a nation’s global significance and its relationship with the host. With masterful design planning, the UAE was able to place participating Arab countries at the heart of the action, giving them greater visibility and prominence.

Naturally, the UAE pavilion is the largest, occupying the prime position. Its immediate neighbor is the impressive, world record-setting Saudi Arabian pavilion, and close by are Morocco, Palestine, Egypt, Kuwait and other Arab countries.

Many Arab pavilions are thoughtfully designed, with enormous curb appeal and cultural significance. They are also among the largest in the expo, and several have already been earmarked to remain as permanent structures on the site, tied to their nations as cultural centers after the event concludes.

While the expo lives up to its theme of “Connecting Minds, Creating the Future,” it also offers a visible celebration of Arab cultures and nations on a global stage.

World expos have long been used by participating states to present a national narrative, which are often framed to project the country in the most marketable way possible in order to boost trade and tourism.

Nations use the events to communicate aspects of their culture and heritage, create mutual understanding, and shape global public opinion through art, innovation, entrepreneurship, technology and policy.

Arab pavilions at Expo 2020 Dubai each tell a different story. However, a series of common themes has emerged: Celebrations of heritage; concrete and incisive approaches to the future; and a focus on cultural, social and environmental sustainability.

Themes celebrating the past are normally divided between the ancient past, such as the Bronze Age settlements of Failaka Island in Kuwait, and the more recent past, before the rapid urbanization of the last half-century.

Indeed, the Arab pavilions go to great lengths to pay homage to the feats and wisdom of past generations. For example, the first exhibit in the UAE pavilion features a stylized desert, with the soft, fine sand of Emirati dunes used as a projection surface for old film reels paying tribute to Sheikh Zayed Al-Nahyan, the UAE’s founding father.

In the nearby Vision Pavilion, dedicated to Sheikh Mohammed bin Rashid Al-Maktoum, a guided video tour begins with the story of his stay with a Bedouin leader in the desert as a child, and the lasting impact that connection with the land made on him as a leader.

In the Saudi pavilion, ancient cultural sites, such as the tombs in Al-Hijr, At-Turaif District and the AlUla valley, are featured in a striking visual tour of the rich cultural history and natural beauty of the Kingdom.

In the Oman pavilion, meanwhile, a focus on frankincense highlights the sultanate’s eye-catching landscape and long trading history.

Far from focusing exclusively on their glorious past, Arab pavilions look to the future. Many have a concrete vision that highlights targets set in order to achieve desired development outcomes.

Saudi Arabia has put sustainability at the heart of its vision for the future, Vision 2030, which seeks to diversify its economy, alongside a pledge to reach net-zero carbon emissions by 2060.

Egypt has its own Vision 2030 plan, announced in 2016, which sets out eight national targets aligned with the UN’s Sustainable Development Goals, focusing on an inclusive economy, education and the environment.

Sustainability is a prominent theme across all Arab pavilions, with a particular focus on passing cultural riches, knowledge and prosperity on to the next generation.

In this vein, Kuwait’s pavilion addresses the resilience of its earliest settlements, while a stylized water tower at the pavilion’s center highlights the ways in which humans have carefully managed its natural resources in order to flourish there.

Exhibits in the pavilion also focus on Kuwait’s system of democracy and investment in its young people.

The theme of overcoming adversity can be found in several pavilions belonging to Arab states that have endured conflict and economic instability.

Although Lebanon’s pavilion is much more austere compared with other Arab offerings, its message is a strong reminder of the resilience of its people. 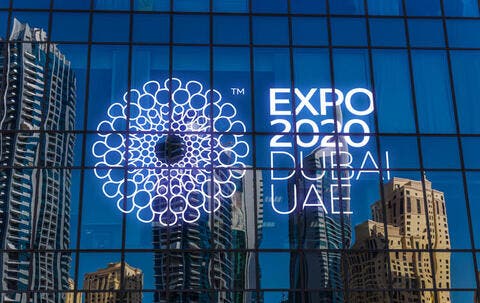 Given the multitude of challenges the nation is facing, the pavilion’s presence is a powerful statement in its own right. Like Kuwait, the pavilion’s content focuses on the country’s youth, particularly its artists.

Taken together, Arab participants in Expo 2020 Dubai have made good use of this global stage to highlight their achievements, heritage, ambitions and fortitude. In this sense, the expo can be considered an Arab triumph. The photographer who puts little people in the frame

‘I am a Genius’: Pakistani Man With No Arms Becomes a Great Snooker Champ