Expats in the UAE are sewing pouches and blankets for the animals affected in Australia’s ongoing bushfire crisis, which has already killed more than a billion creatures.

Different communities in the country have teamed up to contribute to the Australia-based Animal Rescue Craft Guild – a volunteer-run group focusing on animal rescue efforts.

“There is a large crafts community here that is sewing pouches for kangaroo joeys; mittens to cover koalas’ paws; and bat and possum wraps,” said Philly Johnston, a Kiwi expat in Dubai who is overseeing the efforts.

Johnston started her efforts about eight days ago and, now, there are already more than 50 residents on board, making hundreds of pouches and other protective wear for orphaned and injured animals. On Sunday, they completed about 300 pouches.

“These pouches and wraps can really keep the animals warm, safe and secure,” she said.

Johnston said residents are using their spare fabric, buying new ones, using their T-shirts and bed sheets, or are donating fabric to sew these pouches together.

“For now, we’ve been asked to put on hold any future crafting so they can make use of what they’ve got.

“People have been contacting me on Facebook and they really got behind this initiative to make a difference. There are a few different groups on Facebook that are contributing to the efforts of the Animal Rescue Craft Guild,” Johnston said.

“I think it is incredibly important to help. I understand about a third of the koala population have died, and it is estimated that one billion animals have been killed in the fires and their aftermath. This is something that could easily have happened in any of our home countries.

“I think this is part of what being an expat is all about: Helping from far away, making new friends, and giving what we can to those who need it.”

An Australian expat in Dubai, Anette Carey, is one of the volunteers who is using her craft skills to help in the bushfire relief.

“Seeing all the photos and everything that’s been happening, you feel like you have to do your bit. I was really touched that we all came to the fore. It’s really heartwarming to see how everyone has come forward as a unified group to help out,” she said.

Carey plans to visit Australia after the fires to help the community “get back on their feet”.

In Pictures: New Year celebrations around the world 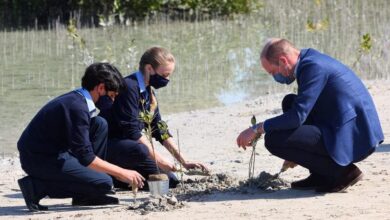 Sexual Assaults in US Military Academies Shoot up – Pentagon

Should You Worry About Your Pets Catching Coronavirus?