Just so you know where I’m coming from, I think a great city is one that contains a Dries van Noten store, with the Belgian designer’s trademark daffodil yellow silk wallpaper, sumptuous upholstery and clothes that everyone of all shapes and ages can wear, if not afford. Antwerp is such a place.

Dries van Noten is among the huge fashion talents that helped give Antwerp a reputation as one of the most intriguing cities in northern Europe, particularly if you are interested in fashion and design.

He was a graduate of the city’s exceptional Royal Academy of Fine Arts, alongside a small group of distinguished contemporaries that included Ann DeMeulemeester and Martin Margiela. Known as the Antwerp Six, they became as influential on the 1980s fashion scene as Italians such as Giorgio Armani and Gianni Versace, similarly stamping out their particular aesthetic.

Antwerp is further proof that if you want to seek out a city with an exciting creative scene, look for one with a great art school.

The famous fashion museum MoMu, which is also a big part of the city’s fashion heritage, is being renovated but is a must-visit for anyone interested in clothes when it reopens next year.

Thirty years after the Antwerp Six came of age, the city has become a most delicious short-break destination.

It is small enough to explore easily, but rich in discoveries. Many of the chief historical sites, such as the Rubenshuis, the beautiful home of the artist Sir Peter Paul Rubens – where I learnt that he slept sitting up, hence his curious, small bed – are in the centre of town, near the best shopping streets for contemporary and vintage fashion.

Although you can find every high-street fashion name around Meir, the city’s main shopping street, Antwerp is also home to many small, unique shops and concept stores where you will stumble across Belgian designers as well as international names.

The Belgium school of fashion has a reputation for an androgynous, dark style, but nowadays the shop windows are filled with colour and pattern. The knitwear is particularly tempting.

If you visit only one shop, make it Graanmarkt 13, set in a tree- lined square near the Rubenshuis. There’s a mix of homeware, clothes, bathing products and general knick-knacks, with almost everything new to me.

Clothes included home-town mother-and-daughter brand Bernadette, with its range of printed silk dresses and shirts, minimalist designer Sofie D’Hoore, who specialises in sumptuous neutral-toned outfits, and pieces by Christian Wijnants, one of the country’s most successful fashion names.

But it was the small and relatively inexpensive items that were irresistible – beautiful blocks of Japanese notepaper, weighty and chic glass tumblers, woven Guatemalen rugs and delicious soaps and oils.

I wasn’t there to browse the diamond shops, of which there are said to be about 1,500, but there were plenty of other treasures to find – Antwerp is a vintage mecca.

Labels Inc, one of the best stores, is on the unprepossessing Nationalestraat which houses many good boutiques. There you will find second-hand bargains from Dries and Margiela, and other desirable brands such as Loewe, and Comme des Garcons. Just leave enough time to really rifle through.

While the city is famous for fashion design, there is also an exceptional range of furniture and lighting, both old and new, to be found. Head to Kloosterstraat to find stores selling high-end, mid-century antiques as well as more idiosyncratic and cheaper pieces. Such is the variety that you will wish you were returning home with a trailer, rather than on Eurostar as I was.

Antwerp’s range of architecture is fascinating. Among the impressive merchant buildings of the Het Zuid district, near the industrial riverside, you will find FOMU, a huge photography museum sited in an old warehouse that hosts innovative and original exhibitions as well as a permanent collection.

We visited in winter and were enchanted by the carmine sunsets over the Scheldt river where, during warmer months, there are great open-air eating spots.

In contrast, Cogels Osylei, in the Zurenborg quarter, regarded by some as the most elegant street in Antwerp, contains extraordinary art nouveau buildings with the kind of intact original tiling and mosaics you can rarely find.

Exploring is hungry work, and I certainly ate and drank my fair share over two days. Hotel Franq, a converted townhouse where I stayed, was a successful random pick. Its beautiful bar is a great place for a pre-dinner cocktail if you want somewhere more glamorous than the many artisanal beer hang-outs.

Like many northern European cities, cafes and pastries are a big thing, and Cafe Imperial, although in the tourist centre, is a pleasant place to indulge.

It’s oddly difficult to find a good sandwich – but fries are also a big thing, and Frites Atelier is a fantastic lunch spot with the best chips in town, jars of specialist mayonnaise and a glass of wine if you wish.

My top tips: Many shops, museums and restaurants are closed on either Sundays, Mondays or Tuesdays. There is a good metro and tram network (no Uber, and taxis are scarce). Antwerp is walkable, although the streets are often cobbled so not suitable for high heels.

Everyone speaks English, but it’s hard to find an ATM should you want to carry cash to strike a bargain in all those vintage stores.

Saudis Flock to Tabuk to Play With The Heavy Snow

The Secret Art of Painting on Water by Garip Ay 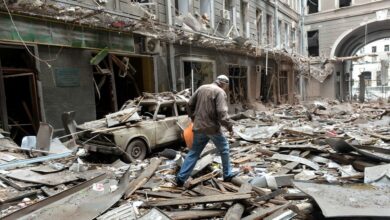