The European Union’s foreign policy chief said Sunday that he’s deeply concerned about tensions in Bosnia and has appealed to leaders there to avoid the breakup of the Balkan country.

“The situation in Bosnia is more worrying than ever. It was never easy, but now the centrifugal tendencies are really very worrying,” Josep Borrell, the EU’s high representative for foreign policy, said at an annual security conference in Munich.

Last month, the Biden administration announced new sanctions against Bosnian Serb leader Milorad Dodik, who has for years been advocating that the Serb-run part of Bosnia leave the rest of the country and unite with neighboring Serbia. The US accused him of “corrupt activities” that threaten to destabilize the region and undermine a US-brokered peace accord from more than 25 years ago.

“I can assure you that, in close contact with the United States, I and Secretary of State (Anthony) Blinken have issued a very serious warning. We will not accept the breakup and disintegration of Bosnia and Herzegovina,” Borrell said.

He said he had been in contact with Dodik “to ask him to recall his duty to participate in the common institutions” of the country.

“I appeal to the responsibility of the political leaders of Bosnia-Herzegovina to avoid the breakup of the country,” Borrell said.

The Dayton Peace Accord ended Bosnia’s war, which killed more than 100,000 people and left millions homeless in the worst carnage in Europe since World War II. The accord established two separate governing entities in Bosnia — one run by Bosnia’s Serbs and the other dominated by the country’s Bosniaks and Croats.

The two are linked by shared, state-wide institutions, and all actions at a national level require consensus from all three ethnic groups.

Dodik says he and Bosnian Serbs are being unfairly picked on by the US and wrongly accused of corruption. 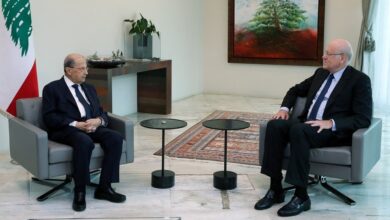