The Modern Family star suits up as Fizbo, his clown alter ego, for one final time in the ABC sitcom’s final season episode titled “Paris.”

“From as far back as I can remember, all I ever wanted was to be a clown in the circus. My dad named me Fizbo, my grandma made all my clown suits, and my parents allowed me to be the kid that raised pigs, played drums, took karate [played] football, AND put makeup and wigs on from time to time. All of that led to the moment in 2009 when two writers, Brad Walsh and Paul Corrigan wrote a draft of Modern Family called ‘Fizbo’ and you were introduced to Fizbo, the ass-kicking clown, that will twist you like a balloon animal,” Stonestreet wrote in a note posted to Twitter.

“[Wednesday] you’ll see Fizbo one last time. I think Grandma Louise would be proud that her little clown made it all the way from Kanas City, KS to the streets of Paris, France. When you met Fizbo 11 years ago, Cam said, ‘Hello, old friend.’ [Wednesday], I get to say, goodbye old friend. Thank you Modern Family for allowing me to fulfill my dream of being a clown in the biggest circus of them all. Hollywood,” he concluded. 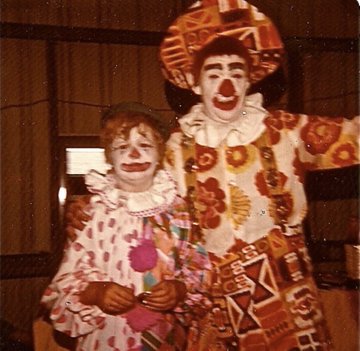 The tweet also featured photos of Stonestreet as a kid dressed up as Fizbo, along with his relatives mentioned in the note.

In the episode, the family goes to Paris so Jay (Ed O’Neill) can accept a lifetime achievement award for his work in the closet industry. Claire (Julie Bowen) has a secret rendezvous and Cam fulfills his lifelong dream of performing as Fizbo on the streets of Paris. But is Fizbo’s performance one for the record books? Guest stars include Arnaud Binard as Guy, Jean-Francois Pages as Bernard Busse and Jean-Pierre Pivolot as Fizbeau.