“We appreciate the efforts to get Ukraine into the EU. But I say to these EU members, why are you still worried about taking Turkey into the EU. Show the same sensitivity for Turkey as you do about Ukraine,” he said.

“Will you put Turkey on your agenda when someone attacks [us] too?” he added.

Turkey is formally a candidate for EU membership, but its bid to join the bloc has been at a standstill for years over European concerns of the country’s human rights record and Erdogan’s aggressive foreign policy manoeuvres in the Mediterranean Sea.

Russia launched a comprehensive assault on Ukraine on February 24 that saw hundreds injured and killed dozens of civilians according to Kyiv’s authorities.

Despite crippling and wide-ranging sanctions imposed on Russia by the US and the EU, President Vladimir Putin shows no signs of relenting.

The EU has taken unprecedented steps to support Ukraine in its fight against the Russian assault, including financing the purchase and delivery of weapons and other equipment worth 450 million euros ($505 million).

However, many EU leaders have acknowledged that granting Ukraine immediate EU candidate status will be difficult. 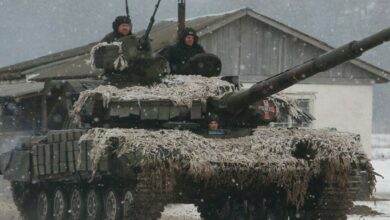