President Recep Tayyip Erdogan has dragged Turkey into Libya partly to secure his own domestic support by appealing to the public’s “nationalistic” sentiment, experts say.

Erdogan has framed Ankara sending soldiers and drones to war-torn Libya as helping a “neighboring country,” which shares “maritime borderlines in the Mediterranean Sea.” Turkey and Libya share no land borders.

Erdogan’s involvement in Libya is not motivated by neighborly goodwill, according to expert Henri Barkey, but instead a desire to expand Ankara’s influence in the region.

“It is really for nationalist reasons,” said Barkey, a professor of international relations at Lehigh University and expert at the Council on Foreign Relations, in an interview with Al Arabiya English.

Turkey became directly involved in Libya in January when its parliament approved Erdogan’s proposal to deploy troops to Tripoli, to help the Government of National Accord (GNA) compete for power of the country against the Libyan National Army (LNA). 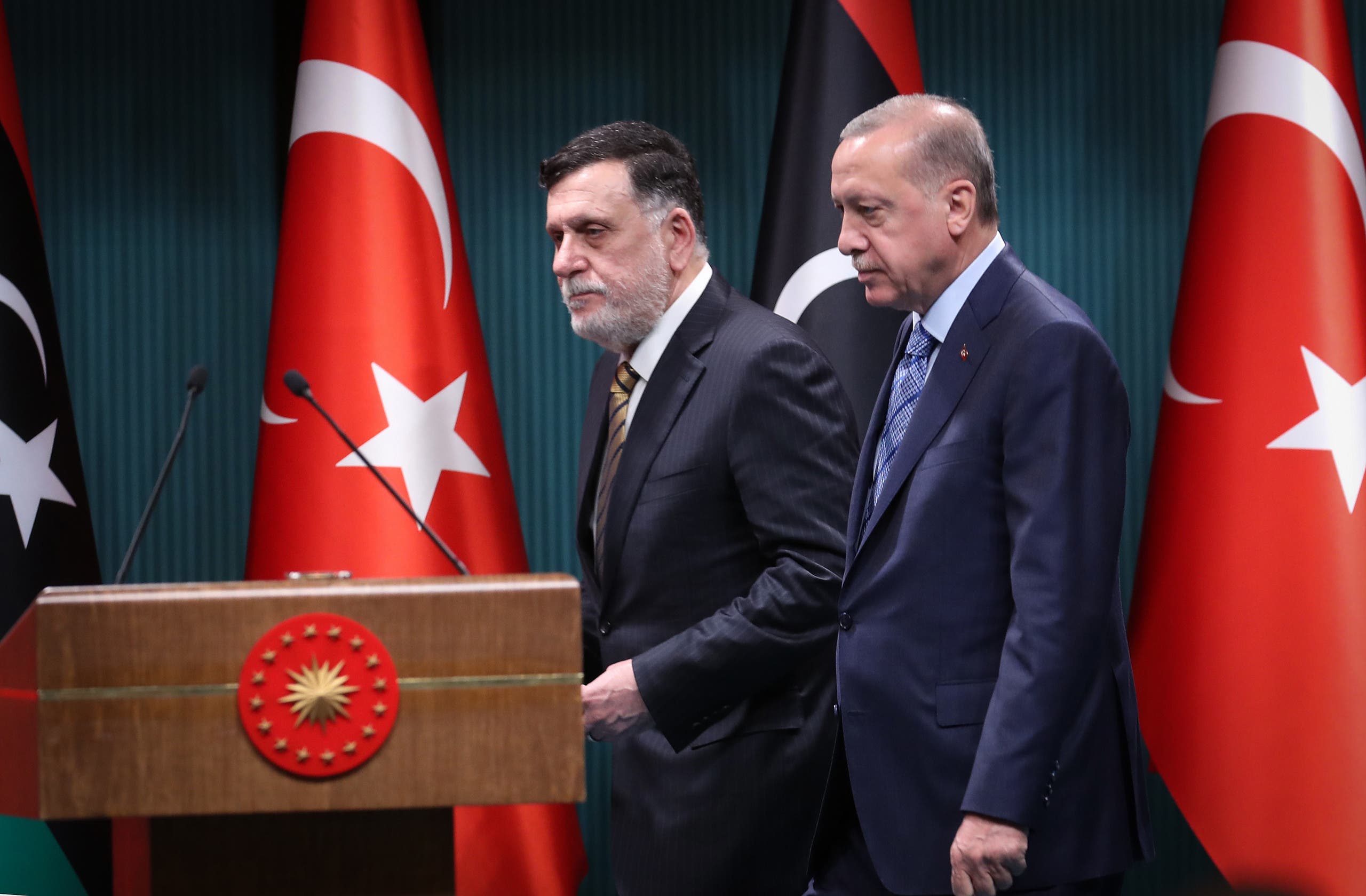 The deployment came after Turkey signed an agreement with the GNA regarding maritime boundaries in the gas-rich eastern Mediterranean Sea, which awarded Ankara 200 miles of the sea for gas exploration.

In addition to expanding its presence at sea, Ankara “makes no secret” of wanting to establish its land presence with military bases in Libya, according to Barkey.

Turkish public support of the intervention seems to have increased since January, when a poll by market research firm Istanbul Ekonomi Arastirma found that 58 percent of Turkish people disapproved of the deployment of soldiers to Libya. 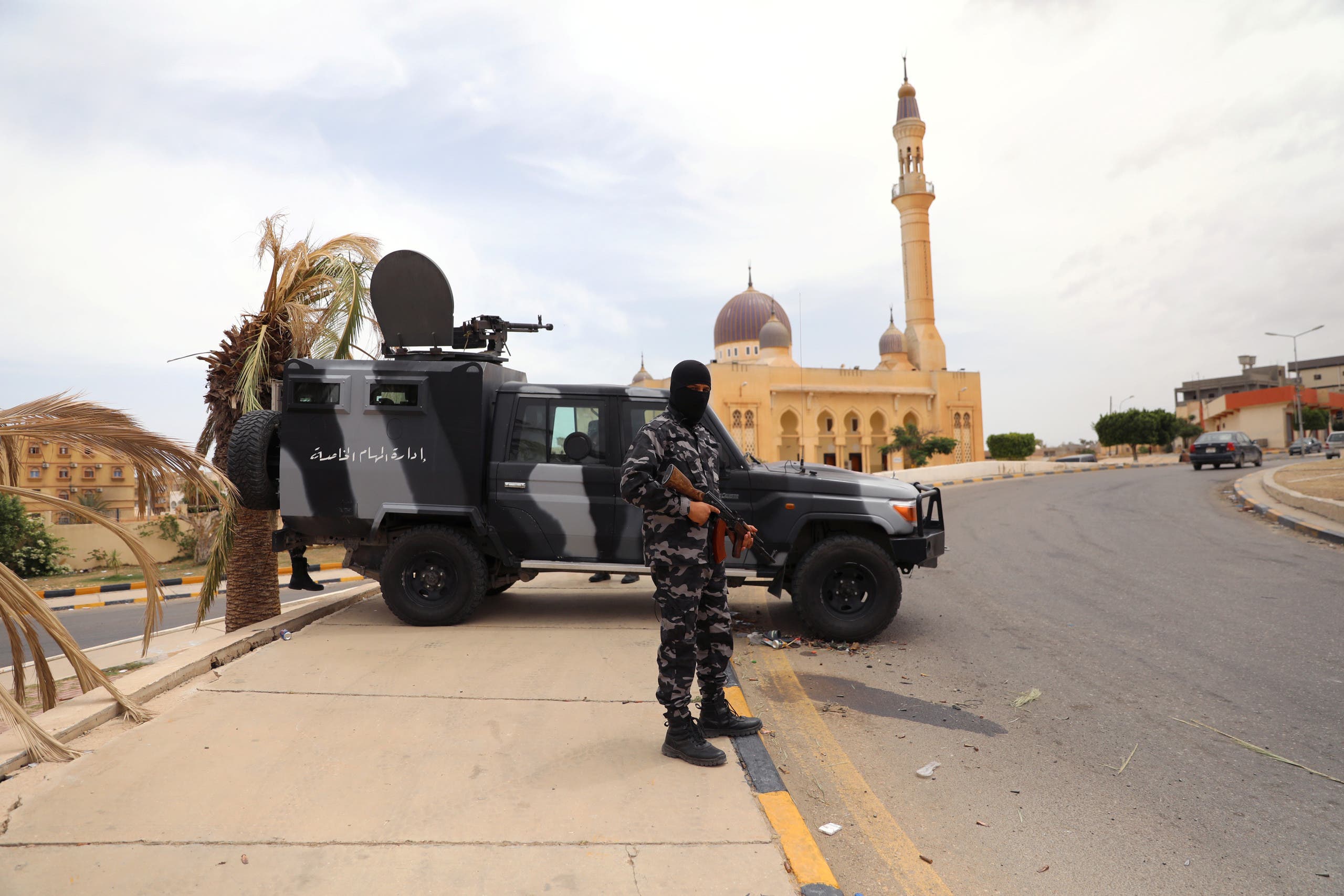 A member of security forces loyal to Libya’s GNA holds a weapon during a security deployment in Tarhouna, Libya on June 11, 2020. (Reuters)

The Libyan intervention has been “sold to the public as great successes,” Barkey said.

But in reality, Turkey has suffered losses in Libya, with the LNA reporting in February that at least 16 Turkish soldiers had been killed in the conflict. Erdogan confirmed the death of “several.”

As the conflict escalates, public opinion may go against Erdogan if Turkey becomes heavily involved, according to expert Umberto Profazio.

“In the Turkish public opinion there is a clear distinction between legitimate military operations abroad and Erdogan’s military adventurism,” said Profazio, an analyst at the NATO Foundation, in an interview with Al Arabiya English.

Turkey has primarily supported the GNA through transporting mercenaries from Syria to Libya and using a limited presence of its own military advisers on the ground to provide training and operational support, according to expert Dan Arbell, a fellow at the International Institute for Strategic Studies. 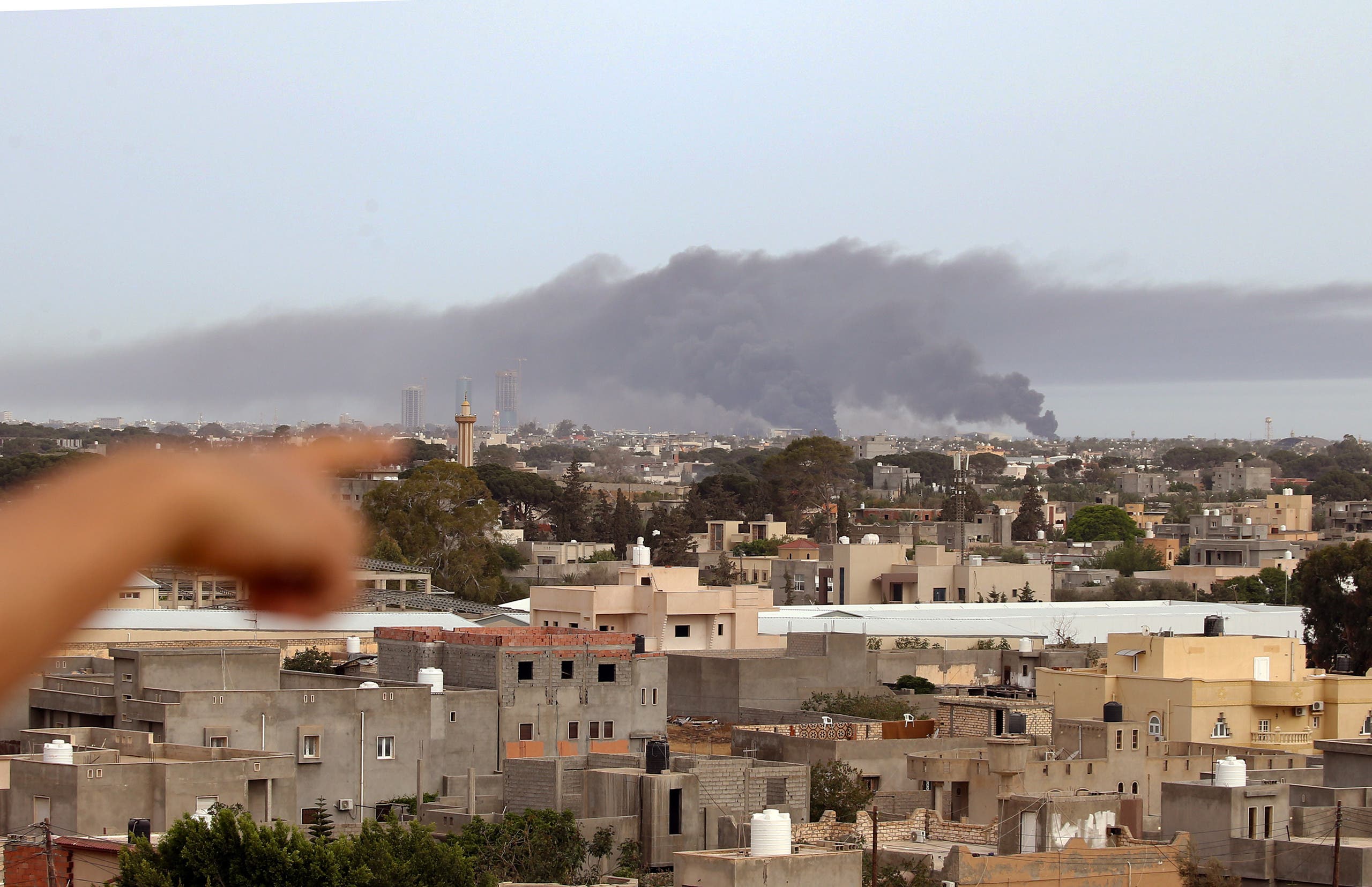 A finger points at smoke rising above buildings in the Libyan capital Tripoli, during reported shelling on May 9, 2020. (AFP)

But the risk of increasing Turkish casualties with a more direct involvement in Libya – “a remote theatre with no vital Turkish interests at stake” – will be more difficult for the public to digest, according to Profazio.

Economic interest is the main driver of Ankara’s active policy in Libya, according to Profazio. The key component is the Turkey-GNA agreement signed in November regarding the gas-rich eastern Mediterranean Sea, which drew a straight line from the northern Turkish coast down to Libya’s capital city of Tripoli.

With the agreement Turkey claims “the right to manage, regulate and dominate the distribution – if not the actual exploitation – of the vast reserves of liquid natural gas in that part of the Mediterranean,” according to Hussein Ibish, a scholar at the Arab Gulf States Institute. 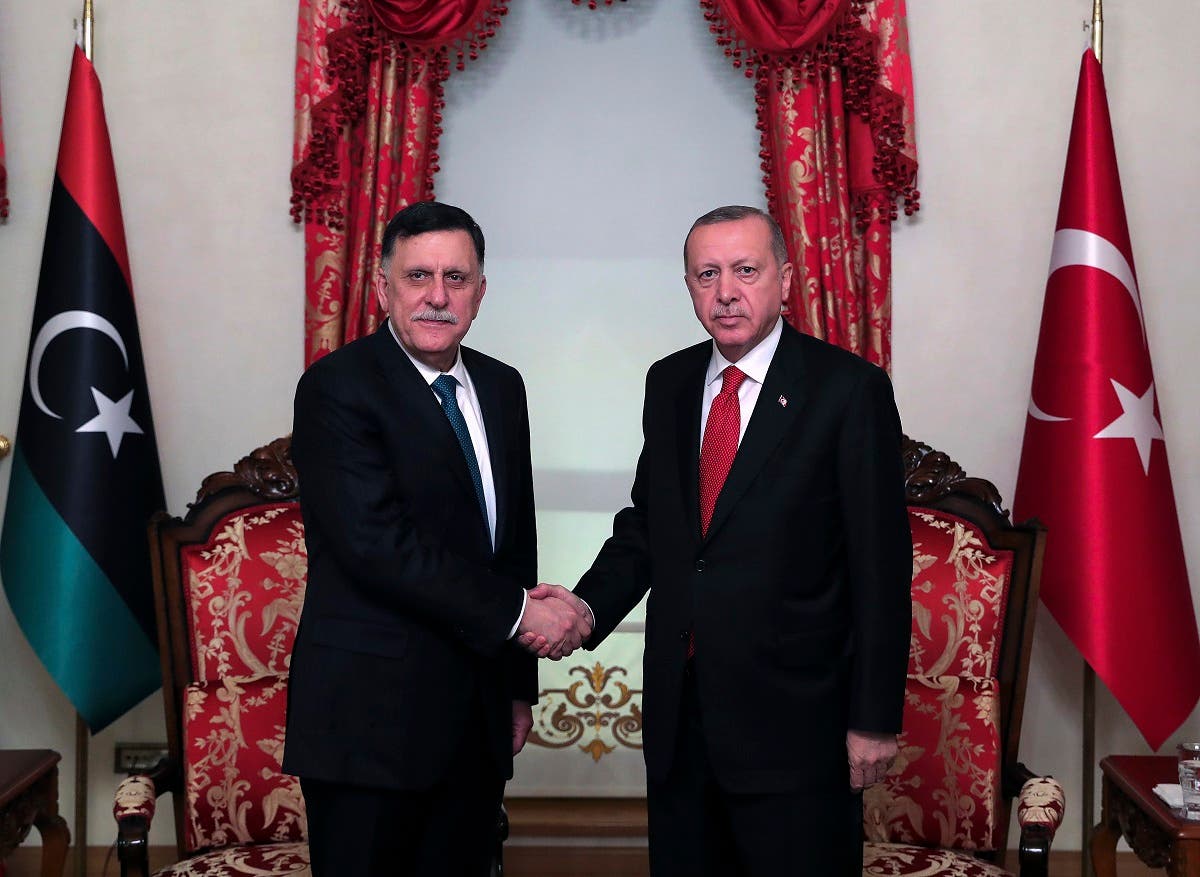 The agreement exacerbated existing disputes between Turkey and its neighbors over energy exploration in the region, including Greece, Cyprus, Israel, and others.

Turkey’s expansion in the Mediterranean has also ignited new tensions with European countries like France, and Middle Eastern countries like Egypt and the UAE, who support the rival LNA, led by General Khalifa Haftar.

The timing of the intervention in Libya “highlights the Turkish expansionist strategy,” according to UAE Minister of State for Foreign Affairs Anwar Gargash, who emphasized on Tuesday the importance of a ceasefire to counter Turkey’s actions that are threatening the national security of Arab countries. 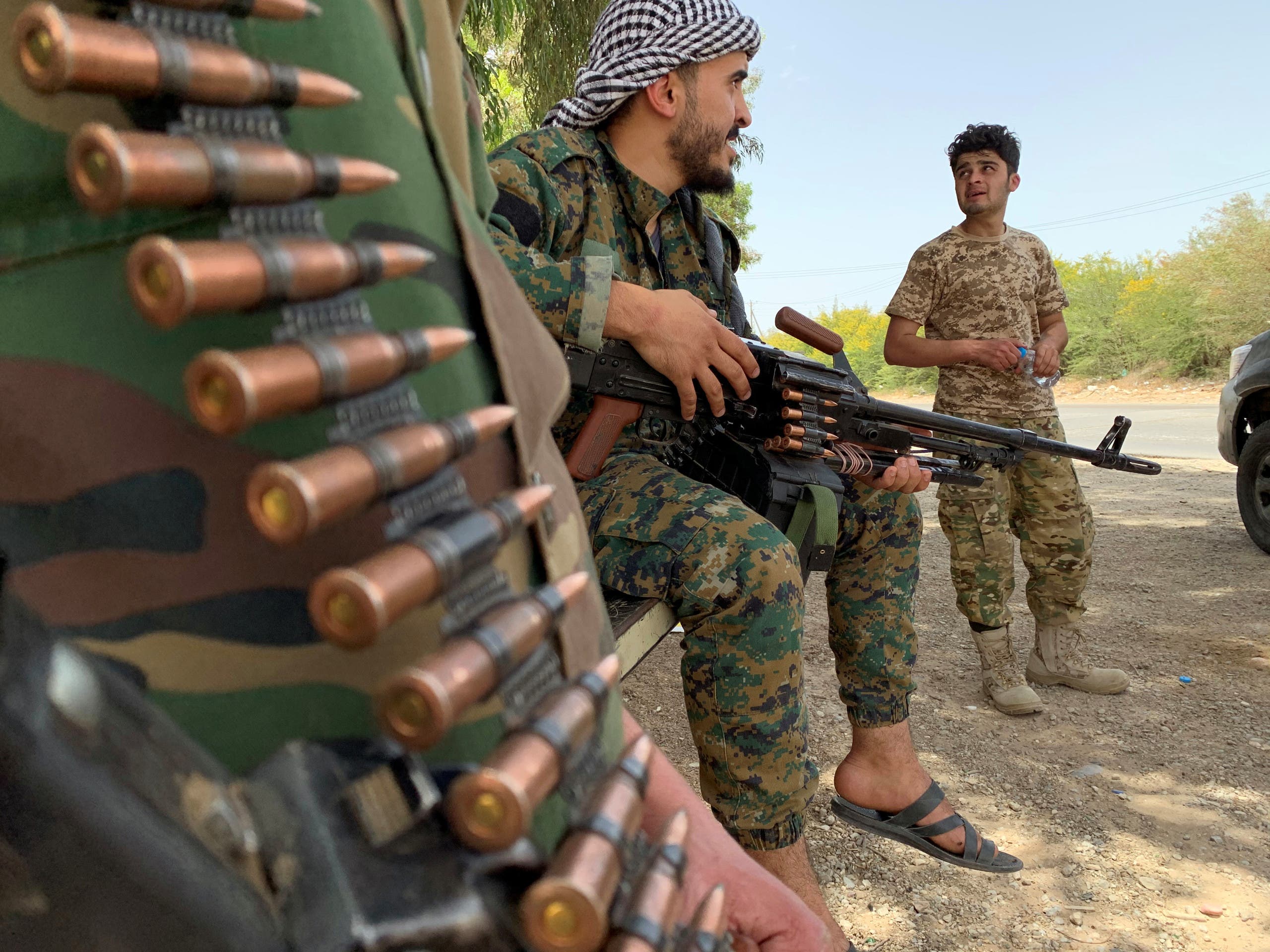 But external backlash has yet to deter Erdogan, who said earlier this month Turkey will increase its support for the GNA and that both parties will advance oil exploration in the eastern Mediterranean Sea.

“We will never leave our Libyan brothers to the mercy of mercenaries,” he said, speaking alongside GNA leader Fayez al-Sarraj in a news conference on June 4. Pakistan and India trade angry accusations at the UNGA