Elon Musk said on Twitter that he’s “almost done trimming his stake in Tesla Inc. hours after telling a satirical website that he already reached his target of reducing his stake in the electric-auto maker by 10 percent.

“I sold stock that should roughly make my total Tesla share sale roughly 10 person, the world’s richest person told Babylon Bee in an interview that also addressed his wealth, taxes and priorities. Later, on social media, he clarified that more sales are coming under a pre-programmed plan.

Musk’s earlier comments helped propel Tesla stock to its best day since Nov. 1. The shares rose 7.5 person to $1,008.87 in New York on Wednesday and the company’s value climbed back above $1 trillion.

Musk has been offloading Tesla stock since asking his Twitter followers in November whether he should sell some of his stake. It’s unclear whether the poll had any actual bearing on Musk’s plans. The chief executive officer said months earlier he was likely to exercise a big block of stock options toward the end of the year, and he set up a trading plan to sell shares before his tweet.

Late Sunday, he said in a Tweet that he would pay more than $11 billion in taxes this year, hitting back at criticism from a number of lawmakers like Senator Elizabeth Warren who called Musk a “freeloader on social media. Warren and other leading Democrats claim billionaires like Musk are avoiding paying taxes.

“I don’t have any offshore accounts, I don’t have any tax shelters, Musk said, adding that he could do his taxes himself in just a few hours. “Everything is extremely transparent.

The latest regulatory filings show Musk sold $325.7 million in one batch and $528 million in another, taking the total to 13.8 million shares for about $14.5 billion. He’ll need to dispose of about 17 million shares to offload 10 percent of his stake, assuming his pledge excludes exercisable options.

Tesla has declined by about a quarter since a peak on Nov. 4, just prior to Musk’s Twitter poll, to which the majority of respondents answered “yes.

Musk, 50, is the world’s richest person, atop the Bloomberg Billionaires Index with a fortune of $260.9 billion.

“I’m not sure it’s all that productive or interesting to focus on wealth, Musk told Babylon Bee. “Essentially all of my net worth is just in SpaceX and Tesla stock, these two companies I helped create and have run now almost 20 years that have done a lot of useful things. 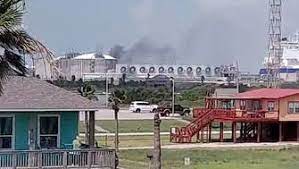 Europe’s gas terminals ‘running at full capacity’ with LNG exports from US: Expert