Ellen Pompeo is facing backlash after past remarks about Harvey Weinstein and sexual assault survivors have resurfaced online.

On Wednesday, the clip in question comes from an Oxford Union Q&A with the Grey’s Anatomy star from July 2018.

During the interview, the actress talks about everything from topic her time on the ABC show, pay inequality in Hollywood and the way women are treated in the industry as well. But it’s her comments she made about the film producer and convicted sex offender as well sexual assault survivors that are raising eyebrows.

In the specific one-minute clip that has been making rounds on Twitter this afternoon, Pompeo says, “I think we bear some responsibility, not all, but it takes two to tango for sure. That’s not to blame the victim, that’s just to say… I did go into a room with Harvey Weinstein, I sat at a table with him, I had a probably two and a half hour with him. He never said anything inappropriate to me, he never made any sort of physical advance to me.”

She added, “I wasn’t in the room alone with him. I had been sent there by an agent in the middle of the daytime. I didn’t think there was anything wrong. I wouldn’t have gone into that room at night. But he did nothing inappropriate toward me. Now had he, I would have picked up that glass and smashed him across the side of the face with it. So I mean, it’s all what we’re willing to tolerate in our self-esteem, and what are we going to put up with, and what are we going to compromise to be liked, to be loved, to be accepted? How bad do we want to be in show business?”

Before making the aforementioned comments in the Q&A, the interviewer had asked Pompeo about the importance of having the courage to speak up for oneself in the workplace and about the role the #MeToo and #TimesUp movements have played in this.

As well as the role these two movements have played in calling out sexual harassment and abuse in the workplace and in the Hollywood industry.

She went on to talk about not “making excuses for these pigs” that do “disgusting things to women,” adding that these “learned behaviors” from men in the Hollywood industry have been learned from other generations of men who “got away with it.”

Ellen Pompeo Wanted to Quit “Grey’s Anatomy” Many Times
Further, Pompeo said that she also believes women have to be “responsible for the signals that we put out, for the messages that we put and the way we present ourselves.”

She explained, “I said in my article and I’m not ashamed to say it, as an actor, you certainly, certainly, go into the room with the idea that this director needs to fall in love with me to give me this part. And so, as women, we flirt.”

One user on social media shared the short clip and wrote, “what the fvck is wrong with ellen pompeo… this is absolutely DISGUSTING.”

Another user on social media added in response, “that’s so disgusting. as a sexual assault survivor i am absolutely appalled. ‘it takes two to tango’ […] no and it will never be my fault.”

The Grey’s Anatomy actress has not addressed the comments yet. 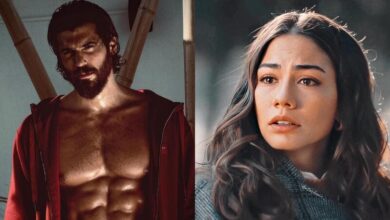