An Egyptian student’s name ‘Haneen Hussam’ has gone viral on Twitter and Google, with 200k+ searches.

Haneen sparked controversy in Egypt after she shared a controversial video on TikTok, prompting the Cairo University of Egypt into an investigation and the possibility of dismissing her after the huge campaign against her on social media for acting ‘contrary to public morals.’ 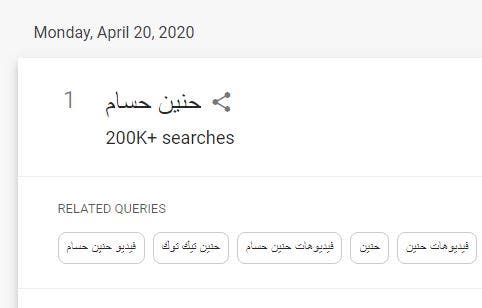 The beginning was when a video circulated on social media of Haneen Hussam calling on girls who are over 18 years old to talk to “the opposite sex” in exchange for a sum up to three thousand dollars, through a new application called “Likey”.

That call caused a state of controversy on social media, and a hashtag was launched in her name to demand arresting her, and the first of them was the Egyptian journalist Nashaat Al-Daihi, who presented the video and commented on it calling for prostitution, as per his claims.

Haneen Hussam did not stay silent and responded to the accusations, saying that her father and mother agreed to all of her videos, explaining that her video is very respectable, but the media persecuted her.

Hussam added, in a televised intervention, that the video that some people exploited to offend her was 3 minutes, but it was shortened to 10 seconds to make her look bad.

She stated that she needed “20 respectable girls” for the new Likey application, but some misunderstood her.

Helicopters to Attend Wael Kfoury’s Concert in Jordan.. How Much Is the Ticket?