An Egyptian researcher and activist has been arrested at Cairo’s international airport upon his arrival from Italy, in a move that raised alarm and prompted condemnation by human rights groups.

Patrick George Zaki, 27, had been in Bologna since August 2019 for his postgraduate studies and returned to Egypt’s capital for a brief family visit on Friday, according to the Egyptian Initiative for Personal Rights (EIPR).

It said Zaki, who works as a gender and human rights researcher for the group, was taken into custody at the airport and disappeared for 24 hours.

Zaki’s lawyers said he was beaten, subjected to electric shocks, threatened and questioned about his work and activism before he appeared at a public prosecutor’s office in his hometown, the Nile Delta city of Mansoura, on Saturday, according to EIPR.

Prosecutors ordered that he remain in custody for 15 days pending investigations into a host of allegations, including publishing false news, inciting protests without permission and calling for the overthrow of the state.

Other allegations included managing a social media account that aims to undermine the social order and public safety, and incitement to commit violence and terrorist crimes, EIPR said.

“EIPR demands the immediate release of Patrick George Zaki and an end to continued harassment and arbitrary detention of human rights professionals, members of civil society groups and journalists,” the group said in a statement published on its website.

The Ministry of Interior, which oversees Egypt’s police, said in a brief statement on Sunday that Zaki was being held on a warrant from the prosecution, who ordered him to remain in detention pending an investigation.

Thousands arrested
Rights activists say President Abdel Fattah el-Sisi has overseen an unprecedented crackdown on freedoms in Egypt since first taking power in 2013 and then winning elections in 2014. El-Sisi and his backers say the measures are needed to keep Egypt stable and counter threats from armed groups.

Thousands of people have been arrested – both secular-leaning activists and members of the Muslim Brotherhood – all while rolling back freedoms won after the uprising in 2011 that became known as the Arab Spring.

Commenting on Zaki’s arrest, a spokesman for Amnesty International Italy told Al Jazeera: “The fact that they started with 15 days of pre-trial detention makes us worried about how long this is going to last.”

Riccardo Noury added: “It could go on for months to then get to an unfair trial with a heavy sentence,” he added.

Zaki’s arrest has stoked fears of a repeat of the case of the murder of Giulio Regeni, a 28-year-old PhD student who was disappeared killed in Cairo in January 2016.

Despite months of cooperation between Egyptian and Italian prosecutors, no one has been arrested or charged over the killing. Italy is pressing Egypt to speed up the investigation.

Regeni’s body was found, several days after he was killed, bearing signs of extensive torture which activists and rights groups say is common in Egyptian detention facilities.

Egyptian authorities have denied involvement in his death and initially suggested Regeni died in a traffic accident. They later said he was killed by a criminal gang that was subsequently wiped out in a shoot-out with police.

“How do you still consider Egypt a safe country?” Erasmo Palazzotto, president of the parliamentary inquiry into the death of Regeni, said in a Twitter post.

“The Italian government cannot keep acting like nothing happened in its relationship to a country that continues to violate human rights in this way,” he added. In 2022, India came for Kashmir’s land, votes and journalists 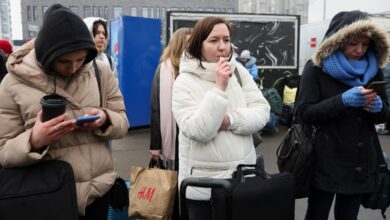 Turkey tells US it wants ‘concrete steps’ from Finland, Sweden for NATO bids