Nick Rhodes, founding member, and keyboardist of the band Duran Duran confirmed that the King of Pop Michael Jackson once reached out with an offer to work together.

“I get home and the phone rings, and my mum says, ‘Oh, there’s somebody on the phone for you. He says his name’s Michael Jackson,'” Rhodes said.

Rhodes went on to say that he initially thought the call was a prank by a member of Duran Duran’s crew.

Rhodes said he eventually realized it really was Jackson on the phone.

He approached his bandmates the next day but no one was interested in making a song.

“He was keen to make a record, and I go to everyone the next day … and say, ‘Hey, Michael Jackson called last night. Do you fancy maybe doing a song?’ They all went, ‘Nah,'” Rhodes said.

Rhodes and his bandmates Simon Le Bon, John Taylor and Roger Taylor also answered a round of scattergun questions.

Among them, “Rio” is drummer Roger’s favorite song to rock out to. And would DD care to be the subject of a biopic, something along the lines of Rocketman or Bohemian Rhapsody?

“Well, it’s very flattering idea isn’t it,” Le Bon explained. “I think every band would like to have a biopic made out of them.” He then casually pitched the idea of Brad Pitt playing the frontman.

The members of Duran Duran also shared the best advice they received from a fellow musician.

“Stick together,” Rhodes said. “Well, it was from Mick Jagger, so I had no choice.”

Rhodes said Jagger gave them the advice after Duran Duran had “already lasted longer than the Sex Pistols and almost as long as the Beatles.”

Meanwhile, Duran Duran are set to release their first new album in six years on October 22, ‘Future Past’. 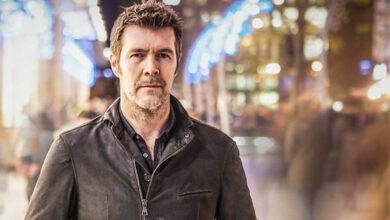 Zain Karazon Chokes up on Snapchat.. and Sends Out an Indirect Message To Ex Fiancé Abdullah Kanaan