American TV psychologist Dr. Phil asked why the economy continues to function as people die from cigarettes, car crashes, and swimming pool drownings, but has shut down for coronavirus.

“We don’t shut the country down for that, but yet we’re doing it for this and the fallout will last for years, because people’s lives are being destroyed,” Dr. Phil said during an appearance on Laura Ingraham’s Fox News program.

Phil McGraw, better known as Dr. Phil, did not acknowledge that none of the causes of death on his list – which he gave inaccurate statistics for – are contagious. 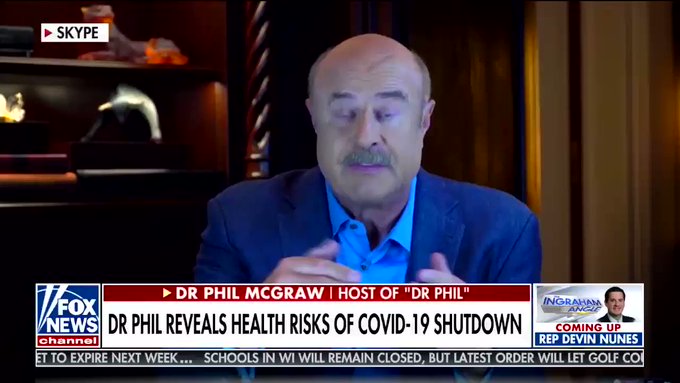 19.8K people are talking about this

Fauci appeared alongside Dr. Phil on the Fox News program to explain the new government guidelines.

Earlier in the week, US President Donald Trump claimed he had total authority to order states to reopen, but later walked back his comments after critics noted that this claim did not have grounding in the US Constitution.

Later in the week, Trump changed his tune.

“You’re going to call your own shots,” Trump told the governors Thursday afternoon in a conference call, according to an audio recording obtained by The Associated Press. “We’re going to be standing alongside of you.”

Despite warnings from medical experts, like Fauci, who have said some level of social distancing guidelines may need to remain in place until a vaccine is developed, there are those who remain adamant that the economy should reopen as quickly as possible.

“It is not going to be a light switch that we say, OK, it is now June, July or whatever, click, the light switch goes back on,” Fauci has said. “It’s going to be depending where you are in the country.”

Around the US, right-wing Americans having grown discontent with lockdowns, have begun to protest.

“It enrages something inside of you,” said one American woman in Ohio, AP reported.

The protest in Ohio was one among many held in other states including Oklahoma, Texas, and Virginia.

“As patriots, we put President Trump in office for a reason,” the protester in Ohio said. “If he’s not able to give a convincing enough argument to these governors that they need to open up, then he needs to do something to take action.”