Ports operator DP World gave an optimistic outlook for 2021 on Thursday, citing pent-up demand for cargo and an easing of geopolitical tensions after the change of US administration.

Sultan Ahmed bin Sulayem, who is chairman and chief executive of the Dubai state-owned global ports operator, said that demand and supply chain capabilities had also improved as a result of the coronavirus pandemic.

“You are always cautious … (but) the outlook this year looks good for many reasons,” he said on a call with reporters after DP World reported a 29 percent fall in profit for 2020 compared with 2019, when it was inflated by a land sale.

Bin Sulayem had cautioned during Donald Trump’s time as president that trade tensions between the United States and other countries made for a challenging environment.

He said US President Joe Biden’s administration was handling trade consultations in a “better way.”

Bin Sulayem said a shortage of shipping containers as a result of strong demand, in part driven by the need to transport goods associated with the pandemic, was still there but easing.

DP World, one of the world’s largest port operators, said it plans $1.2 billion in capital expenditure this year after posting an 11 percent rise in revenue to $8.5 billion for 2020.

However, attributable profit after separately disclosed items fell to $846million from $1.19 billion. DP World said this drop would have been 6 percent excluding a 2019 land sale.

Bin Sulayem said earlier in a statement that DP World had performed better than expected “in a year like no other.”

He also said DP World was looking at other potential investment opportunities in Israel, including ports in Eilat and Ashdod, and logistics parks elsewhere, as it awaits a decision on its joint venture bid for Haifa Port.

“Israel is a good and a very strategic bridge between Europe and many parts of the business that we have,” he told reporters. 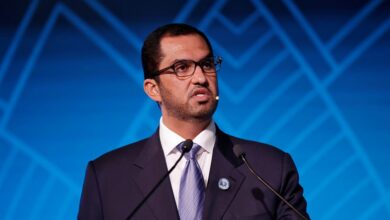 UAE: ’Critical’ for investment to flow to lowest-cost, lowest-carbon energy