At least 30 soldiers have been killed and 60 wounded in Houthi attacks on a military base belonging to forces of the Saudi-led coalition, a spokesman for Yemen’s southern forces said.

Sunday’s attack on the al-Anad military base in the government-held southern province of Lahij was carried out using armed drones and ballistic missiles, said Mohamed al-Naqeeb, the spokesman.

A ballistic missile landed in the base’s training area, where dozens of soldiers were doing morning exercises, officials said.

Al-Naqeeb said the death toll may rise as rescuers are still scouring the scene.

Medics described a chaotic situation at the base following the explosions, with soldiers carrying their wounded colleagues to safety fearing another attack.

Residents nearby said several loud blasts were heard in the area. Other residents from the disputed central city of Taiz said they heard ballistic missiles fired from launchers positioned in the Houthi-held eastern suburbs of the city.

There was no immediate comment from the rebel side.

The internationally recognised government – backed by a Saudi-led military coalition – and the Iran-allied Houthis have been locked in war since 2014 when the rebels seized the capital, Sanaa.

A coalition led by Saudi Arabia and the United Arab Emirates intervened in March 2015 to restore the government of Abd-Rabbu Mansour Hadi to power but the ensuing conflict, now stalemated, has killed tens of thousands and caused the world’s worst humanitarian crisis.

In 2019, the Houthis said they had launched a drone attack on al-Anad during a military parade, with medics and government sources saying at the time at least six loyalists were killed – including a high-ranking intelligence official.

Al-Anad, 60km (40 miles) north of Yemen’s second city Aden, was the headquarters for US troops overseeing a long-running drone war against al-Qaeda until March 2014 when it was overrun by the Houthi rebels. ‘How many more must die?’ Nigeria church attack anger seethes 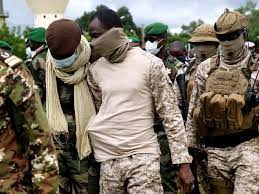