The artist behind an international art project to produce a gown featuring work from 202 artisans from 28 countries has shared some of the inside stories from the decade-long project.

British artist Kirstie Macleod’s “The Red Dress” stitched together stories and cultures from artists from 28 countries onto a single ruby silk gown.

Starting at Art Dubai 2009 as a single jacket, the dress has grown to include bright patterns and designs layered over each other from a range of artisans, financed by seed investment from the British Council.

With the final showcase delayed by the coronavirus pandemic, Macleod has now revealed some of the stories behind the dress, including a trip to Egypt’s Sinai desert and the influence of Saudi Arabian Bedouin dresses on the project. 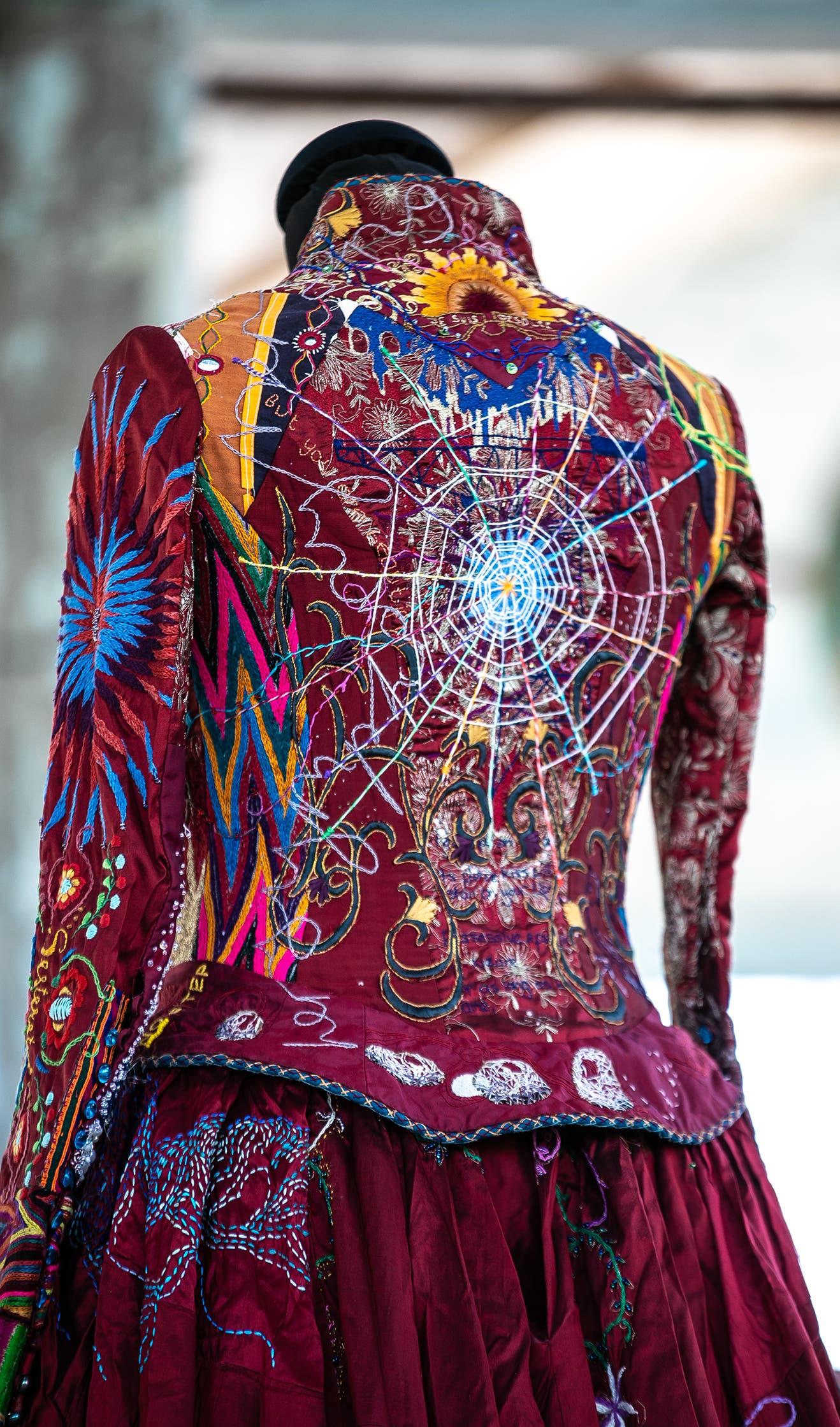 The back of the bodice in the final stage of the dress. (Supplied: Kiyah Cross)

“I spent my childhood living in loads of different countries, from Japan to Nigeria and Barbados, extremely different and contrasting cultures,” Macleod told Al Arabiya English. “I became very used to and interested in color, texture and language.”

“My own experience of being one person but having all these ideas and experiences from so many different countries, I think at the very heart of the project was me trying to make sense of my own identity,” she added. “I wondered what it would be like to have a single piece that would travel and be made by people from all over the world, all these identities from these contrasting cultures.”

Neat cross-stitch by Palestinian refugees in Lebanon and ornately beaded lotus flowers from Indian craftsmen sit alongside a brightly-hued toucan from Colombia, and blue and yellow spirals created by victims of Rwanda’s civil war.

With embroidery being a long-standing and diverse tradition in the Middle East, the dress displays many markers of Arab heritage.

“I started researching the textile heritage of the UAE and was very interested to read about the silk trade,” Macleod said, “and found there was a particular emphasis on red silk being special and prized, which informed the color of the dress.” 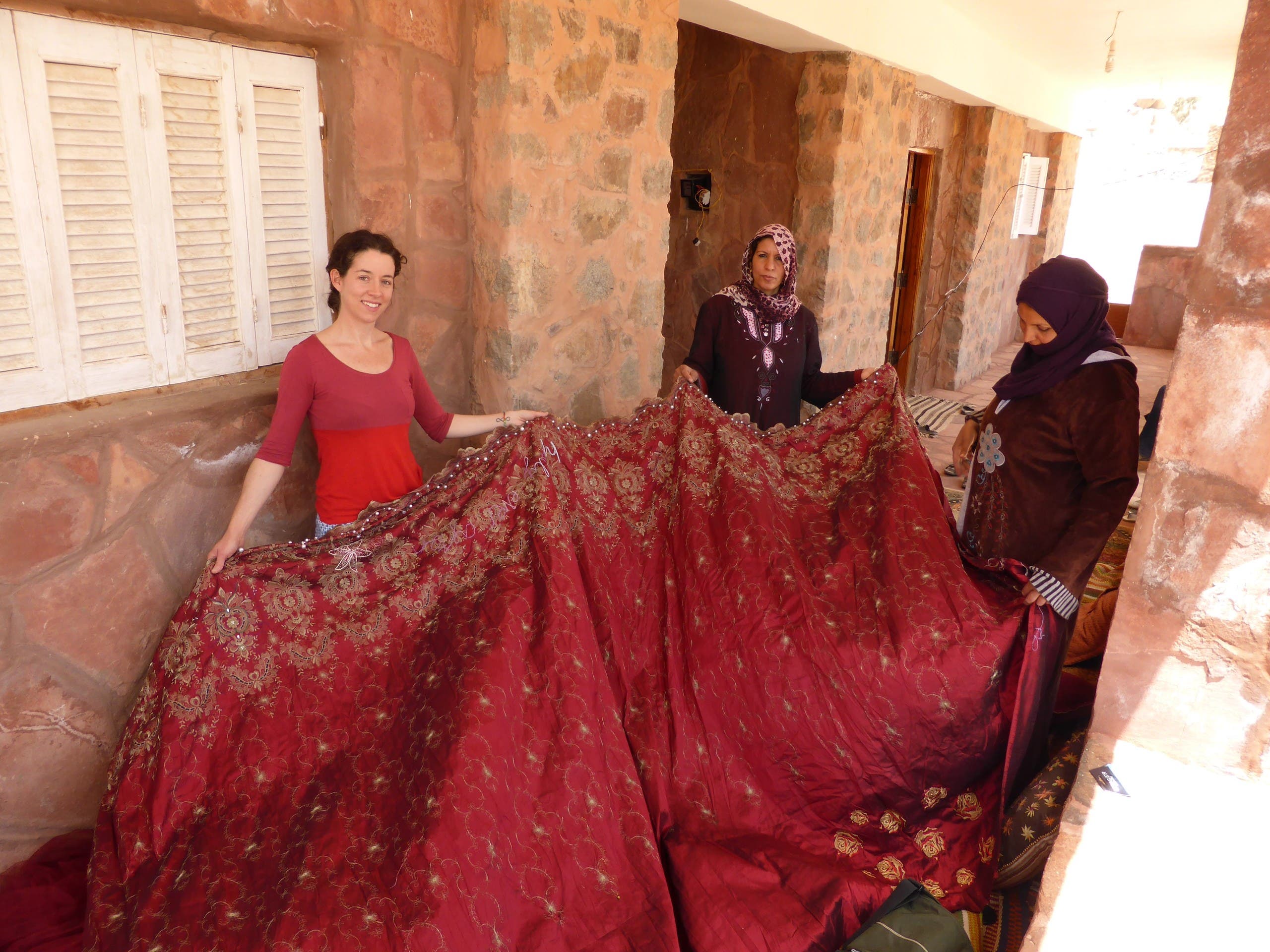 As it was a largely self-funded project, Macleod could only travel with the dress to meet the artists occasionally. Often, the commissioned work would be done on a patch of the fabric, to be later mailed back and stitched into the ever-expanding dress.

One such example is a pair of panels created by Maysaa Alireza, from the Saudi Arabian textile boutique Almaysaa, showing metallic floral beading and golden threadwork. Commissioned through an embroidery enthusiast who had heard about the project, Macleod only found out about where the artisan was based after the work was done.

Alireza began working in tailoring after having children and looking for work that kept her closer to home, creating from her basement while also caring for her children.

“As a working woman, I wanted to do easy-going skirts for working ladies, and this is how tailoring was introduced to my life. Ever since, I am committed to tailoring, designing, and embroidery,” Alireza wrote. “The pieces I designed for The Red Dress are inspired by the Saudi Bedouin embroidered dresses, that are usually worn as pre-wedding dresses called ‘Ghumra’ (a henna night)…resembling what a traditional lady wears in Saudi Arabia, with its rich textiles.”

With fast fashion and mechanical embroidery inundating the market, a large part of the project is about the women who continue to practice this dwindling craft using traditional techniques.

Often done by local communities from poorer backgrounds, Macleod had tried to work with initiatives that support the women and provide them with the means to earn a reasonable wage and further their independence. Relating their stories and the personality behind the colorful stitching is an important part of the project for her. 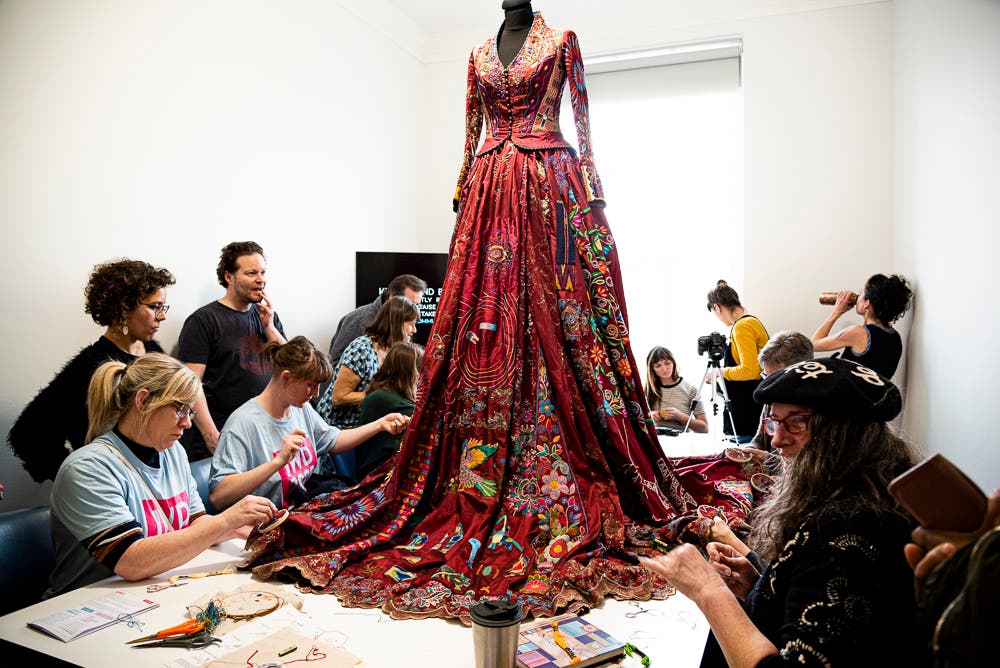 A group of women add small embroidery pieces to the hem at a pop-up exhibition in Bristol, UK, on International Women’s Day. (Supplied: Mireya Gonzales)

The time Macleod was able to travel to Saint Catherine in Egypt’s Sinai mountains to have new work added to the dress is a fond memory of hers. The commission was the largest for the dress and employed 20 women from FanSina embroidery group for a month.

“The lady who runs it, Selema Gabaly, lives with her family who worked on the dress and other artisans she works with,” Macleod said. “Salema has married a non-Bedouin Egyptian man and it’s caused her a lot of problems within her community.

“She’s very successful with what she’s doing, allowing these women to earn an income, send their children to school and feel empowered,” she added, “and the success of her business, alongside her marriage, has led to having her business sabotaged, her car stolen, but she just keeps going and is so inspirational because she won’t give up.”

The work done at FanSina includes four large turquoise and red sun-burst shapes seen on the gown, inspired by the flowers found on the mountainside. The women also worked on top of a fine base layer of ornate floral embroidery done in Paris, filling in the iconic fleur-de-lys pattern with pops of color and adding beaded embellishments.

The dress has changed over the years, originally having a much higher Elizabethan collar to fit with Art Dubai’s more conservative audience, a more voluminous skirt, and was displayed as an installation piece where Macleod would don the dress and sit in a large Perspex cube. The final dress now has a lower neckline and a dress with fewer folds to showcase as much of the embroidery as possible, displayed on a mannequin or worn. 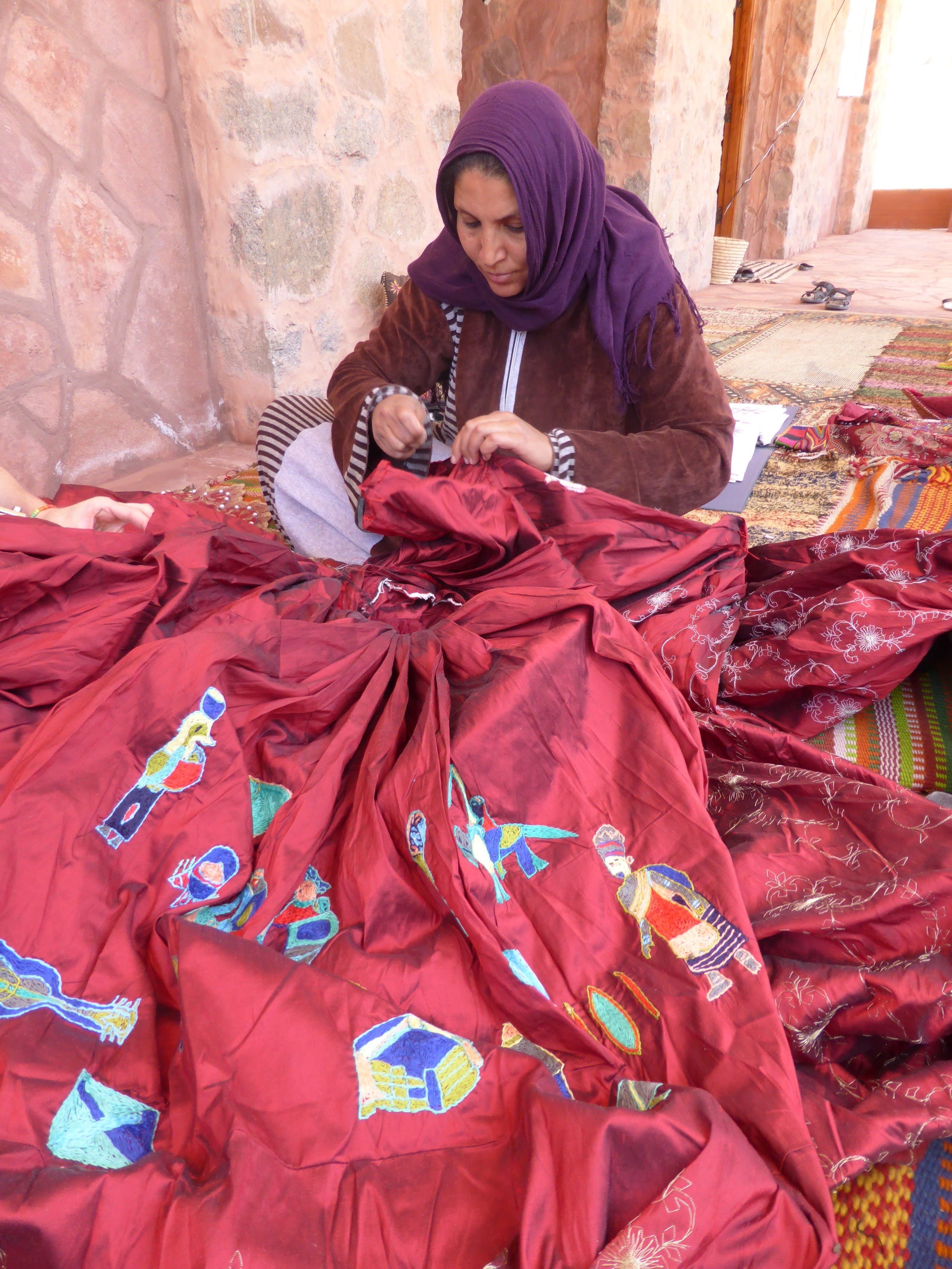 The future of the dress

Macleod completed the dress in 2019 with the intention of showcasing it at Mexico’s Museo de Arte Popular in March, whilst visiting some of the artisans who had worked on the gown. The coronavirus pandemic forced her to cancel plans and make a long journey back to the UK, then spent time recovering from the virus herself.

Now, Macleod is ready to work on the project’s final stage again, looking for funding to complete a documentary on the dress for early 2021, created by Black Bark Films, who have been filming for about a year, compiling the women’s stories and details of the dress’ creation.

Over the years, the dress has had a few pop-up exhibitions, some of which invited visitors to add a small detail to the dress, but Macleod hopes to do something on a larger scale for the finale.

Macleod said she has received interest from the US, France and Africa for exhibitions, and hopes to one day return to Art Dubai to complete the cycle.

“I’m hoping the next five years will be a process of touring the dress in different countries around the world, and the week before maybe work with some local artisans to add a little commission to the dress as part of it, [before] eventually coming to rest at a museum, maybe something like the Victoria and Albert Museum,” she said.

“I’m just trying to figure it all out now. I trust that it’s all unfolding as it should do, the dress is like her own person now and I think she knows what she’s doing and I just need to figure out how I can support her.”

Tattoo ‘Do it Yourself’ Gets Popular During Lockdown

Up The Hill Mockery! Gucci, North Face Models Climb in Heels and Mini-Skirts

The Futuristic Look: French Designer Pierre Cardin Dies at The Age of 98

How To Gradient Lips

What Can Women’s Heels Tell Us About the Recovery of the Global Economy?