Fans were left wondering if she was sending a message about posted a voting selfie while wearing a red top.

But Kim Kardashian did not want to give any indication what side of the political spectrum she was leaning on.

The 40-year-old reality star deleted her original ‘I voted” selfie with the red top and reposted it with a black and white filter instead during election night on Tuesday.

As red is the color is associated with the Republican Party, followers did not forget the original post, however, as many criticized her over the version she had posted earlier in the day.

One shared the first image with the caption: ‘The original picture ….. with the RED confidently showing.’

Another blasted the star over being tonedeaf as they wrote: ‘The fact that you posted the same pic with color earlier and your top is the color red giving your followers the hint that you are in fact voting red is just such a let a down and to be quite honest it’s irresponsible knowing the climate that we are in rn [middle finger emoji]’

Earlier in the day the social media savant wore a bright red mesh top to show off a patriotic ‘I voted’ sticker while husband Kanye West cast his ballot for the first time in his life and voted for himself.

Kim showed off her perfect pout while holding up the red, white and blue sticker close to her face.

Fans were quick to note her choice of wearing red for the photo op, a color largely used by Trump supporters and the conservative or Republican vote.

‘I VOTED!!!! Did u???’ she captioned the snap to her nearly 200 million followers hours after her husband stopped by the polls.

Kim has created quite the partnership with Donald Trump in the last year as she advocated for prison reform at the White House.

While she made no mention of who she voted for, she gave a like to Kid Cudi after he boasted about voting for Joe Biden in the presidential election.

She also lent her support to a Kamala Harris tweet where the Senator pleaded with voters to stay in line and report any form of intimidation.

‘Don’t allow anything to come between you and your vote,’ Harris wrote. ‘If you have any questions or concerns about voting, reach out to our voter hotline. 1.833.336.8663.’

Kanye shared photos from his election day adventure while voting in a bright blue hoodie and black sweat pants.

He made sure to show his Twitter followers his ballot, with his name written in along with Michelle Tidball.

‘God is so good,’ he wrote on Twitter this morning. ‘Today I am voting for the first time in my life for the President of the United States, and it’s for someone I truly trust…me.’

Kanye’s seen a steady decline of Twitter followers in the last two weeks having lost more than 26,000 individual users.

While he promoted himself as a presidential candidate, he made only a few national ballots under a vice presidential ticket. Fares Karam : Myriam Fares Gets on my Nerves 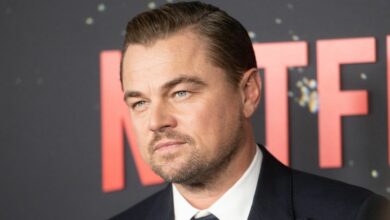 Bolsonaro hits out at DiCaprio after election plea