Gigi Hadid is asking for ‘privacy’ amid rumors she’s split with Zayn Malik after an alleged altercation between him and Hadid’s mother Yolanda.

The model, 26, released a statement via her reps on Thursday, telling E! News: ‘Gigi is solely focused on the best for Khai. She asks for privacy during this time.’

This comes after People magazine reported: ‘They are not together right now. They are both good parents though.’

Zayn and Gigi, who have dated on/off since 2015, welcomed their only child in September 2020. Hadid had confirmed her pregnancy in the spring of that year.

‘They co-parent. Yolanda is of course very protective of Gigi. She wants the best for her daughter and grandchild.’

Malik seemingly hinted about his and Gigi’s split when he took to Twitter on Thursday to address the serious claims made against him by Yolanda.

In his statement, Zayn said that the ‘private matter’ being made public has jeopardized the ‘safe space’ in which he and the 26-year-old model ‘co-parent’ their infant – seemingly suggesting they are no longer together.

According to TMZ, Yolanda alleges she was ‘struck’ by Zayn during an altercation that occurred ‘some point last week,’ whereas Zayn claims the incident involved nothing more than an exchange of ‘harsh words’ and had taken place ‘several weeks ago’ at Gigi’s home.

The outlet also said that Yolanda is considering filing a police report. As of Thursday, October 28, no police reports were seen on file.

No further details have been provided in regards to what may have triggered the alleged scuffle between the two.

Appearing to not take sides, a representative for Gigi told E! News that the runway star ‘is solely focused on the best for Khai’ and that ‘she asks for privacy during this time.’

Malik refrained from naming Yolanda in his lengthy Twitter post and, instead, referred to her as ‘a family member of my partner’s’ as he expressed concern for how the public allegations may affect Khai and her environment going forward.

He would later go on to directly address the allegations in a statement to TMZ.

‘I adamantly deny striking Yolanda Hadid and for the sake of my daughter I decline to give any further details and I hope that Yolanda will reconsider her false allegations and move towards healing these family issues in private,’ the statement read.

In his lengthy Twitter post, Zayn described himself as a ‘private person’ and expressed obvious dismay over ‘private family matters’ being ‘thrown on the world stage.’

He wrote: ‘As you all know I am a private person and I very much want to create a safe and private safe for my daughter to grow up in. A place where private family matters aren’t thrown on the world stage for all to poke and pick apart.

‘In an effort to protect that space for her I agreed to not contest claims arising from an argument I had with a family member of my partner’s who entered our home while my partner was away several weeks ago.

‘This was and still should be a private matter but it seems for now there is divisiveness and despite my efforts to restore us to a peaceful family environment that will allow for me to co-parent my daughter in a manner in which she deserves, this has been ‘leaked’ to the press.

He added: ‘I am hopeful though for healing for all involved with the harsh words shared and more importantly I remain vigilant to protect Khai and give her the privacy she needs.’

Zayn had purchased a house in bucolic Pennsylvania not far from where Yolanda resides where he and Gigi raise Khai half of the time.

The British born singer has had a string of violent outbursts in the past, but none involving Hadid family members until this alleged incident.

In June, he got into a shirtless confrontation outside of a bar in the East Village neighborhood of New York City.

A rowdy bar patron tried to pick a fight with him and hurled profanity at Zayn as he smoked a cigarette outside near the Amsterdam Billiards Club.

‘Who the f**k said anything to you?’ Zayn fired back as the man lunged at him, but the confrontation reportedly never turned physical, and police were not involved. 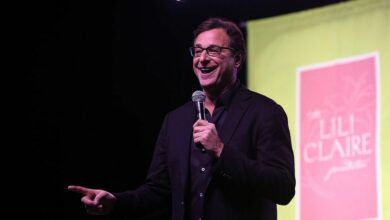 Una Stubbs: Till Death Us Do Part and Sherlock actress dies aged 84

Michael B. Jordan is The Sexiest Man Alive According to ‘People’