The German public broadcaster is under fire over allegations of racist attitudes and bullying by staff members.

A lack of cultural sensitivity, bias against female gender, bullying and sexual misconduct, you name it, the German public broadcaster Deutsche Welle (DW) has been facing all those charges by its former employees, raising serious questions about the ethical standing of the organisation.

The Guardian, a London-based newspaper, reported last week that DW has turned a blind eye to serious complaints ranging from sexual harassment to racism, antisemitism and severe bullying, accusing the management of ignorance or a tendency to silence them.

DW is financed by German federal tax resources and employs 1,500 full employees and nearly as many freelancers from 60 countries at its headquarters in Bonn and main studio in Berli,n providing services in 30 languages including English, German, Spanish, and Arabic.

TRT World tried to reach out to DW staff or former employees to discuss the accusations but many were too scared to talk. However one ex-staffer shared their experiences at DW during the time he worked there on the condition that they remain anonymous.

“I agree with all the allegations made in the Guardian report, it is absolutely true that there is a deep-rooted culture of harassment, bullying, racism, xenophobia, and sexism at DW,” they told TRT World. They also objected to management’s attitude towards complainants in which they said “many of these employees are pressured and forced to retract their statements”.

“Not long ago, a senior presenter was alleged to continuously use abusive language, and openly sexist remarks at the workplace. DW tried every trick to keep that presenter in the job, while ignoring several complaints from other employees,” the former staffer alleged.

They said they personally knew stories of two female colleagues who suffered sexual harassment from managers at DW. One of them had to briefly leave DW to avoid constant unwanted attention from her manager.

“Freelance employees live in constant fear,” the former employee explained, saying they worried about losing those precious few shifts, while longstanding employees also fear losing their jobs if they speak out.

The former staffer went on to explain a few examples to describe the working environment in DW. “While a news report about rescuing refugees and asylum seekers from the Mediterranean Sea was playing – one editor directly said to me, ‘I always used to say, if we let the first boat drown no one else will attempt to cross the Mediterranean Sea.’”

The ex-staffer was tired of the racist comments about how refugees in Germany would destroy German culture and the country’s values and said: “When a terror attack, allegedly carried out by an Islamic extremist broke, one editor shouted ‘these f**king Muslims.’”

They said all the employees within DW know very well who is racist and who isn’t which they refer to as “almost an internal joke”. When the former employee approached some lawyers to help them fight harassment, they said: “The first thing they told me was that DW is one of the worst employers in Germany.”

Responding to the allegations, the DW Management Board said in a statement: “The allegations DW is currently being confronted with are unfounded. All incidents described in an article in the Guardian date more than 18 months back, and in some cases, even further.”

DW  Management added: “[We were] made aware of a small number of cases which were immediately and thoroughly investigated. This resulted in terminations of employment and employment law measures against the persons accused.”

TRT World’s other interactions with current staff were put off as they were too scared to talk. However, Germany was hit with another “No Arabs please” racial discrimination controversy last week. An Egyptian man’s “worst rejection letter” from a German architecture firm has gone viral on social media.

The Federal Anti-Discrimination Agency has said that racial discrimination in the workplace is higher in Germany than rest of the EU. Across the EU bloc, the frequency of discrimination among people of African descent is 9 percent, while it hits 14 percent in Germany. Also people with “foreign-sounding names” were 24 percent less likely than those with German names to be called in for an interview.

Artists Provide a ‘Breath of Fresh Air’ During Crises. Read on! This Is Why the statue Of Thomas Jefferson Will Be Removed 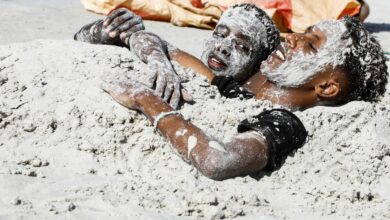 A best photos from across the continent and beyond

‘Blurred Lines’: There is Begging to Eat and Begging For The Boss!