Demi Lovato shared behind-the-scenes footage from one of her promotional photo shoots for her new album, Dancing with the Devil … the Art of Starting Over.

In her latest Instagram post on Thursday, the 28-year-old singer made a number of outfit changes, including a plunging floral minidress and pink tinted sunglasses.

Later, she stunned in a flowing blue gown, a studded headpiece and purple glitter sprinkled across her cheeks as she posed up a storm at an Airbnb in Joshua Tree.

The Met Him Last Night hitmaker could be seen in multiple locations around the beautiful home, owned by American Psycho film producer Chris Hanley.

The property can be rented for $5000 an hour at night or $1000 an hour during the daytime, according to the rental website Splacer.

In June, Lovato teased fans that she was at the rental to ‘work on a project’ as well as enjoy a romantic weekend with her ex-fiancé Max Ehrich.

Reflecting on their trip together at the time, she wrote on social media that she ‘had an amazing weekend in the magical desert of Joshua Tree with’ her love, who proposed one month later.

Since their messy split months later in September, fans have speculated her new songs, 15 Minutes, is about him using her for clout.

On Thursday, Thursday, the performer also  revealed she ‘rescued a baby chick’ on vacation, while in Hawaii.

‘I’m attached,’ Lovato gushed as she posed for a selfie with a yellow chick. ‘We rescued a baby chick in the backyard and found their family and reunited them. Can’t wait to show y’all.’

She gushed: ‘Lowkey my highlight of the trip.’

Additional footage showed the star showing off her cool, yin yang manicure as she stroked the little chick.

In the background, the Disney Channel alum could be seen fawning over the adorable bird and saying it was ‘so cute.’ 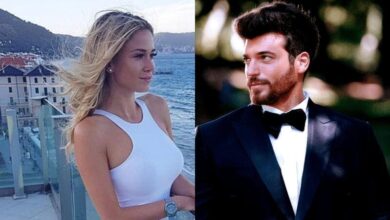 Diletta Leotta and Can Yaman Wedding Was the Reason They Separated