They turned 29-years-old on Friday, and have dropped something truly special as part of the birthday celebration.

Demi Lovato premiered a bold music video for their new song Melon Cake on Friday, with the title referencing a shocking part of the singer’s history previously revealed in their recent YouTube documentary.

The Confident hitmaker appeared in several fabulous getups in the new clip, including a glam western inspired look as well as a sleek and green aquatic moment.

The video opened with a brief passage showing a child picking out a birthday cake, before the song led to its chorus, ‘No more melon cakes on birthdays’.

The lyric refers to a memory Lovato shared in their YouTube Originals documentary Dancing With The Devil, about how their management would only allow them to eat a watermelon cake for their birthday earlier in their career to encourage weight loss and a slimmer figure.

The clip then showed Demi assuring listeners they ‘finally get to do things my way,’ as they stood in a boxy button down shirt on a cylindrical green lawn dancing amongst colorfully stockinged kicking legs.

The Grammy nominee was also seen on stage singing with a band, rocking a giant black Stetson hat and a black blazer.

Their eyeshadow was a bright swipe of green.

Melon Cake included other glamorous moments, with Demi wearing sparkly black lipstick and a glittery gold outfit, but it was not without some bizarre beats as well.

Screen transitions distorted the singer’s face, with another moment showing Lovato giving the camera a strange expression as they sang, ‘You could find me, Starving for attention most days, Amongst others things, god help me’.

Demi has previously been open about their struggles with bulimia for years, in their efforts to destigmatize eating disorders and mental health issues and inspire others to speak up and get help.

At the end there was a sweet moment during the lyric, ‘Dear little me, I’m sorry that it took so long, But baby, you’re free,’ in which the little girl was seen again, blowing out the candles on a real birthday cake covered in frosting and sprinkles.

Paris shared a fabulous screenshot of the twosome on her Instagram Stories, from Lovato’s recent visit to her cooking show Cooking with Paris on Netflix.

Happy birthday @DDLovato,’ Hilton wrote in the caption, along with some party emojis.

‘Thank you for being a radiating light in my life. Your ability to be yourself and embrace who you are inspires me and numerous others every day. Keep being you! Beautiful and free,’ Paris concluded.

The birthday activity comes as Demi recently weighed in again on their breakup with actor Max Ehrich from last year.

The Sorry Not Sorry hitmaker acknowledged during a talk for The 19th Represents Summit that the relationship and its demise ‘had everything to do’ with the onset of the coronavirus pandemic and ensuing lockdown last year, which coincided with Lovato’s journey in ‘starting to identify as non-binary’.

‘Then I met someone and I got into this straight relationship, and that was great, but that led me to ignoring all the parts of myself that I didn’t think were digestible for my partner at the time, who ended up becoming my fiancé,’ they shared, referencing their engagement to Max, 30, last September.

The engagement lasted less than a month.

‘In hindsight, the dissolvement of that relationship was actually probably the best thing that’s happened to me, because of what that led inside of myself,’ the Heart Attack singer continued.

‘It was the dissolvement of all things that had held me back from identifying as the person I do today.’

Salma Hayek Forces Herself to Give Her Daughter Some Space 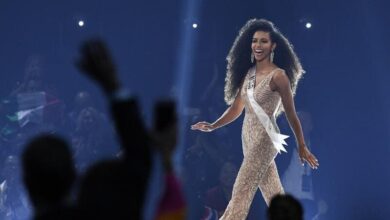