They are officially in love.

And Turkish actor Oğuzhan Koç has confirmed that he and Turkish actress Demet Özdemir are romantically involved via a story he posted on Instagram.

A week ago, it’s been rumored that Oğuzhan and Demet are secretly dating and that he moved to live nearby Özdemir.

Koç wrote in the romance announcement: “Even if it wasn’t like this when rumors appeared in the past, now Demet Özdemir and I are living a beautiful relationship together.” 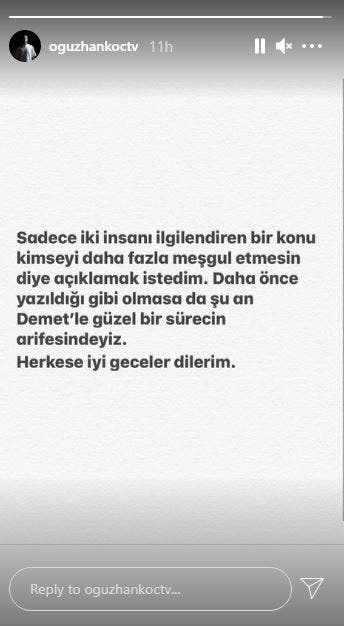 Oğuzhan Koç decided to go public with the romance after he was seen behind the scenes of O Ses Türkiye (The Voice Turkey).

Koç was not participating in the show but he went there to support his new girlfriend Demet Özdemir who was taking part in the episode. He was even with her during rehearsals too.

Before the official announcement, Turkish journalist Akef Yaman had already confirmed Demet and Oğuzhan’s romance when he reported that they exited a hotel together in Çeşme and commented: “You will see pictures of them together soon”, and the couple panicked when they saw reporters outside of the hotel.

Even fans of Demet Özdemir were believed to have known about her relationship with Oğuzhan when she and Oğuzhan Koç’s ex girlfriend Yağmur Tanrısevsin unfollowed each other on social media to spark more rumors of the alleged romance.

Neslihan Atagül Beats Her Husband Kadir DoğUlu With Her Hit Series Sefirin KıZı & Goes to No.1 in Turkey!

Mohammad Hadid Hints His Daughter Gigi Hadid Has Given Birth