Protesters have gathered in Baghdad’s Tahrir Square to mark one year since a second wave of anti-government protests erupted and gripped Iraq.

Iraqi security forces fired water cannon and tear gas at the protesters during Sunday’s demonstrations to prevent them crossing fences on a bridge leading towards government buildings.

The rallies renewed calls from early October last year, which saw the start of Iraq’s biggest anti-government protest movement since the 2003 fall of Saddam Hussein, with demonstrations in the capital Baghdad and Iraq’s mainly Shia south demanding basic services, employment opportunities and an end to corruption.

“Our blood, our souls, we sacrifice for you Iraq,” chanted hundreds of protesters as they marched through the capital’s Tahrir Square, epicentre of the protest movement.

The demonstrations became a nationwide, decentralised movement that called a complete overhaul of the political system and slammed a political class protesters saw as more loyal to Iran and the US than to Iraqi citizens.

“Today’s an important day as it marks a year since October 25, 2019 and our revolution for which we gave our blood and sacrificed many martyrs,” Muntather Mahdi, a 24-year-old protester, told Al Jazeera.“On the top of our demands is holding the killers and kidnappers accountable. Justice must be achieved and we’ll keep coming until we see that,” said Mahdi, who came from the province of Dhi Qar.

Protesters from various parts of Iraq started making their way to the capital last night for Sunday’s protests.

While many managed to enter Baghdad and reach Tahrir Square, some riding cars and other vehicles were prevented by security forces, according to activists and journalists. 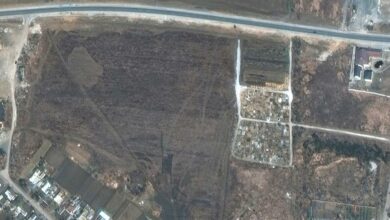 Israel will act alone against Iran if needed: Foreign Minister