A Japanese artist is allowing her customers to live out their darkest fantasies in her unusual photography studio.

Leiya Arata, who is in her thirties, holds funerals for sex dolls, encourages people to dress up as murder victims for photo shoots and turns people into love dolls.

The photographer, who set up the fantasy studio at the start of the year in Osaka in western Japan, charges up to £630 for the funerals.

She says her customers at Love Doll Funeral are all looking for a place where they are loved, accepted and approved.

Leiya said: ‘They are all great human beings but have very low self-esteem.

‘Their desire to change or be accepted and loved is so strong and this is the only place for many of them. I want to be there for that.’

Leiya said of her assistant: ‘I don’t know anyone who understands sex, dolls and their owners, and offers an appropriate ceremony better than her.’

The ceremonies see the life-like figurines placed in coffins, wrapped in burial clothing and decorated with garlands.

Other ‘mourning’ sex dolls watch on during the bizarre service which also has undertakers, candles and prayers.

Leiya told Spanish news agency EFE: ‘I started the business because I felt it was a real need.

‘Many owners do not want them to be shredded as garbage, there are many who love them as if they were human members of their family.’

She added that many owners fear being shamed for leaving the dolls in the bin where they may be found by passersby.

This has even led to the police being called after people mistook the dolls for corpses.

Other services include dressing people up as sex dolls or corpses for photo shoots.

She also allows men to dress up as women and have their own funeral.

Ai Kaneko, a 39-year-old single nurse, travelled to the studios to be turned into a sex doll.

She told EPA: ‘I wanted to be beautiful and be possessed by someone. Not to be dominated, but to be loved and cherished, like sex dolls are.’

She says the studio has saved from suicidal thoughts she has suffered for 15 years after finding the body of her boyfriend who had hanged himself.

Around 2,000 sex dolls, which cost from $6,000 and can come with adjustable fingers, removable head and genitals, are sold each year in Japan, according to industry insiders. 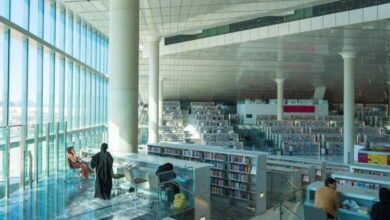 The Largest Libraries in the Arab World