Syrian actress Dana Jabr is still going through difficult times after lingerie-audacious pictures of her in sexy positions were leaked.

Obviously Dana has nothing to do with these videos, as commentators stressed that some psychopaths are taking advantage of her trending name to achieve more viewership. 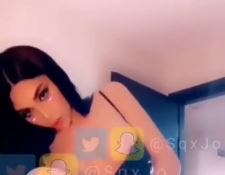 Previously, Dana had responded to ‘leaking her images’ incident during her interview with Syrian anchor Ahmed Al-Derea.

She said: “It does not matter what was stolen from my phone, what is important is the privacy that was unlawfully violated.”

Jabr continued: “Unfortunately, I do not know why the more I prosper at my work, I find them talking about another matter that has nothing to do with it, but rather about my beauty as a female that God created, I am one who has her people and audience who love her.”

Has Yasmin Abdel Aziz Been Admitted to ICU Again?