Iran’s President Hassan Rouhani said on Monday that US imperialism is a virus which is more harmful than the coronavirus pandemic, according to Iran’s semi-official Fars news agency.

Iran has been hit hard by the new coronavirus, known as COVID-19, which has killed 4,683 people in the country as of Tuesday. While the Iranian regime has been accused of mishandling the crisis by prioritizing political ideology over public health, Tehran has in turn peddled conspiracy theories that the virus was an act of biological warfare by the US. Iranian officials have also blamed Israel and Jews more broadly for the virus.

President Rouhani, who frequently criticizes the US and its sanctions campaign against Iran, reportedly made the comments comparing US imperialism and COVID-19 on the phone to Venezuelan President Nicolas Maduro, a fellow critic of American foreign policy.

“Iran and Venezuela have been able to withstand the invasive and old virus of the US well through solidarity and boosting cooperation,” IRNA reported Rouhani as saying.

Watch: #Iran’s President Hassan Rouhani praises a campaign calling for US sanctions against the republic to be lifted amid the #coronavirus pandemic, crediting its launch to the Tehran’s foreign ministry. https://english.alarabiya.net/en/News/middle-east/2020/03/27/Iranian-president-credits-foreign-ministry-for-campaign-to-lift-sanctions-.html … 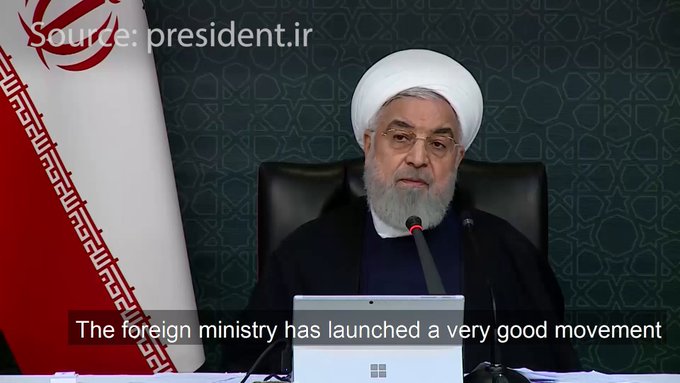 16 people are talking about this

Calls for cooperation with OPEC+

Rouhani also called for cooperation with the Organization of Petroleum Exporting Countries (OPEC), Russia, and others, known as the OPEC+ group, agreed on the weekend to a historic 9.7 million barrel per day (bpd) oil output cut.

According to Fars, Rouhani reportedly said that Iran and Venezuela should cooperate with OPEC+.

“We need to continue cooperation for reduction of production and the return of stability to prices,” Fars quoted him as saying.