Kansas harvester Mike Keimig is growing increasingly anxious about whether the foreign seasonal workers he needs to run his nine combines and drive his grain trucks will arrive in time for the start of the winter wheat harvest, which is just weeks away.

His regular crew mostly comprises farm kids from South Africa who return to work for him every year, but they are stuck overseas. The paperwork for about half of the 20 agricultural worker visas he has applied for remains in limbo at the shuttered US Consulate in Johannesburg.

The closure of embassies and consulates due to the coronavirus pandemic is not the only obstacle to bringing in seasonal workers. Governments have closed their borders. Overseas workers who have visas cannot get on a flight. And once they arrive, they would face weeks of quarantine before they could work.

“It will definitely have a big impact on our finances … if we can’t get help to run our equipment,” Keimig said.

“It would even have an effect on the farmers. Well, maybe they can find somebody besides us to do it, I don’t know?” he said. “But I think it would be a little tough because there are a lot of us in the same situation.” 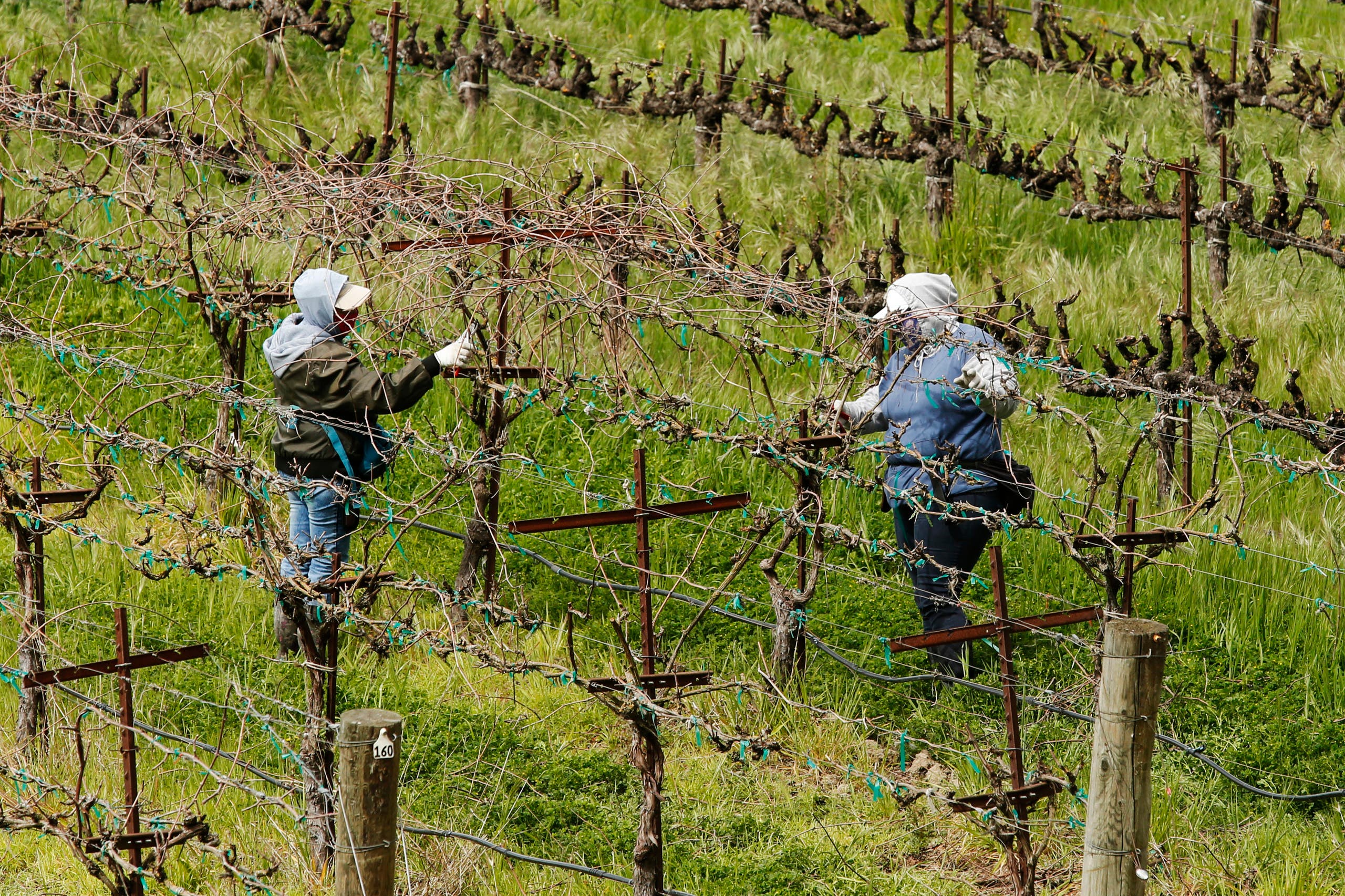 In this March 24, 2020, photo, farmworkers keep their distance from each others they work at the Heringer Estates Family Vineyards and Winery in Clarksburg, Calif. Farms continue to operate as essential businesses that supply food to California. (AP)

Harvester crews typically traverse the nation with their combines and grain trucks taking on work where the crops are ripening. They usually work the same farms every season, saving the farmers the cost of investing in harvester equipment.

About 30 percent of US harvest operations use foreign workers on their crews, according to Mandi Sieren, operations manager for the industry trade group US Custom Harvesters Inc.

Temporary agricultural worker H-2A visas have been largely spared from immigration rollbacks because agriculture is an essential industry, but the workers can’t travel to the US right now because of the restrictions imposed to prevent the spread of the coronavirus, Sieren said.

As for hiring locally, harvesters “would absolutely love to hire Americans but there are not very many Americans who would leave home for six to nine months at a time,” she said.

As many as half of the workers who harvest US wheat and other grain crops are seasonal foreign workers, said Ryan Haffner, a Kansas harvester and board member for US Custom Harvesters.

“We are always looking for American workers. I mean, that is a constant search,” Haffner said. But many Americans are “disconnected from agriculture” and lack interest or the skills required to work in farming.

“There are more people overseas really that have an interest and still a working knowledge of agriculture,” he said.

Modern harvesting machines are computerized and sophisticated, so it’s not easy for the city-dwelling unemployed to just pick up, adapt and learn to operate them, Haffner said.

Typically, a third of Haffner’s crew of up to 20 workers is American, while the rest come from South Africa, Europe and South America. He has the agricultural worker visas for his foreign workers for this harvest season, but was only able to get a few of them into the US before coronavirus restrictions effectively shut the others out.

The harvest season begins in mid-May in north-central Texas, before moving into Oklahoma, Kansas, Colorado, Montana and North Dakota. In the summer, they cut mostly wheat. In early fall, they harvest peas, canola, soybeans, grain sorghum and corn. Haffner can’t afford to miss a season. 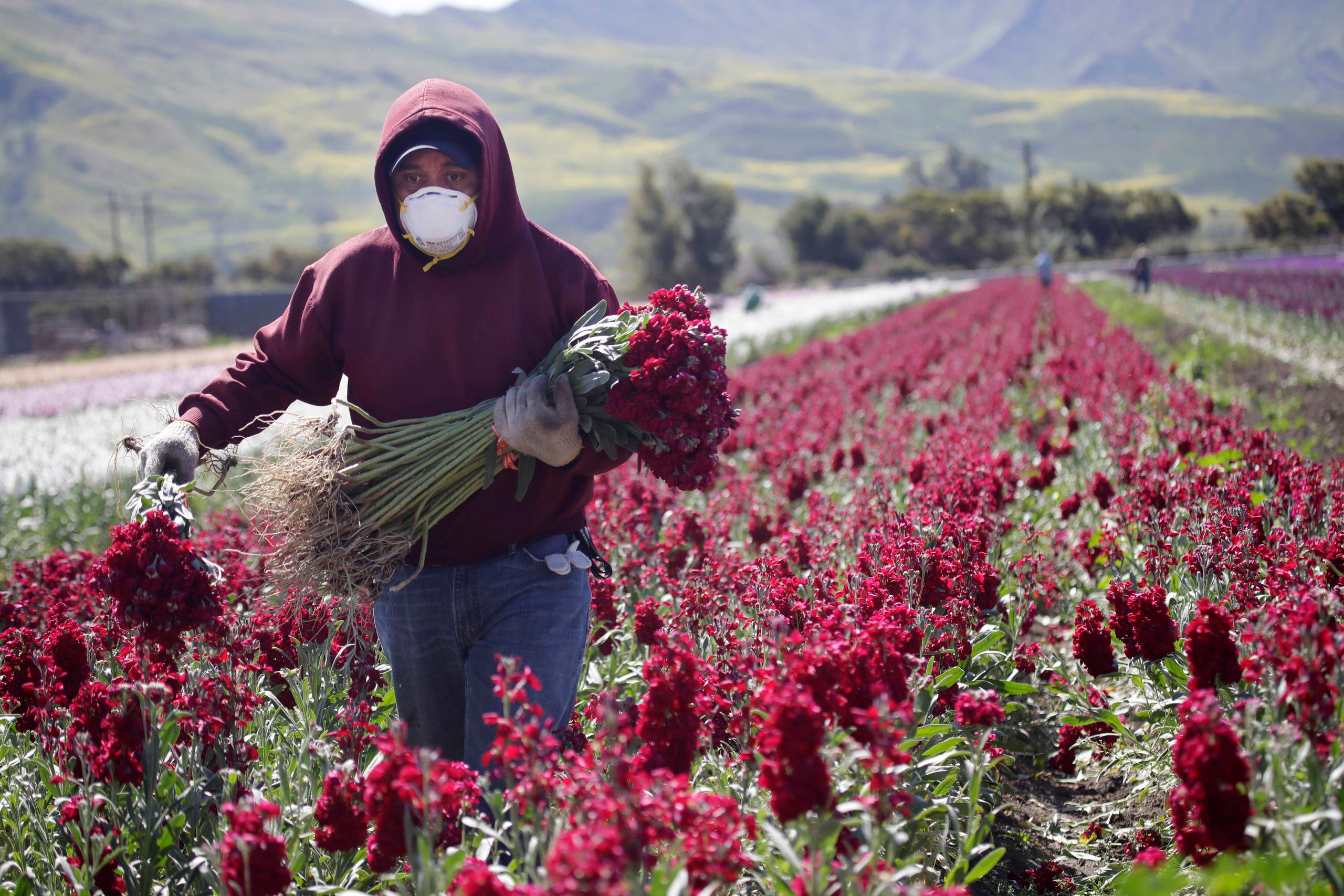 A farmworker, considered an essential worker under the current COVID-19 pandemic guidelines, wears a mask as he works at a flower farm Wednesday, April 15, 2020, in Santa Paula, California. (AP)

“I have got $5 million worth of equipment – I can’t not be there,” Haffner said. “So we are going to be there. We are going to get to our customers. It is just going to be much more difficult than usual. We intend to get through it.”

Some harvesters are turning to relatives and friends to work for a few weeks or more until the foreign workers can arrive. Some have been able to hire Americans for the whole season. Others are trying to do as much as they can themselves.

Don Kotapish, a 72-year-old farmer who also does a bit of cutting for others on the side, usually brings in a couple of workers from South Africa to help him on his 6,500-acre property in Blue Rapids, Kansas. He said he has been working from 6 a.m. until 9 p.m. or later every day because he hasn’t been able to hire any help.

“Not only are we short on help, but we aren’t getting anything for our products,” Kotapish said. “The cattleman and the grain farmers are all in the same situation. That adds more stress.”

Texas harvester Shorty Kulhanek usually hires fewer than five seasonal workers, and he has been able to pick up some workers from Oklahoma, Kansas, Wisconsin and Washington this season.

He said it was easier to find Americans to join his crew because so many people are out of work.

Furthermore, Kulhanek’s applications for seasonal agricultural worker visas have yet to be approved, and he was told that might not happen until July 15.