Sheikha Fatima bint Mubarak, Supreme Chairwoman of the Family Development Foundation (FDF), on Monday launched an online Ramadan campaign to promote optimism in times of adversity as the country battles with the coronavirus outbreak.

The campaign, themed “Rejoice! What is coming is better than what is gone!” aims to promote social cohesion, as well as motivate individuals to provide psychological and social support to others, Emirates News Agency (WAM) reported.

In collaboration with the FDF, the Department of Community Development, and several other community development organizations, Sheikha Fatima – the wife of the late Sheikh Zayed and the mother of Abu Dhabi’s Crown Prince Sheikh Mohammed bin Zayed – called on families and the youth in the UAE to help cultivate an environment where cohesion and creativity can thrive.

“It is significantly important under the current critical times to get closer to children and disseminate hope and positive feelings. Children tend to require more and more reassurance than others,” she was quoted by WAM as saying.

“Parents should simplify the precautionary measures taken to curb the spread of COVID-19 and explain them in a simple manner to their kids to ensure they are always feeling assured and positive about the future,” she added.

Sheikha Fatima praised the UAE’s youth who, despite dealing with unprecedented challenges since the outbreak began, have been determined to keep learning, according to WAM.

Students across the country have been studying from home using the distance learning system since March and will continue to do so until the end of the current 2019-2020 academic year.

“The UAE has been among the forerunners who opted for the remote education system, choosing not to shut down schools. In so doing, we have been inspired by the UAE leadership’s determination to provide our students with a learning-conducive environment,” she said.

The UAE has so far reported 14,730 confirmed coronavirus cases and 137 deaths. 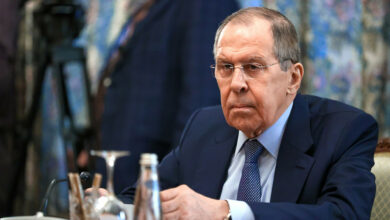 In Lebanon, a growing rift between Hezbollah and their long-time Christian ally