When Turkey changed the way it reports daily COVID-19 infections, it confirmed what medical groups and opposition parties have long suspected – that the country is faced with an alarming surge of cases that is fast exhausting the Turkish health system.

In an about-face, President Recep Tayyip Erdogan’s government this week resumed reporting all positive coronavirus tests – not just the number of patients being treated for symptoms – pushing the number of daily cases to above 30,000. With the new data, the country jumped from being one of the least-affected countries in Europe to one of the worst-hit.

That came as no surprise to the Turkish Medical Association, which has been warning for months that the government’s previous figures were concealing the graveness of the spread and that the lack of transparency was contributing to the surge. The group maintains, however, that the ministry’s figures are still low compared with its estimate of at least 50,000 new infections per day.

No country can report exact numbers on the spread of the disease since many asymptomatic cases go undetected, but the previous way of counting made Turkey look relatively well-off in international comparisons, with daily new cases far below those reported in European countries including Italy, Britain and France.

That changed Wednesday as Turkey’s daily caseload almost quadrupled from about 7,400 to 28,300. 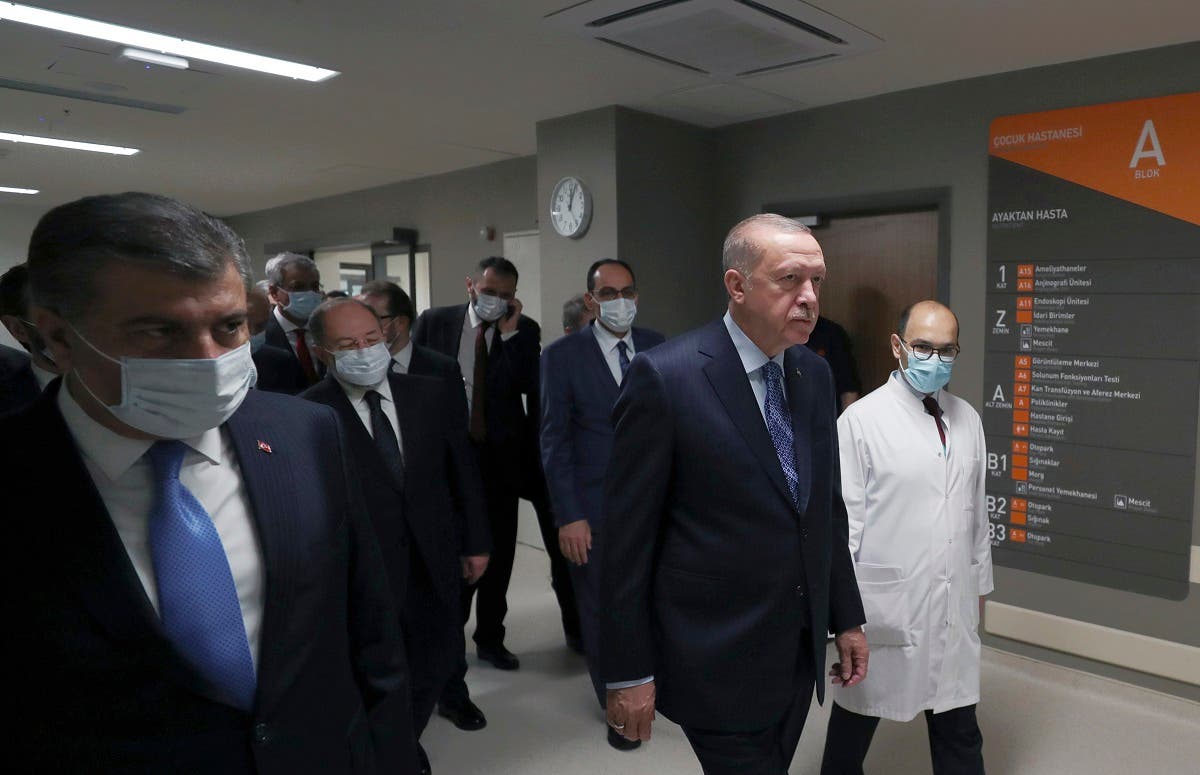 The country’s hospitals are overstretched, medical staff are burned out and contract tracers, who were once credited for keeping the outbreak under check, are struggling to track transmissions, Sebnem Korur Fincanci, who heads the association, told The Associated Press.

“It’s the perfect storm,” said Fincanci, whose group has come under attack from Erdogan and his nationalist allies for questioning the government’s figures and its response to the outbreak.

There is a shortage of nurses and the existing nursing staff is exhausted, she added.

“ICU nurses have not been able to return to their normal lives since March,” she told the AP. 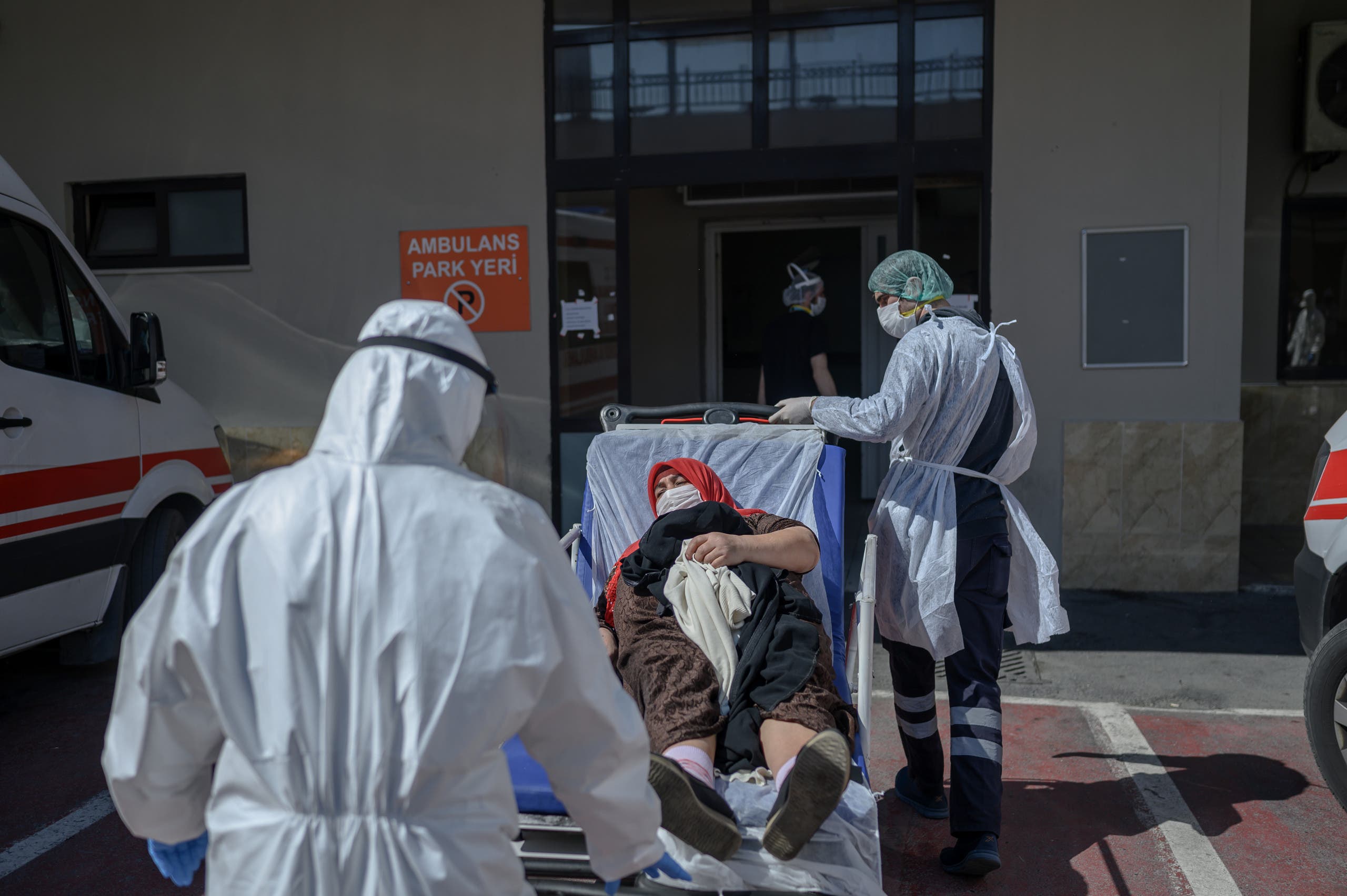 Health workers transport a patient supposed to be infected by the novel coronavirus Covid19 in front of Bagcilar public hospital in Istanbul, on April 28, 2019, in Istanbul. (AFP)

“Their children have not seen their mask-less faces in months.”

Erdogan said, however, there was “no problem” concerning the hospitals’ capacities. He blamed the surge on the public’s failure to wear masks, which is mandatory, and to abide by social distancing rules.

Demonstrating the seriousness of the outbreak, Turkey last month suspended leave for health care workers and temporarily banned resignations and early retirements during the pandemic.

Similar bans were also put in place for three months in March.

The official daily COVID-19 deaths have also steadily risen to record numbers, reaching 13,373 on Saturday with 182 new deaths, in a reversal of fortune for the country that had been praised for managing to keep fatalities low. But those record numbers remain disputed too.

Istanbul Mayor Ekrem Imamoglu said 186 people had died of infectious diseases in the city on Nov. 22 – a day on which the government announced just 139 COVID-19 deaths for the whole of the country. The mayor also said around 450 burials are taking place daily in the city of 15 million compared with the average 180-200 recorded in November the previous year. 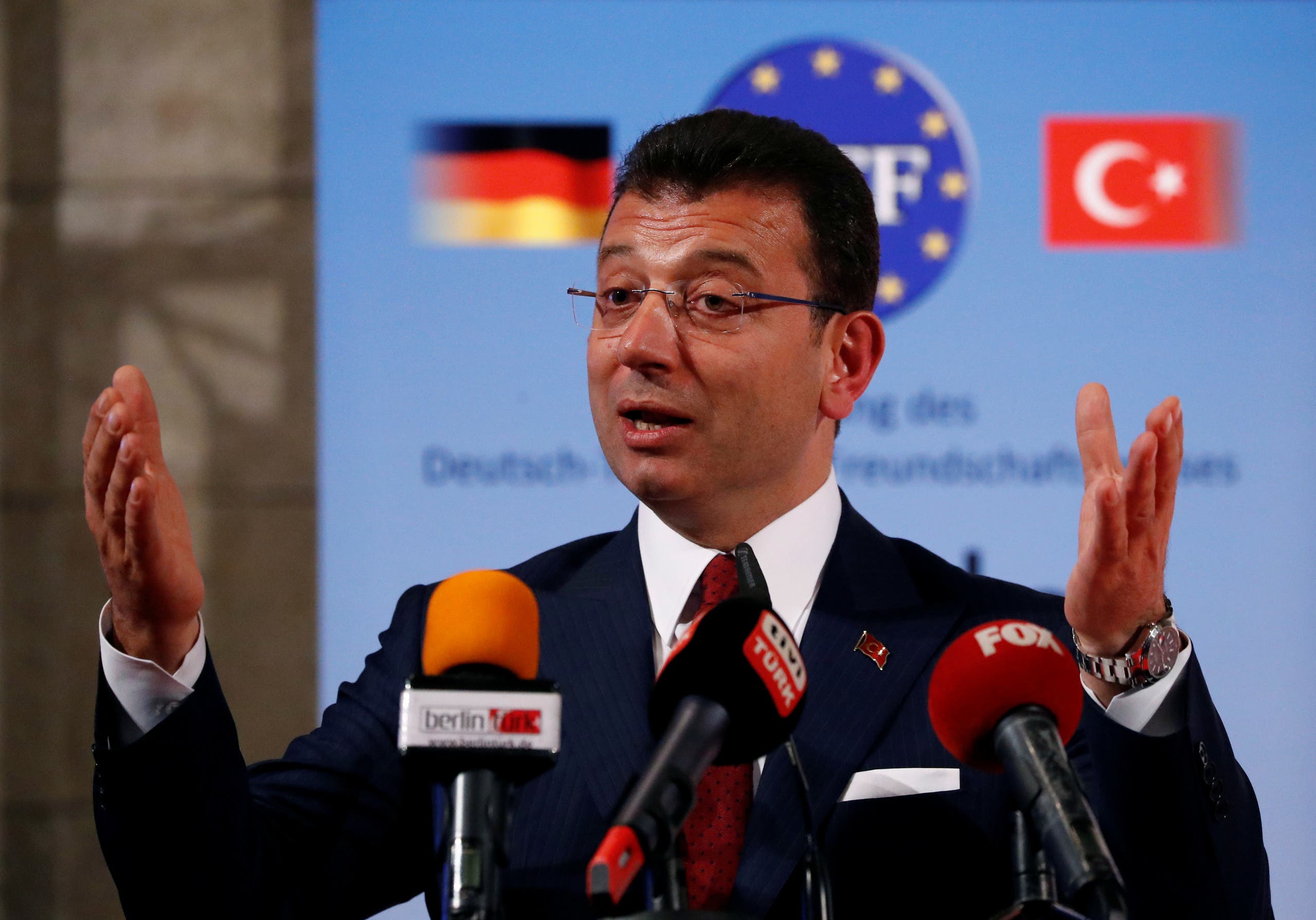 “We can only beat the outbreak through a process that is transparent,” said Imamoglu, who is from Turkey’s main opposition party.

“Russia and Germany have announced a high death toll. Did Germany lose its shine? Did Russia collapse?”

Japan yearns for charisma as race to replace Suga heats up