Egyptian President Abdel Fattah al-Sisi on Saturday postponed moving civil servants to a planned new administrative capital city to 2021 from 2020 due to the coronavirus epidemic, a blow to a flagship project for Sisi that has already faced delays.

Sisi also postponed the launch of some other big projects including the Grand Egyptian Museum and the National Museum of Egyptian Civilization to next year, the presidency said in a statement.

The decision was “due to the circumstances and repercussions of the process of combating the spread of the new Coronavirus either at the national level or globally,” it said.

The first group of civil servants was to be transferred to the government district in the still under-construction new administrative capital, 45 km (28 miles) east of Cairo, in June.

Sisi’s government has said it wants to start running Egypt from the new city as soon as the middle of 2020. But the $58 billion project has struggled to raise funds and faced other challenges after some investors pulled out.

Before the announcement, one employee involved with projects at the new capital said some companies working there had partly suspended work at the site and that some workers were being asked to stay at home on half wages amid measures to prevent the spread of the new coronavirus.

A spokesman of the Administrative Capital for Urban Development, the owner and developer of the project, denied reports that construction works stopped due to coronavirus, telling Reuters that some contracting companies just lowered the numbers of labors as a precautionary measure.

Housing minister on Saturday briefed Sisi on measures taken to assure the safety and health of workers and the continuation of work at various projects despite the postponements, the presidency said.

Announced at an economic conference in 2015, the new desert city is envisioned to replace Cairo, the existing capital on the Nile that has become a traffic-clogged, urban sprawl of more than 20 million people.

Egypt has reported 1070 coronavirus cases as of Saturday including 71 deaths. The most populous Arab country has been hit hard by the outbreak, which has wiped out its tourism industry and prompted authorities to close airports, restaurants, firms and shops and to impose a night curfew.

The Grand Egyptian Museum, built next to the Giza Pyramids, was due to open during the last quarter of 2020, and the official launch of the National Museum of Egyptian Civilization, which was opened partially in 2017, was planned this year too. 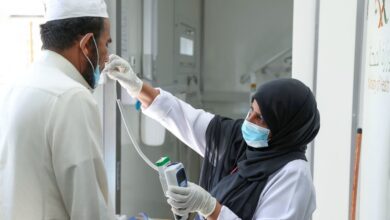