Oman recorded its highest daily increase in coronavirus cases on Sunday, with an increase of 513 cases bringing the total in the country to 7,770 on the first day of Eid al-Fitr.

The sultanate has been the least badly affected Arab Gulf state, but cases have began to rise more steeply in the past week.

On Saturday, Oman reported 463 new cases following a rise of 424 new cases the previous day. These increases of above 400 cases per day marked an acceleration of the trend, as Oman had been reporting less than 100 new daily cases in early May. On May 1, the country had only 2,447 cases, following a rise of 99.

The Ministry of Health reported that the majority of new infections were found in non-Omanis, with 179 of the 513 being Omani citizens.

The ministry reiterated its call to practice social distancing and good hygiene to avoid further spead of COVID-19.

Authorities had previously banned all social gatherings relating to Eid al-Fitr, which began on Sunday in Oman. Violators will be fined or jailed, announced the country’s Supreme Committee for Dealing with COVID-19 on Monday. The country has also postponed municpal elections due to the virus. 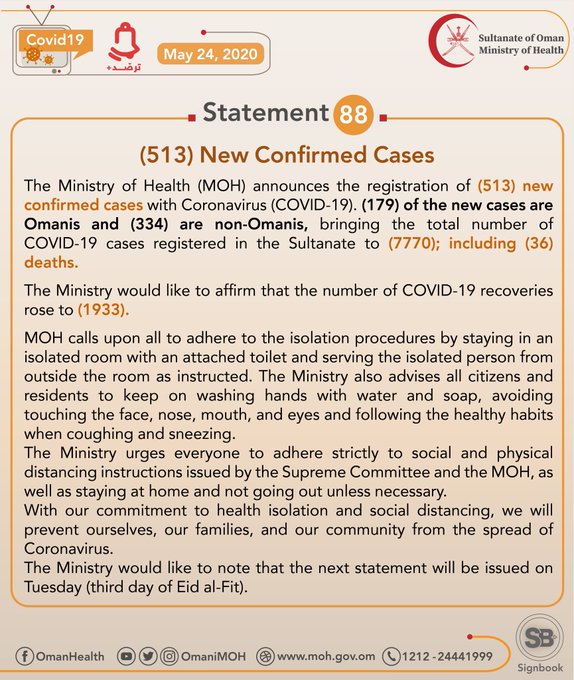