Gebran Bassil, head of Lebanon’s Free Patriotic Movement and son-in-law of President Michel Aoun, has tested positive for coronavirus, according to statement released on Sunday.

The former foreign minister received his positive test results Saturday evening, but further testing showed that his infection is considered mild, according to a statement released by the Free Patriotic Movement media office.

“Bassil will of course quarantine until he overcomes the virus, God willing, and will continue his work as usual,” the statement carried by local Annahar newspaper read.

Bassil also urged the Lebanese people through the statement to adhere to coronavirus precautionary measures and to take the matter seriously, adding that the virus has a “lethal ability to strike and paralyze society.”

Lebanon has seen a drastic surge in cases over the past few weeks as the government struggles to contain the outbreak.

“New daily cases have doubled in ten days, the test positivity rate is above 9 percent, and hospital occupancy is around 70 percent despite recent expansion in ICU bed capacity,” Firsass Abiad, the head of the Rafik Hariri University Hospital, said on Twitter Sunday.

In addition to the coronavirus outbreak, Lebanon has struggled with economic turmoil as well as an ongoing political crisis. The country is currently without a government, with the Prime Minister-designate Mustapha Adib stepping down from his position last week. 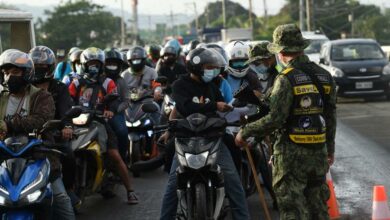