Kuwait recorded 161 new cases of the novel coronavirus, bringing the total number of confirmed cases in the country to 1,154, the Ministry of Health announced on Saturday.

The number of daily confirmed cases in the country has not peaked in Kuwait yet, and will continue to rise, according to data collected by John Hopkins University.

Meanwhile, 124 people were infected with the virus in Kuwait after they came into contact with previously infected individuals. 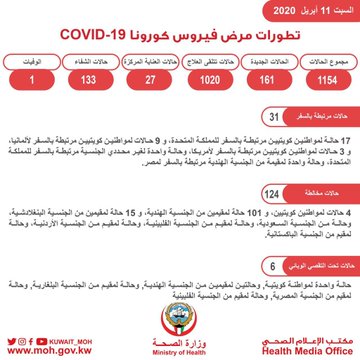 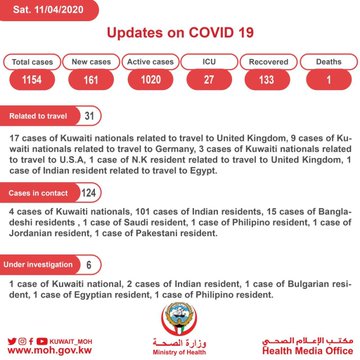 Currently, six people are under epidemic investigation to determine how they were infected.

A total of 133 people have recovered from the virus in Kuwait.

A nationwide 11-hour curfew was imposed, but the number of daily reported cases are on the rise in Kuwait.
Kuwait has imposed several strict measures to curb the coronavirus pandemic, including halting all international flights and suspending schools and universities until August.

Kuwait announced on Tuesday the imposition of a full lockdown the two areas Jeleeb Al-Shuyoukh and Mahboula in Kuwait city, where migrant workers make up the majority of inhabitants.