Meanwhile, the death toll reached 30 after four new fatalities were recorded over the past 24 hours. The number of recoveries continues to rise with 63 new ones raising the total to 1,602 out of a total 4,377 infection cases.

As the Kingdom maintains its low death toll, 70 people remain in the intensive care unit (ICU) with 36 in critical conditions.

The first three cases in Kuwait were announced on February 24, all of which had arrived from Iran which was witnessing an explosion of cases at the time. Many of the subsequent cases confirmed in Kuwait during late February were also people arriving from Iran.

Recently, as the country began repatriating its citizens, the number of travel-related cases grew, as well as number of local transmission where people did not adhere to social distancing became infected.

About 95 percent of the new cases announced Friday are cases of contact, according to the health ministry.

Authorities continue to urge people to adhere to social distancing rules and to comply with precautionary measures such as wearing a face mask and avoiding crowds and gatherings. 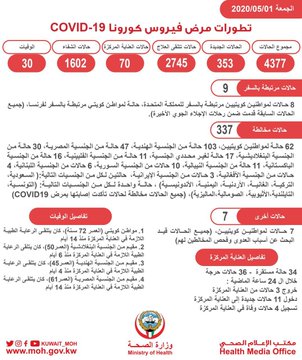 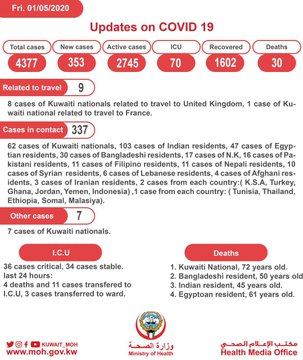