Kuwait confirmed 151 new coronavirus cases and one new death in the last 24 hours, bringing the total number of cases in the country to 2,399 and the virus-related death toll to 14, the Ministry of Health announced on Thursday.

A 41-year-old Kuwait national who was being treated in the intensive care unit at one of Kuwait’s coronavirus facilities died from the virus.

A total of 132 people were infected after they had direct contact with previously infected individuals, the ministry added. 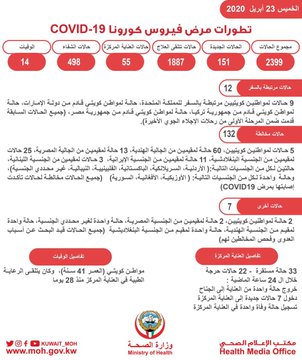 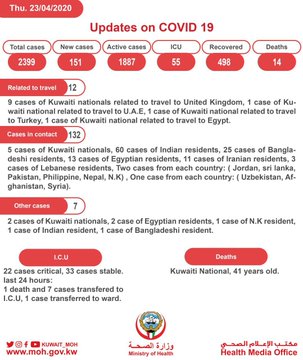 434 people are talking about this

The number of recovered cases in Kuwait rose to 498 on Thursday after health minister Basel al-Sabah announced 55 new recoveries.

Seven other new cases are currently under epidemic investigation to determine how they were infected.

The number of cases in Kuwait surpassed the 2,000 mark on Tuesday, and the daily reported number of cases has been steadily rising as more citizens return to the country. Kuwait has plans to repatriate 40,000 citizens on 188 flights between April 16-25 from countries around the world, after thousands were left stranded when the coronavirus halted flights globally.

Kuwait on Monday extended its nationwide curfew hours to 16 hours each day starting from the first day of the holy month of Ramadan to contain the outbreak.

Malaysian man sentenced to death in Singapore via Zoom call Sanaa airport has been closed due to use by Iran, Hezbollah: Yemen’s government