The new coronavirus, which causes COVID-19, likely originated in nature according to the authors of a study questioning the idea it was manmade.

Scientists looked at the genetic make-up of the new member of the large coronavirus family of germs called SARS-CoV-2 (not to be confused with the SARS bug) that causes disease COVID-19. To map its evolution and where it came from, they compared its genetic data with that of other coronaviruses. The team concluded SARS-CoV-2 likely emerged because of natural selection, where organisms adapt to their environment to survive.

Since it first came to the attention of the authorities in December last year after people linked to a wholesale food market in the central Chinese city of Wuhan fell ill, the new virus has caused more than 201,000 cases of COVID-19 and killed 8,006 people, according to Johns Hopkins University. As shown in the graph by Statista further down, over 82,000 people have recovered. SARS-CoV-2 is the seventh known example of a member of the coronavirus family infecting humans.

Study co-author Kristian Andersen, associate professor of immunology and microbiology at Scripps Research, said in a statement: “By comparing the available genome sequence data for known coronavirus strains, we can firmly determine that SARS-CoV-2 originated through natural processes.”

For their paper published in the journal In the journal Nature Medicine, the scientists looked at what are known as spike proteins, which help the virus invade a victim’s body. The features they described may explain why SARS-CoV-2 is so infectious and easily spread in humans, they said.

“By shedding light on how the virus may have emerged, the team said they hope to help prevent potential future cases of pathogens jumping from animals to humans,” they wrote.

The way the virus’ spike proteins interact with a part of human cells called ACE2 is most likely the result of natural selection that enables it to bind optimally, the authors wrote. The backbone of SARS-CoV-2 was also different enough to other known viruses for the team to conclude that it wasn’t manmade.

“This is strong evidence that SARS-CoV-2 is not the product of purposeful manipulation,” they wrote.

Instead, the team hypothesizes SARS-CoV-2 emerged from natural selection in either animals or humans. Bats are a potential host for the virus SARS-CoV-2 mutated from, as are Malayan pangolins, which are illegally important to Guangdong province. The spike proteins of coronaviruses in both these animals have similarities with those of SARS-CoV-2, the team found.

If the original host was an animal, it would likely have a high population density and an ACE2 similar to humans, the team said.

Another theory is that the virus jumped to humans, and then its genetic make-up changed as it passed from human to human. This could have involved a period where the virus was passing in humans unnoticed. Or, like MERS-CoV, the virus could have repeatedly jumped from a host to humans before it started spreading on its own.

“Once acquired, these adaptations would enable the pandemic to take off and produce a sufficiently large cluster of cases to trigger the surveillance system that detected it,” the researchers argued.

A graph showing the number of confirmed cases and recoveries from COVID-19 so far.The team acknowledged: “Although the evidence shows that SARS-CoV-2 is not a purposefully manipulated virus, it is currently impossible to prove or disprove the other theories of its origin described here.

But as they observed all notable SARS-CoV-2 features, including the characteristics of its protein spike, in related coronaviruses, in nature “we do not believe that any type of laboratory-based scenario is plausible.”

More data, including on similar viruses in other animals, “would lend even further support to the natural-selection hypotheses” and could help find a potential intermediate host, they said.

The team concluded: “Irrespective of the exact mechanisms by which SARS-CoV-2 originated via natural selection, the ongoing surveillance of pneumonia in humans and other animals is clearly of utmost importance.”

Co-author Professor Andrew Rambaut of the University of Edinburgh, chair in molecular evolution, said in a statement that it’s impossible to know which form of natural selection occurred. 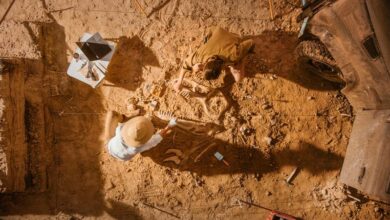