British Prime Minister Boris Johnson is in hospital for tests after showing persistent symptoms of coronavirus 10 days after testing positive for the virus.

His office said it was a “precautionary step”, not an emergency admission.
Johnson continues to lead the government, housing minister Robert Jenrick said on Monday, after the British leader spent the night in hospital for tests, having been admitted a day earlier.

“He’ll stay in hospital as long as he needs to do that, but I’ve heard that he’s doing well and I very much look forward to him being back in Number 10 as soon as possible,” Jenrick told the BBC.

“This isn’t an emergency admission, and so I certainly expect that he’ll be back at Number 10 shortly,” he added, although he gave no timeframe.

“Obviously, today he’s in hospital having the test, but he’ll continue to be kept informed as to what’s happening and to be in charge of the government.”

On March 27, Johnson became the first leader of a major power to announce that he had tested positive. He went into isolation at a flat in Downing Street and said on Friday that he was staying there as he still had a high temperature.

Johnson has continued to chair daily meetings on the UK’s response to the outbreak and has released several video messages during his 10 days in isolation.
Foreign Secretary Dominic Raab is designated to take over if the prime minister is unable to perform his duties.

Johnson is the most high-profile world leader to contract the virus. His pregnant partner, Carrie Symonds, is also recovering from symptoms but has not been tested.

Hancock on Sunday described Johnson’s condition as “OK” and said he had been in “good spirits”.

“He’s very much got his hand on the tiller,” he told Sky News television but said Johnson was being careful to follow government advice on self-isolation.

“Doctors will be monitoring important vital signs such as oxygen saturations,” said Rupert Beale, a group leader at the cell biology of infection laboratory at the Francis Crick Institute.

“They will also check blood tests to see what the immune response to the virus looks like, and to assess liver and kidney function.”

US President Donald Trump said he was “hopeful and sure” Johnson would recover, calling the prime minister “a friend of mine” and a “great leader”.
‘We’ll meet again’

Johnson’s hospitalisation came as Queen Elizabeth II offered a message of hope to everyone affected by the global pandemic, which has seen more than 1.2 million cases and more than 68,000 deaths worldwide.

The monarch’s eldest son, heir to the throne Prince Charles, tested positive after displaying mild symptoms. He has now recovered and is out of self-isolation.

In what was the queen’s fourth address at a time of crisis in her 68-year reign, she said the outbreak could be defeated by a collective effort in a “common endeavour” as she paid tribute to key workers.

“We will succeed, and that success will belong to every one of us,” she said in a speech recorded at Windsor Castle, in Berkshire, a county west of London, where she moved as a precaution on March 19.

“Together we are tackling this disease, and I want to reassure you that if we remain united and resolute, then we will overcome it. 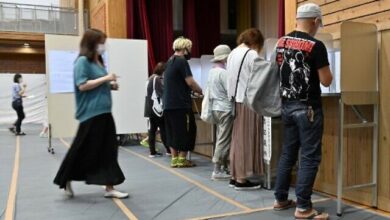