You’re probably reading this on your phone. If not, take it out your pocket and look at it.

It’s a smartphone, isn’t it? Think how often you use it and all the useful things it helps you do. Now, think back. How long since you bought your first smartphone?

It will be about 10 years, most likely a bit less. Not long. Yet they are now ubiquitous: virtually everyone, everywhere has one and uses it for hours every day.

It shows how quickly new technology can take off. The original iPhone was only introduced in 2007 and – bizarre as it now seems – it wasn’t regarded as revolutionary back then.

Check out this Forbes magazine cover published nine months after the iPhone was released.

And Forbes wasn’t alone. The iPhone was just “one more entrant into an already very busy space,” according to the boss of the company that made Blackberrys. Remember them?

Not only have smartphones crushed all other phone technologies, they have upended dozens of other industries too. They’ve killed the camera and powered the rise of social media and dating apps. They’ve decimated the traditional taxi industry.

So what has this got to do with energy?

It proves an important point about all successful new technologies: it is easy to see why they were so transformative in hindsight, much harder to predict how they will reshape our world in advance.

Which brings me to green technology – wind turbines, electric vehicles, solar panels and batteries, that kind of thing.

If you still think adopting these new technologies will be an expensive chore, think again.

So why did the smartphone do so well?

Its success was down to a unique convergence of technologies. For the first time, touchscreens, batteries, data networks, compact computer chips, micro-sensors and more were cheap, reliable and small enough to make a $600 (£460) smartphone possible.

And as demand for smartphones picked up, manufacturers learned how to make those technologies even cheaper and better too.

Something similar is now happening with green tech.

After years of development, it is becoming much cheaper and more effective. The world’s best solar power schemes are now the “cheapest source of electricity in history”, the International Energy Agency (IEA), which analyses energy markets, said this month.

“Renewable energy is likely to penetrate the energy system more quickly than any fuel ever seen in history,” predicts Spencer Dale, the chief economist at the oil giant BP.

And BP is putting its money where Mr Dale’s mouth is. It’s pledged to cut its oil and gas production by 40% in the next 10 years, and to plough money into developing its low-carbon business instead.

Meanwhile, Boris Johnson, the UK Prime Minister, announced a £160m investment that he said would see offshore wind producing more than half of current UK electricity demand by 2030.

That’s right. An investment of just £160m in offshore wind when the new nuclear plant at Hinkley Point, in Somerset, is costing at least £22.5 billion.

How is it so cheap? Because the UK government won’t be paying for the new wind turbines, the private sector will.

In the UK, offshore wind will soon be profitable without subsidy. Indeed, developers may soon have to pay for access to our continental shelf.

Think what that means. You don’t need governments offering inducements for companies to build new renewable power, they’ll be paying us for the privilege of doing so.

But that is just the beginning. What happens when the world doubles down on cutting carbon?

The European Union has already signed up to a €1tn-plus green stimulus plan. China says it is on board too.

At the United Nations’ General Assembly meeting in New York this month, Chinese President Xi Jinping made an unconditional commitment that China would cut its carbon emissions to net zero by 2060.

Japan and South Korea both announced a 2050 net zero pledge this week, and if Joe Biden wins the American presidential election, he has similarly ambitious carbon cutting plans.

Both Biden and the EU have warned they will introduce carbon tariffs to penalise countries that haven’t abated emissions selling high-carbon products in their markets.

That’ll be a powerful encouragement for the rest of the world to follow suit. But even if they don’t, we’d have America, China and Europe – half of world emissions and more than half of world GDP – doubling down on cutting carbon.

That means even more investment in wind, solar, batteries, electric cars, electrolysis, carbon capture and storage, and any other green technology you can think of.

Just like with the smartphone, it becomes a virtuous cycle.

“What we’ve seen up to now is called a learning curve,” explains Spencer Dale. “The more you produce something, the better you get at producing it.”

As the amount of solar and wind capacity in the world has doubled and doubled again, the costs have steadily fallen – something documented by the clean tech advocate Ramez Naam.

“And at the moment there doesn’t seem to be any sign that those learning curves are flattening out,” says Mr Dale.

If he’s right, then costs will continue to fall, making renewables increasingly competitive, which in turn will lead to more investment and more renewable power. You get the idea.

The big challenge with renewables is what they call in the trade “intermittency” – the fact that you don’t get any power when the sun doesn’t shine or the wind doesn’t blow. It is a big problem. Nobody wants the power to go off.

RethinkX, an American think tank specialising in blue-skies thinking on the future of industries, says we need to change our whole mindset about how we generate power.

We are used to worrying about the costs of overcapacity – producing more power than is needed. That’s because the fuel used to generate power is expensive.

Not so with renewables. Once you’ve built them, the power they generate from the wind and sun comes virtually free of charge.

RethinkX says this will do to energy what the internet and smartphones have done to data. Thirty years ago there was an inherent physical cost to every newspaper printed or photo taken. Now that everything is digital, the only limit on how much we read or post on Instagram is the number of hours in our day.

RethinkX argues that instead of simply replacing existing fossil fuel plants with wind and solar – and then worrying about the cost of plugging those big intermittency gaps – we should just build more and more and more wind and solar, perhaps several times the capacity of the existing electricity grid.

Remember, the more we build, the cheaper it gets. So long as we spread them over a wide enough area we’ll always get some power. And we can plug the few small gaps remaining with batteries or other power plants.

And here’s the thing. On sunny and windy days we’ll have a huge surplus of electricity at pretty much no extra cost.

What could you do with huge amounts of cheap power?

You’ll certainly want to use it to make more wind turbines and solar panels. But what about electrolysing water to produce hydrogen that can heat homes, power trucks and ships, or make steel? You could power machines to take carbon dioxide out of the atmosphere.

Or how about a plant to make carbon-neutral aviation fuel from that hydrogen and carbon dioxide? Or a desalination plant to irrigate a desert? RethinkX even suggests the power could be used to mine for cryptocurrencies.

The point is this: the cost of energy is a key constraint in virtually everything we do. So new industries are likely rise up to make use of this plentiful power.

Obviously they’ll have to pay something for this bounty and that’ll mean the power that boils your kettle and charges your electric car will be cheaper too.

A world of low-carbon opportunity

Of course, we are a long way from this utopia. The chances are this vision of unlimited, virtually cost-free energy, may not come to pass – or at least not in the 10-year timeframe they predict.

The sheer physical challenge of building so much new infrastructure means it will take time to build up the supply chains and raw materials needed, and there may be limits to how much solar and wind some countries can harness.

But the central point remains: there are powerful forces driving down the cost of renewable technologies that upend the traditional narrative of decarbonisation.

Contrary to what we are normally told, switching to low-carbon energy doesn’t have to be an onerous obligation that will impoverish us and make life less exciting.

Instead, it could open up a world of new opportunities, new businesses and livelihoods. And what’s more, this could all happen quite soon.

Spencer Dale quotes the eminent German economist, Rudi Dornbusch who said: “In economics, things take longer to happen than you think they will, and then they happen faster than you thought they could.”

And if you don’t believe that, just think about all the changes your smartphone has helped bring about in the world.

I’ve travelled all over the world for the BBC and seen evidence of environmental damage and climate change everywhere. It’s the biggest challenge humanity has ever faced. Tackling it means changing how we do virtually everything. We are right to be anxious and afraid at the prospect, but I reckon we should also see this as a thrilling story of exploration, and I’m delighted to have been given the chance of a ringside seat as chief environment correspondent.

Does The Height of Everest Need to be Measured Again? COP27: The Namibia-Botswana oil project being called a sin 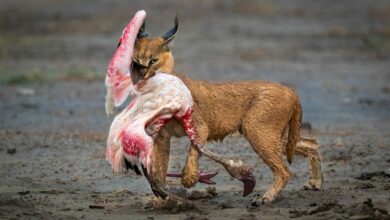