Whether she’s dressed down in sweats or getting glammed up in a dress, Christina Aguilera is always looking her best.

But on Friday the songstress sent temperatures soaring in a slew of seriously sizzling Instagram snaps.

The 40-year-old hitmaker flashed some cleavage in an all-red outfit, and she encouraged her followers to ‘suit up’ in a brief message that was written in the post’s caption.

Aguilera sported a red velvet suit jacket in the shots and notably went topless in the series of snaps.

The performer matched her top with a stylish set of pants that obscured her sculpted thighs and legs.

The Genie In A Bottle singer added a bit of darkness to her outfit with a pair of black shoes as she made various poses.

The hitmaker’s platinum blonde hair contrasted perfectly with the shade of her clothing and fell onto her shoulders and backside.

Aguilera also wore a stylish pair of rectangular sunglasses that added an element of futuristic chic to her outfit in several of the shots.

The singer sported numerous articles of jewelry during the photoshoot and sported a shining necklace for its duration.

She also wore numerous rings and a gorgeous pair of sparkling earrings as she posed for the snaps.

The Grammy-winning hitmaker notably flashed peace signs and stuck out her tongue in her second-to-last picture.

Aguilera recently celebrated the 22nd anniversary of the release of her self-titled debut album, which was released in 1999.

The singer commemorated the special occasion by sharing a video to her Instagram account, where she listed some of the achievements she had made with the release.

Its lead single, Genie In A Bottle, notably went double platinum after it was made available to the public.

The two following tracks, Come On Over (All I Want Is You) and What A Girl Wants, both went platinum following their respective debuts.

The album’s fourth single, Come On Over Baby (All I Want Is You), was also met with critical success upon its release and peaked at the top position on the Billboard Hot 100 chart.

Upon its release, Aguilera’s self-titled album received generally positive reviews from listeners, many of whom praised her singing abilities and the project’s production values as a whole.

She was later nominated for the Grammy Award for Best Female Pop Vocal Performance, which ultimately went to Sarah McLachlan.

The singer ultimately took home the award for Best New Artist during the 2000 ceremony. 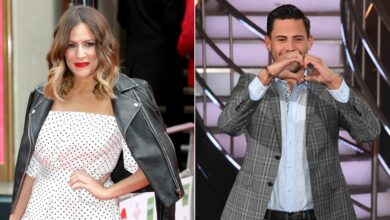 Because of This Picture.. Fans Congratulate Yasmine Sabri on Pregnancy!

Video: Ruby Packs on the PDA With Producer Waleed Mansour.. Have They Become an Item?