The 35-year-old model shared a photo to her Instagram Stories of her wrist adorned with bracelets with her children’s names, including one for Jack.

She and her husband John Legend, 42, announced that their son Jack had been stillborn in September after she suffered significant bleeding

‘Today was your due date,’ Chrissy captioned the somber photo. ‘We love you forever,’ she added with a purple heart emoji. 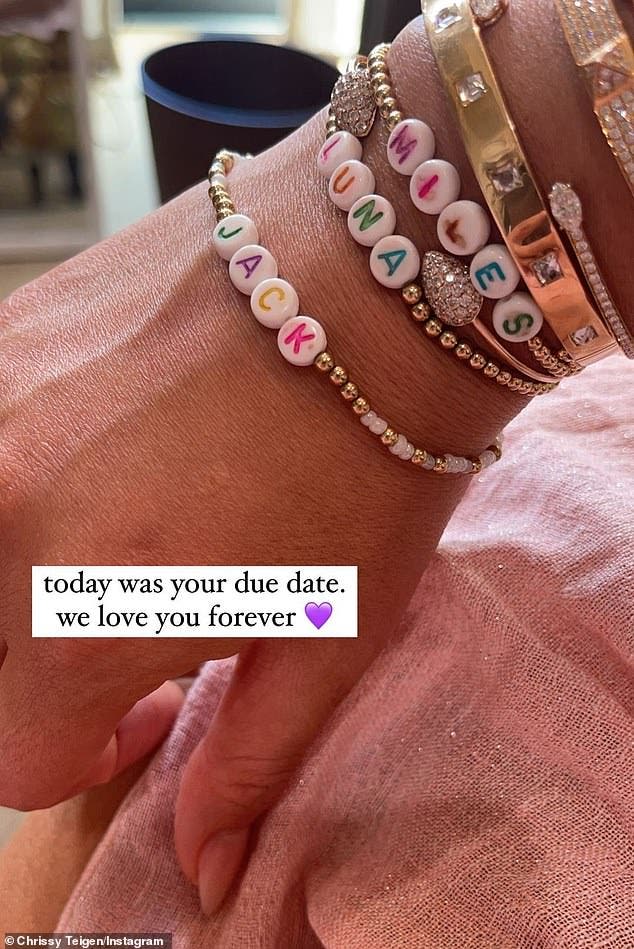 She also wore block-letter bracelets for her children Luna, four, and Miles, two.

The Chrissy’s Court star has had her pregnancy loss on her mind throughout February, as she revealed on social media that she was feeling ‘a bit off.’

‘my little jack would have been born this week so I’m a bit off,’ she tweeted on February 3. ‘I truly feel kicks in my belly, but it’s not phantom. I have surgery for endometriosis tomorrow…but the period feeling this month is exactly like baby kicks. sigh.’

Chrissy and John announced that they were expecting their third child in August of 2020, but she began sharing some of her struggles with heavy bleeding in September. 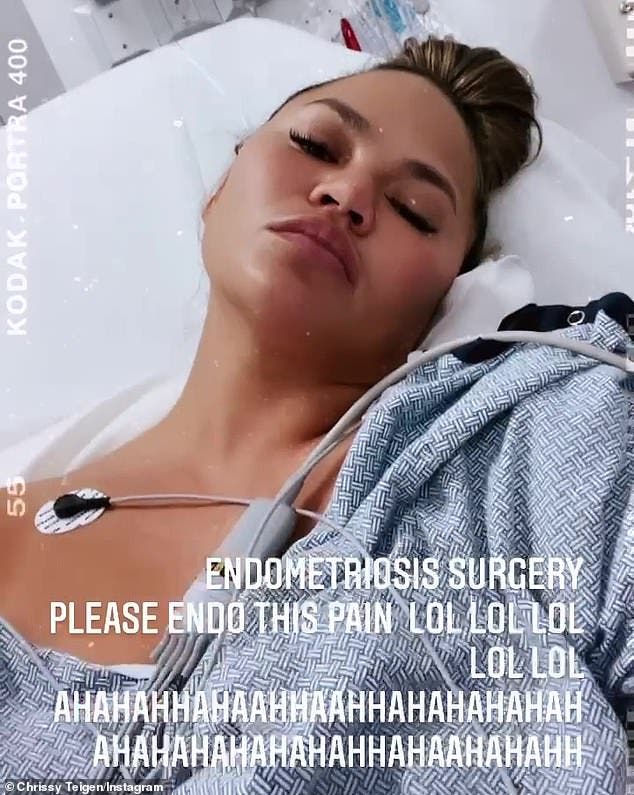 She revealed that she had lost her child in an anguished series a black-and-white photos shared to Instagram.

‘We are shocked and in the kind of deep pain you only hear about, the kind of pain we’ve never felt before. We were never able to stop the bleeding and give our baby the fluids he needed, despite bags and bags of blood transfusions. It just wasn’t enough,’ she wrote at the time.

‘To our Jack – I’m so sorry that the first few moments of your life were met with so many complications, that we couldn’t give you the home you needed to survive. We will always love you.’

Chrissy was seen sobbing on her hospital bed, and her husband comforted her in another heartbreaking photo as they cradled Jack’s body.

She sounded stunned in a tweet posted shortly afterward, writing: ‘Driving home from the hospital with no baby. How can this be real.’

Earlier in February, Chrissy appeared on her friend Ellen DeGeneres’ talk show, where the subject turned to her pregnancy loss.

Ellen called her ‘super brave’ for sharing the unvarnished photos from the hospital, which Chrissy said seemed ‘like so long ago.’

‘Even thinking back to it now, I am still in therapy about it and I’m still coming to terms with it,’ the Bring The Funny judge said, via People.

‘I have maternity clothes, and there are things that I bought for my eighth month and my ninth month. So it’s just hard because he would’ve been born this week, so you look at those things and you have these constant reminders.’

Chrissy was glad to have been ‘raised in a household that was very open about loss,’ which helped her to see how it ‘can be a beautiful thing.’

‘It was a really transformative thing for me and in a way it really saved me, because I don’t think that I would have discovered therapy and then sobriety and this path of feeling good about myself and feeling like a new person.’

She added that her children Luna and Miles have helped to keep Jack’s memory alive.

‘It’s been so beautiful to see my kids, the way they talk about him,’ Chrissy said. ‘We’ll be going to the beach or something and they’ll say, “Is baby Jack with us right now? Do you think he’s up in the clouds?” It’s just so beautiful and so sweet.’

Jennifer Lopez Is Expanding Her Empire Into Your Closet