A little-known Texas state regulator waded into oil diplomacy on Thursday, calling Russia’s energy minister to discuss possible oil production curbs and angling for talks with Saudi Arabia as many producers in the US state’s biggest industry warned it was near collapse.

But at least one analyst scoffed at the regulator’s attempt to broker a deal with Russia and the Saudis, noting that state officials could reduce output in the state if they really wanted, merely by enforcing existing regulations on producers.

US energy companies are losing money on oil production, cutting tens of thousands of workers, and some are struggling to obtain financing. Texas shale producers have been hurt the most as oil prices have crashed two-thirds this year. Last month alone, prices fell by half, to near $20 a barrel, as the coronavirus slashed fuel demand.

On a day that President Donald Trump said he had brokered a deal between Russia and the Saudis to cut output by 10 million to 15 million barrels per day, Texas regulator Ryan Sitton said he pursued an in-person meeting among Russian, Saudi and US officials.

The other two members of the commission, which regulates Texas’ energy industry, have not weighed in on Sitton’s attempt to broker a deal. All three are Republicans.

“This isn’t good for anybody,” Sitton told Reuters. “We’re talking about a destabilization of the global energy market.”

Over the past few years, he and other Texas regulators championed the state’s soaring oil and gas output as Russia and the Organization of the Petroleum Exporting Countries (OPEC) cut production to bolster global prices. State law allows Texas to take steps to limit local production, but it has not done so since the 1970s.

The Oklahoma Energy Producers Alliance this week urged the state’s energy regulator to take steps to curtail crude oil production as oil prices in the state fell below $20 a barrel.

The Alliance also asked regulators to “stop authorizing, permitting and approving the drilling of wells which result in ‘economic waste,'” according to a letter sent to the three commissioners for of the Oklahoma Corporation Commission.

John Kilduff, a partner at Again Capital in New York, said that Texas regulators could avoid the political hazard of ordering production cuts by enforcing natural-gas flaring rules already on the books, which the state has not done.

Texas regulators will meet on April 14 to discuss curtailments in the state, and may vote on any resolution a week later, Sitton said. He is a lame duck on the board, having lost in the March primary to a challenger. His tenure expires in December.

The state’s two other regulators have not publicly endorsed cuts. Commissioner Wayne Christian said he was willing to discuss the topic and Commissioner Christi Craddick has declined to comment. 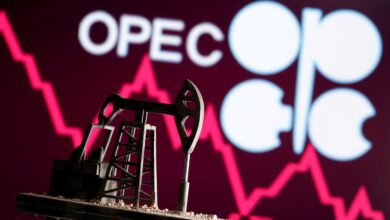 US prepared to authorize Chevron to boost Venezuela’s oil output