Rania, standing cleaning the debris and saving undamaged electronic items at her store after Beirut’s enormous explosion, said she “lost everything.”

“Today I was asked to evacuate as surveyors have marked the building as unsafe for inhabitation and subject to collapse. There’s nothing I could do … August 4’s explosion took it all,” Gholam Electronics shop manager, Rania Ghantous, said.

Ghantous, like many in Beirut, has been left in the dark not knowing, how or who would compensate her for the damages.

Unable to estimate her primary losses though her store is insured, the future remains ambiguous and confusing. The electronics shop is one of many businesses located in areas near the Beirut port, where a massive August 4 explosion wiped out swaths of Lebanon’s capital city.

Now, with the country in the midst of an unprecedented economic crisis before the explosion, many business owners are unsure how they will afford to rebuild.

According to Rania, most of the electronic items – new and those under repair – at her shop were destroyed and that she was packing the unharmed items to move them out as she was asked to leave the damaged building soon. 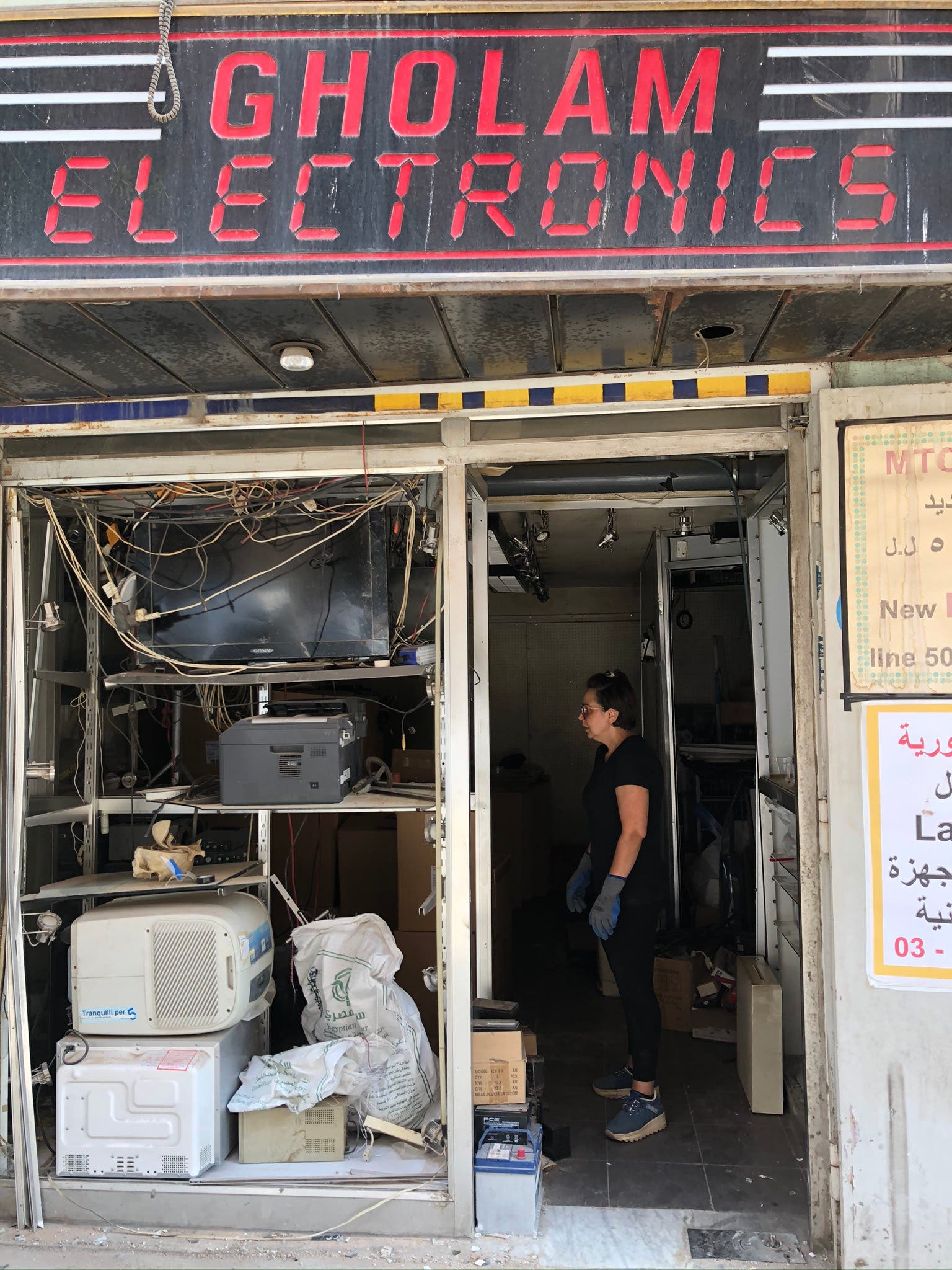 Rania Ghantous in her store in Beirut, Lebanon, which was heavily damaged in the Beirut port explosion August 4. (Sip cafe, located in a trendy Beirut neighborhood, was badly damaged in the August 4 explosion at port in Lebanon’s capital. (Bassam Zaazaa)

“It’s [been] 10 days now. Not a single official checked on us or offered assistance or compensation. They didn’t even offer condolences. It is only those volunteers from the public, who rushed to help us clean and remove the rubble. I have lost everything,” she mumbled bitterly.

It remains unclear yet just how many businesses, restaurants, retail outlets and homes were damaged or destroyed in the areas nearby the port.

For one business owner, he estimates his damages to be around $50,000.

Born in 1952, Toni Shadarevian manages a workshop and an atelier for Krikor Zohrab’s paintings. Zohrab was an influential Armenian painter and writer who was assassinated in 1915.

The workshop and atelier are located opposite the Electricite Du Liban, the state’s large, imposing electricity building that was massively damaged.

A general view of the scene of an explosion at the port of Lebanon’s capital, Beirut, on Aug. 4. (AFP)

The shop contains tens of drawings, according to Shadarevian, who said four of Zohrab’s paintings that are worth $10,000 each were damaged.

“The ruins remain un-estimated, but definitely it is more than $50,000. We are still cleaning up the mess and don’t have insurance to cover our damages. Pre-explosion, the business was already suffering, like Lebanon’s economic situation. The explosion has added up to our financial losses,” said Shadarevian who confirmed that he could reopen the next day.

However, because of the economic situation, there are no clients as no one has money to invest in art, Shadarevian said as he supervised maintenance workers at the shop.

“Even the atelier is in total chaos,” he said.

He added that the explosion pushed the business into the red, as the two premises and the items inside are uninsured.

Down the street, Sip café, once a hip hangout on Gemmayzeh Street, is now gone. The views of the horrific wreckage tell its own story.

With its laid back and trendy ambiance, Sip café used to attract packs of loyal coffee-addicts day and night.

Aside from the financial and materialistic damages inflicted on the café, the owner, Omar Jheir, fractured his arm in the blast that completely destroyed his nearby home. 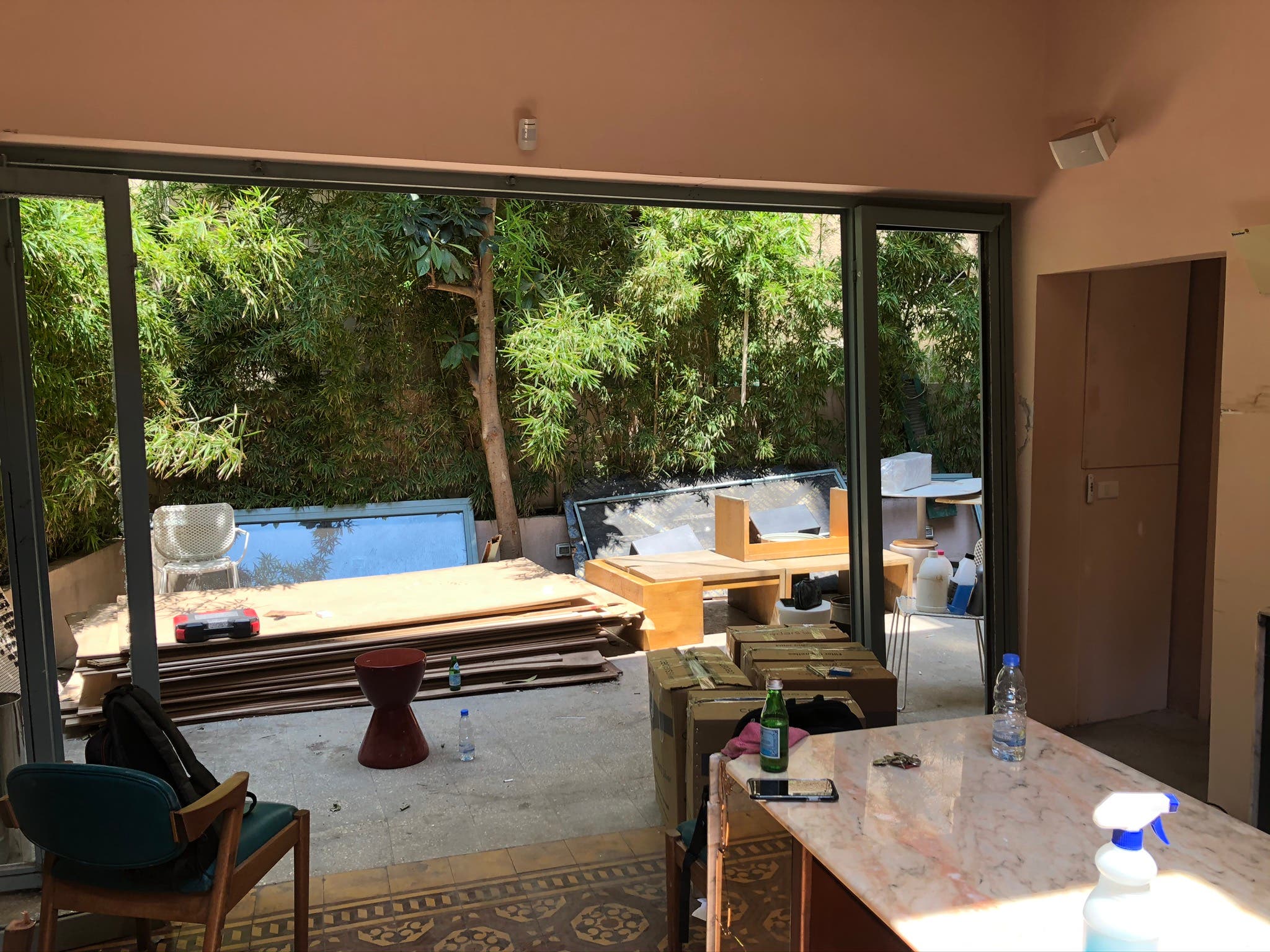 Sip cafe, located in a trendy Beirut neighborhood, was badly damaged in the August 4 explosion at port in Lebanon’s capital. (Bassam Zaazaa)

Estimating the damage as around 70 percent of the actual shop, Jheir said: “Physically there is just the walls that are hanging on … the furniture, machines, façade and glass – everything got damaged.”

When asked if he had communicated with insurance companies, he explained that they are still collecting their data and getting quotations to see what the repairs will cost so he can submit the papers to the insurer.

Without insurance money, Jheir said he cannot afford to repair the café.

Since the October 2019 revolution when Lebanese thronged the street to protest government corruption and a worsening economy, business has slowed for Jheir, who pointed out that Sip was one once of the busiest coffee shops in the neighborhood. 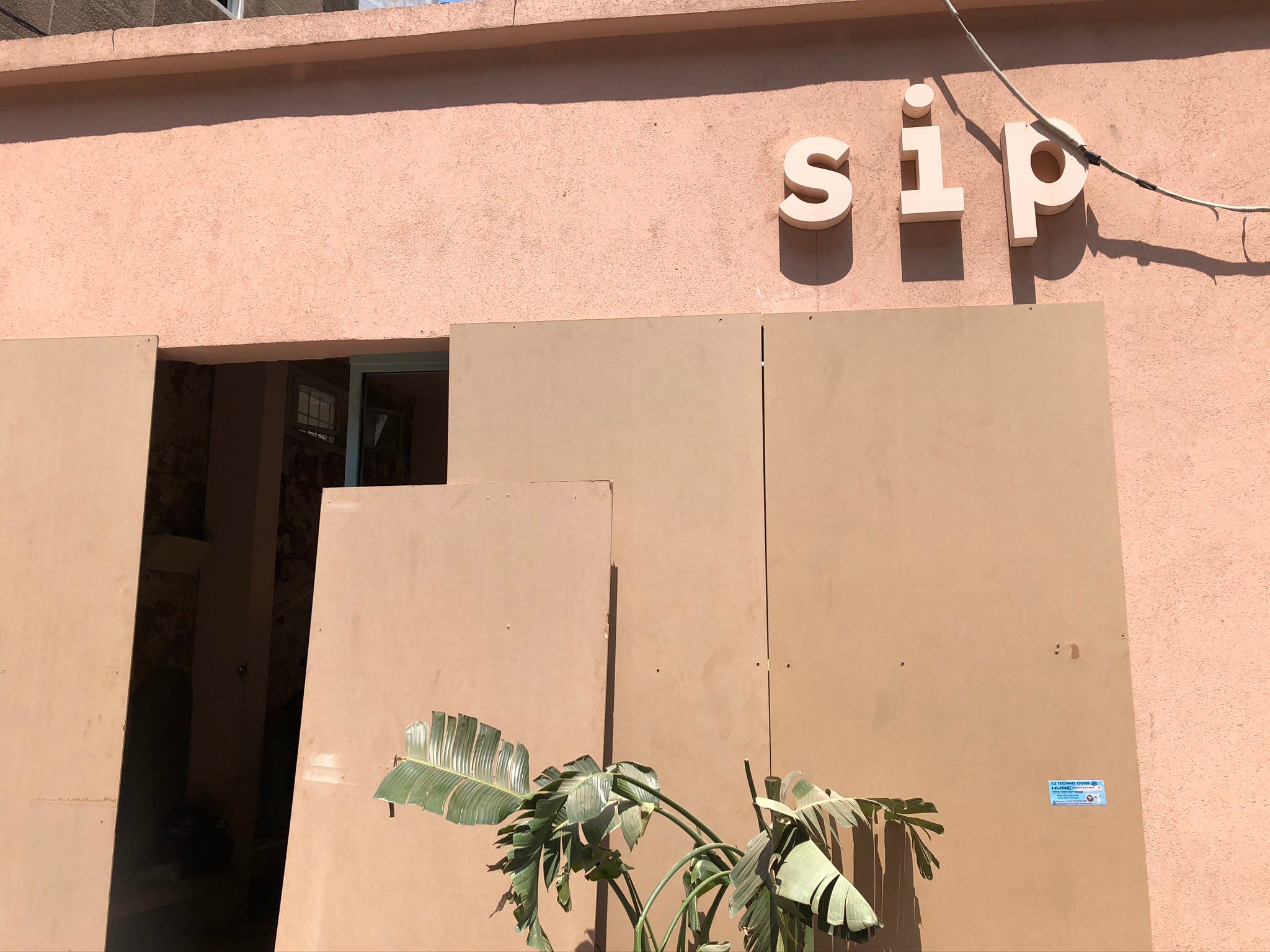 Sip cafe, located in a trendy Beirut neighborhood, was badly damaged in the August 4 explosion at port in Lebanon’s capital. (Bassam Zaazaa)

“People have less money and are spending less. We were already suffering from October 2019 until the devaluation of the currency started … we were still hanging on. The currency was still equivalent to the dollar but when the devaluation happened, it drained our bank accounts,” he said.

Over the past few months, the local currency has been subject to sharp inflation as dollars – needed to pay for imports – have dried up in the country.

Jheir said they bought their supplies with a currency that was 80 percent devalued, but they only increased their prices by 25 percent.

Media reports cited Beirut’s Governor Judge Marwan Abboud estimated the total losses to reach nearly $15 billion due to the explosion of 2,750 tonnes of ammonium nitrate that was stored in hangar 12.

Health ministry officials have said at least 178 have been killed by the blast, and over 6,000 were injured. Nearly 20 people remain missing while rescue teams continue searching. Government estimates say the blast left some 300,000 homeless.

Just 200 meters from the wheat silos that were badly damaged at the port, Nails and Spa was once the business salon in the area.

The owner Elias Hayek was busy removing wrecked machines and assisting his staff in cleaning the debris as he spoke to Al Arabia English.

“Basically 70 percent of the spa was damaged. All machines that we used are destroyed … I had between 10 and 15 machines, each cost between 20,000 euro and 50,000 euro. Walls and ceilings were destroyed,” Hayek said. “The washrooms and tiles remain safe; meanwhile 15 percent of the products are okay.”

Hayek said two of his staff were critically injured, and at the time of writing, one client remained in intensive care.

“I have insurance but we have to wait the investigation’s to conclude and see if we will be compensated,” said Hayek, who fears that they might not be compensated if investigations into the explosion determine the cause was a terror attack or an act of war.

He said no officials checked on them after the blast.

Too risky to reopen

When asked if he could reopen soon, Hayek pointed out that his financial loss is beyond description and that the catastrophe has pulled him down to “below-zero-level.”

He dismissed the potential of reopening soon.

“It will be a major risk to reopen soon because there’s a building that could collapse any moment from the backside of the spa,” he said. 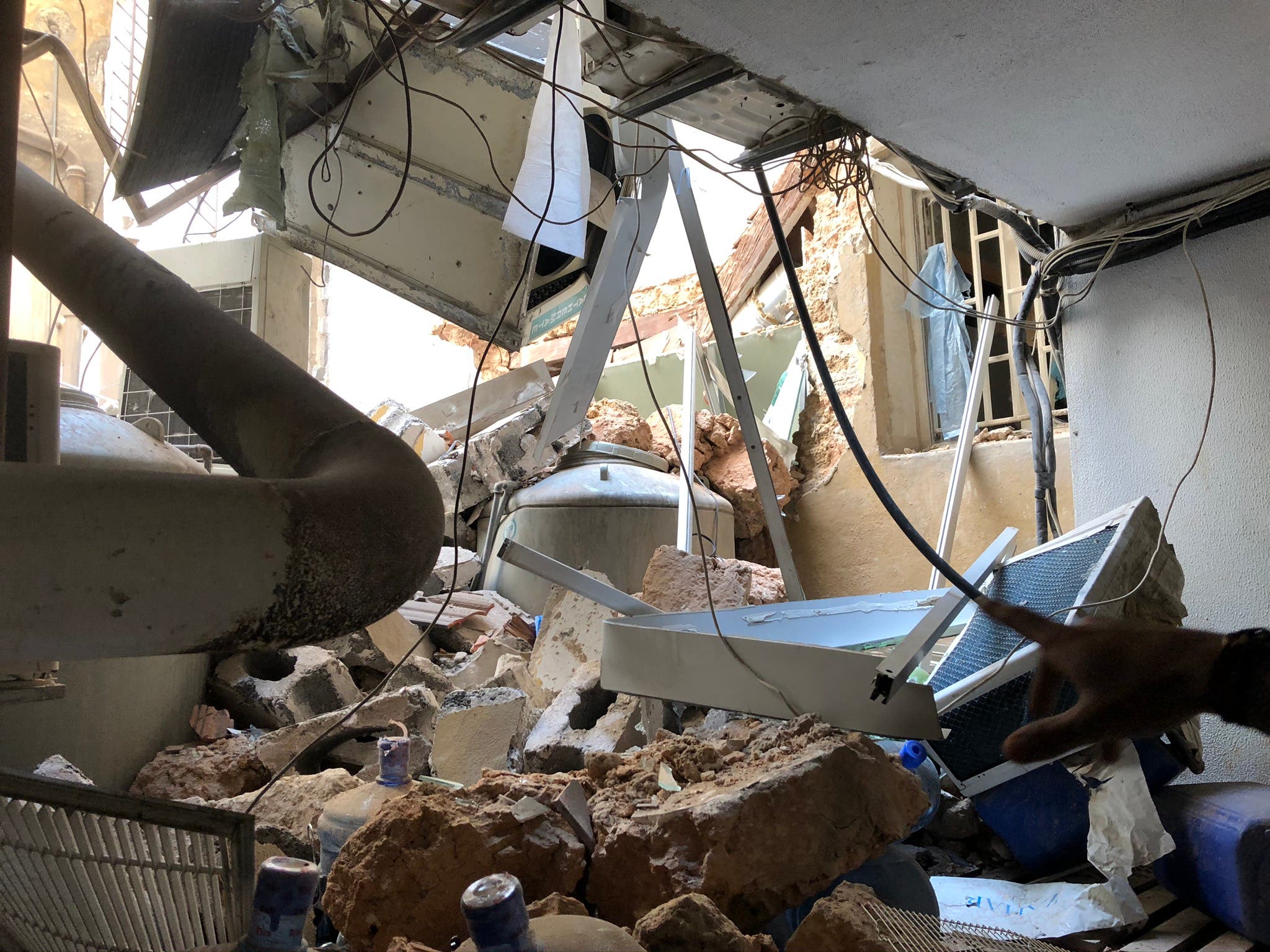 Nails & Spa, a trendy salon in Beirut, Lebanon, was heavily damaged in the August 4 explosion at the Port of Beirut. (Bassam Zaazaa)

The façade of his factory was destroyed, and the building suffered structural damages as well.

“The hydraulic pressers and eccentric presses got badly hurt. I don’t have a rough estimate for our damages but definitely above $15,000. I have insurance, but I am unsure that it will be covered,” Panosian said.

Due to Lebanon’s economic situation and compounded banking crisis, Panosian said that he cannot reopen anytime soon. For months, a series of informal and illegal capital controls have reigned over the banks, and people have been unable to access money in their bank accounts.

He ridiculed recent bank promotions of zero-interest loans describing them by “virtual money” as everybody wants hard cash due to the crisis.

Meanwhile, Al Arabia English contacted a number of insurance company officials, who all said that as long as investigations were underway into the cause of the explosion, nothing can yet be confirmed regarding paying out insurance policies.

“We have to wait for the results of the investigation … if it proves to be an accident then each policy holder will be compensated according to the type and/or clauses of their policies,” said a senior partner in an insurance company.

Turkish currency in further trouble as lira hits 7.49 low against US dollar