After his name was trending in Turkey against the background of the altercation that took place in an Adana hotel, Burak Deniz apologized for the controversy that took place between him and  Nilperi Şahinkaya and her lover Emre Yusuf.

Burak Deniz posted on his Instagram Story for the first time a statement about what happened, saying: “I would like to apologize to  Nilperi Şahinkaya and her friends, as well as to everyone who witnessed the accident that night, for this unfortunate incident in the eyes of the public and my behavior that does not set an example for society.” 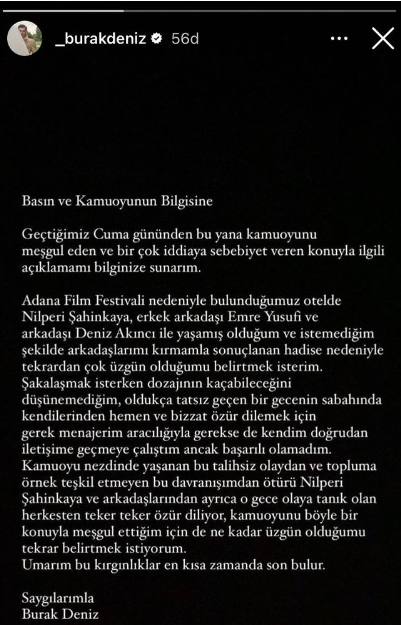 In his statement, Burak Deniz said: “I would like to make my statement on this subject, which has occupied the public since last Friday and caused many allegations. I would like to make it clear that I am sorry once again for the incident I had with  Nilperi, her boyfriend Emre  and her friend Deniz Akinci at the hotel we were in. Because of the Adana Film Festival, which broke my friends in a way I don’t want to.”

Burak continued, “On the morning of an unpleasant night when I wanted to kid around, I tried to contact them directly either through my manager or through myself to apologize immediately and personally, but I couldn’t. I would like to apologize to Nilperi Şahinkaya and her friends.”

Burak added in his apology: “As well as to everyone who witnessed the accident that night about this unfortunate event in the eyes of the public and my behavior that is not a role model for society, and I would like to repeat how sorry I am to preoccupy the public with such a problem. I hope this resentment ends soon with my best regards Burak Deniz”.

According to eyewitnesses and what was published by the Turkish media, Burak Deniz encountered Nilperi Şahinkaya there, and went to her table several times and was very drunk which made Nilperi very uncomfortable resulting in her leaving the table.

Sources claim that Burak responded with insults and started yelling at Nilperi, resulting in an altercation between Emre and Burak.

Against the background of the events, journalist Bersin said, “Burak Deniz should be treated for alcoholism. This is not the first alcohol incident. He had previously driven a car while drunk and hit the postman on his bike.”

‘Little Voice’ Series Will Not Have Season 2