British Prime Minister Boris Johnson has survived a confidence vote that could have seen him removed from power.

Despite profound discontent within his ruling Conservative Party, Johnson won a vote of confidence on Monday by 211 to 148 votes.

Winning the vote means there cannot be another leadership challenge for a year, but the rebellion by 148 of his 359 Conservative Party legislators has dealt a serious blow to his authority.

Johnson put a positive spin on surviving the confidence vote, saying his “convincing” and “decisive” victory would now enable the country to move on.

“I think it’s a convincing result, a decisive result and what it means is that as a government we can move on and focus on the stuff that I think really matters to people,” he told reporters.

The confidence vote was triggered on Monday when party official Graham Brady said he had received letters calling for a no-confidence vote in Johnson from at least 54 Conservative Party members of parliament – enough to trigger the measure under party rules.

Johnson needed to win the backing of a simple majority of the 359 Conservative legislators in the parliament of the United Kingdom to remain in power. If Johnson had failed to secure that majority, the party would have been forced to choose a new leader who would also have become the next prime minister.

Leon Emirali, a former ministerial aide in the Johnson government, said that while there will be a “big sigh of relief” in Downing Street – there will be difficulties further down the line.

Labour Party leader Keir Starmer said the vote showed the “choice” between his party and the Conservatives was clear.

“The choice is clearer than ever before: Divided Tories propping up Boris Johnson with no plan to tackle the issues you are facing. Or a united Labour Party with a plan to fix the cost of living crisis and restore trust in politics,” he said.

Johnson’s leadership has come under intense scrutiny after an investigator’s report late last month criticised a culture of rule-breaking inside the prime minister’s office in a scandal known as “Partygate”.

The report described alcohol-fuelled bashes held by Downing Street staff members in 2020 and 2021, when pandemic restrictions prevented UK residents from socialising or even visiting dying relatives.

Johnson has spent months battling to maintain his grip on power after the controversy saw him become the first serving UK prime minister found to have broken the law.

But Johnson, 57, who won a landslide election victory in December 2019 on a promise to “Get Brexit Done”, had steadfastly refused to resign.

Scotland’s pro-independence first minister Nicola Sturgeon said the “result is surely the worst of all worlds for the Tories”.

“But much more importantly: at a time of huge challenge, it saddles the UK with an utterly lame duck PM. And for Scotland, it just underlines the democratic deficit – only 2 of (Scotland’s) 59 MPs have confidence in the PM,” she wrote in a tweet. 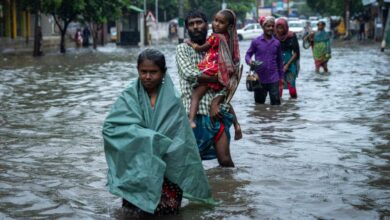