Stars are in shock of the sudden sad news.

Syrian artist Qasem Malho has shocked the art community when he announced the death of the respected Syrian director Hatem Ali at the age of 58.

The Syrian director has passed away in Cairo after suffering a severe heart attack, at the age of 58.

Qasem wrote on Facebook: “Immortality belongs only to Allah.. The great Syrian director has passed away in Egypt”. 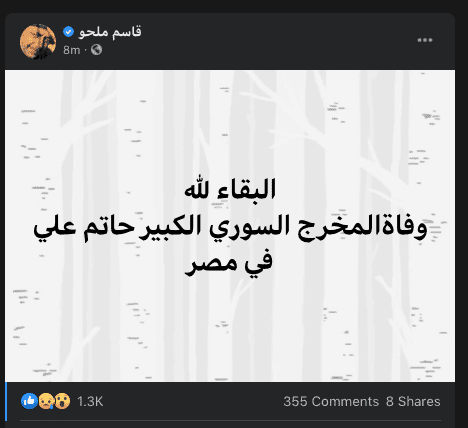 Many celebrities have expressed their shock of the news. Screenwriter Abdul Rahim Kamal said that Hatem’s passing is one of the saddest news describing the late as polite and classy.

Lebanese singer Carole Samaha wrote that she was very saddened by the news calling Hatem a talented director with many successful dramatic projects.

Hatem Ali had started his artistic life with screenwriting and writing novels.

He obtained a BA in Dramatic Arts from the Higher Institute of Dramatic Arts in Damascus, Acting Department in 1986. He is a member of the Syndicate of Artists in Syria, and is married to the Syrian writer Dalaa Al-Rahbi.

Hatem began his artistic career as an actor with director Haitham Haqqi in the 1988 series “Circle of Fire”, then continued his participation in dramas in which he embodied different personalities, ranging from historical and nomadic roles to contemporary characters in multiple styles.

Before his death, the late Syrian director was preparing to direct a historical movie about the famous historical figure, “Zeer Salem,” 20 years after he directed a series of the same name.