Mikhailo Kulishov, 34, is tired of war.

A gentle family man, with a passion for landscape photography, Kulishov has devoted himself in recent years to tourism, specialising in taking people to explore former industrial sites in eastern Ukraine. He has tried to forget the ongoing conflict which forced him out of his home, a mere 40km away, in January 2015.

At an upscale restaurant in his adopted town of Bakhmut, Kulishov spoke with gusto as he described a local salt mine in the Donetsk region that, among other events, hosts a philharmonic music festival.

He paused and poured himself some uzvar, a traditional beverage made with dried fruit and berries. Even with a separatist conflict on the border, the future of Donetsk region looked bright, he said in a serious tone, but now, as tensions between Ukraine and Russia rise, it seems as though history might repeat itself.

“I have already had the experience of having to leave my home,” he said. If shells started to land near his home again, he would not hesitate to leave.

Kulishov was attached to his hometown of Horlivka, also in the Donetsk region. So even as Russian-backed separatists stormed the city hall on April 30, 2014, he tried to convince himself and his wife that the situation would soon blow over.

At first, his optimism seemed well-placed.

The Ukrainian army recaptured parts of Horlivka in July 2014 and had much of the city surrounded. But the separatists held their positions and kept control of Horlivka, pulling the city into months of bitter fighting.

Each day, the shelling got worse, forcing Kulishov, his wife and their young baby to take shelter in their basement. As an IT specialist, he was able to continue working remotely, but when Ukraine suspended banking services to rebel-held territory later that year, he was unable to withdraw his earnings to purchase nappies and food for his family.

Eventually, they had no choice but to flee. “I felt so much sadness and pity, I didn’t want to leave my city,” he said. “But when you compare these emotions to common sense, you know what you have to choose.”

Kulishov is now just one of roughly 1.5 million people displaced by the ongoing conflict in eastern Ukraine, which has killed more than 14,000 people, and the annexation of Crimea in 2014.

Like many of those displaced in Ukraine, Kulishov never expected the move to Bakhmut to be permanent.

He now works for the local tourist board, guiding adventurous travellers around the region’s geological points of interest, including two enormous heaps of chalk waste called the “pyramids” of Rayhorodok. “I like it here. It’s a new home, and I like what I do a lot,” he said.

But with Russia in recent weeks having amassed more than 100,000 soldiers along its border with Ukraine, fears of an invasion are at an all-time high. Kulishov and his family face the very real prospect of having to move again. “If there is trouble, it will be in this area,” he said. “I have the same feeling as before, this ‘military muscle-game’ being flexed around us.”

Amid the current tensions, war-weary residents living along the borderlands in eastern Ukraine appear bereft of panic. Instead, after more than seven years of a perpetual threat of an invasion, many have – at least on the surface – developed an apparent apathy to the latest round of tensions. But beneath this apathy people’s fear and uncertainty are growing around what will happen to the region – and their lives – in the coming weeks.

‘What have we lived through?’

The conflict in eastern Ukraine began in February 2014 after anti-government protests led to the removal of Ukraine’s pro-Russian President Viktor Yanukovych. Russia responded by sending in its military and annexing Crimea, the peninsula on the Black Sea in Ukraine’s south. Then in April, Russian-backed separatists seized territory in the Luhansk and Donetsk regions in eastern Ukraine.

Maksym Khodushko, 42, a fast-talking, gregarious marketing manager sat in an opulent yet bland hotel lobby as he recalled the three months in 2014 when his city of Kramatorsk in the Donetsk region was occupied. “There were arrests, shops were robbed, shopping malls were destroyed,” he said, pointing to Kramatorsk’s busy shopping street just outside the window.

With the city of about 150,000 people controlled by Russian-backed separatists, Khodushko decided to channel his frustrations into online activism to protest his city’s occupation, an activity that the separatist authorities did not approve of. “I am really lucky that nothing happened to me,” he said. “I know people who were kept in the city hall and tortured in the basements for their activism.”

Heavy fighting continued around the city. On June 16, mortar shells began to land about 100 metres from his apartment windows. “The house was shaking, so many windows were breaking,” he recalled. “The part of the city we live in was full of white smoke, sirens howling, people leaving the block. A few were murdered and injured on that day.”

Khodushko’s father and brother were forced to build a makeshift bomb shelter with their neighbours where they would all sleep at night.

It is an experience, he said, that has left an underlying trauma on many residents. “It was only three months under occupation, and then it was life as normal, even better in some ways,” he said. “But sometimes you just stop and think, ‘What have we lived through?’”

Khodushko feels that the months of occupation affected his health. In the years that followed, he began to gain weight and was later diagnosed with a thyroid issue. Noises like fireworks can trigger shock-like symptoms and cause him to start shaking.

Kramatorsk, an industrial and engineering centre, lies roughly 50km from the current front line. However, Khodushko thinks that with the recent escalation of tensions the area could once again be embroiled in conflict.

He believes his city falls in a “grey zone” that Russia would like to use as a buffer between them and NATO member states such as Poland. “Some people think [Russian President Vladmir] Putin wants to build a new Moscow here, but he wants this to be a no-man’s-land,” he said.

If Russia invades, Khodushko said he will fight to protect his Kramatorsk in any way he can, even if it is supplying ammunition or food to the army.

Khodushko feels this time, an invasion would be much more devastating than the previous occupation because Russia could move in with the full force of their army and air force.

“After our experience during occupation,” he said. “I know a lot of people in Kramatorsk would flee if there was a full invasion.”

There is no large-scale Ukrainian military build-up in Kramatorsk, but small changes suggest to Khodushko that the army senses there is an increased threat of an invasion. For example, on a recent walk just outside the city, he noticed seemingly new trenches facing east. With the existing trenches much closer to the front line, about 45km away, this could suggest the Ukrainian army has prepared an extra line of defence if the first is breached. 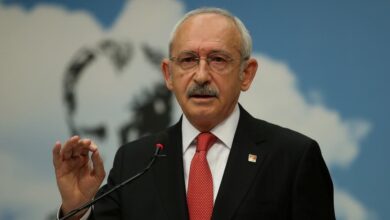 Use of facial recognition in Delhi rally sparks privacy fears 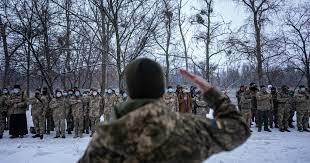