US Secretary of State Antony Blinken and Ukrainian Foreign Minister Dmytro Kuleba met on Ukraine’s border with Poland on Saturday to discuss Western efforts to support Ukraine and isolate Russia during the current war, now in its 10th day.

Amid tight security, Blinken and Kuleba held talks in a tent on the border where refugees, mostly women and children, were also crossing with their belongings in rolling luggage and backpacks.

The two men walked on both sides of a painted line that appeared to mark the end of Polish territory.

“The entire world stands with Ukraine, just as I am standing here in Ukraine with my friend, my colleague,” Blinken said.

Kuleba added: “I hope the people of Ukraine will be able to see this as a clear manifestation that we have friends who literally stand by us.”

The two discussed the provision of weapons to Ukraine and the campaign to isolate Russia internationally and damage its economy with sanctions, Kuleba said.

Ukraine will win its war with Russia eventually, he said, but its international supporters need to provide more help to end the conflict sooner.

“If they continue to provide us with necessary weapons, the price will be lower. This will save many lives,” he said.

Kuleba said he saw no progress in talks with Russia on a ceasefire being held on Ukraine’s border with Belarus, but “we have to continue talking”. A third round is scheduled for Monday.

Pressure on Russia ‘will grow’

The number of refugees could rise to 1.5 million by the end of the weekend from a current 1.3 million, the head of the United Nations refugee agency said on Saturday.

Blinken arrived in Poland from Brussels, where he met foreign ministers from the NATO alliance, the G7 grouping and the European Union on Friday to discuss the West’s efforts to deter Russia through a program of harsh sanctions.

Blinken said the sanctions were producing “concrete results”, referring to the damage to Russia’s economy in recent days. “That pressure too will not only continue, it will grow until this war of choice is brought to an end,” he said.

NATO members are providing military aid to Ukraine, much of it passing through Poland. But it has declined Ukrainian demands to enforce a no-fly zone over the country, saying this could provoke a much broader and even more dangerous conflict.

Russia describes its actions as “a special military operation” whose aim is to disarm Ukraine, counter what it views as NATO aggression and capture Ukrainian leaders it calls neo-Nazis. The fallout of Russia’s grain blockade 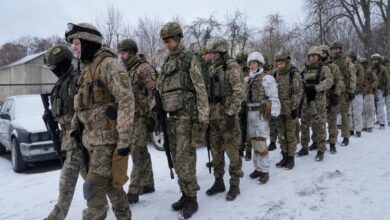