On Tuesday, the 18-year-old singer announced that she will sing the theme song for the upcoming James Bond film No Time To Die, making her the youngest performer to tackle the honor. Using the same title as the highly-anticipated flick, Eilish will be teaming up with her brother and music partner Finneas O’Connell to create an “incredibly powerful and moving song” for the milestone film.

“We are excited to announce that Billie and FINNEAS have written an incredibly powerful and moving song for No Time To Die, which has been impeccably crafted to work within the emotional story of the film,” No Time To Die producers Michael G. Wilson and Barbara Broccoli said in a press release.

Excited by the honor of singing the theme song for the 25th James Bond film, Eilish said, “It feels crazy to be a part of this in every way. To be able to score the theme song to a film that is part of such a legendary series is a huge honor. James Bond is the coolest film franchise ever to exist. I’m still in shock.”

Chiming in, Finneas added, “Writing the theme song for a Bond film is something we’ve been dreaming about doing our entire lives. There is no more iconic pairing of music and cinema than the likes of Goldfinger and Live And Let Die. We feel so so lucky to play a small role in such a legendary franchise, long live 007.”

Hinting that the big announcement was coming, Eilish shared pictures of past Bond Girls to her Instagram Stories. Among them were Halle Berry, who starred in 2002’s Die Another Day. Prior to the news, fans thought Beyoncéwas a shoe-in for the spot based on her cryptic Instagram post, which featured a martini.

Is Beyonce Writing the New James Bond Theme Song?
Who knows, maybe this will begin her campaign as an EGOT winner. All she has to do is, you know, win an Emmy, Grammy, Oscar and Tony award…

From the looks of it, she’ll have no problem checking off the “G.” Eilish is currently nominated for six awards at the 2020 Grammys, including the night’s biggest awards Song of the Year, Record of the Year and Best New Artist. She is currently the youngest nominee to earn nominations in all of the award show’s four major categories.

Catch Billie’s theme song in No Time To Die when it premieres on April 10. 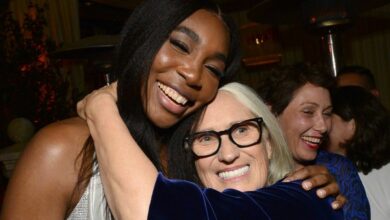 Doctors: Britney Spears’ Father Should be Removed as Conservator

In Video: Nelly Karim’s Husband Screamed at Her Fans in Carthage Festival